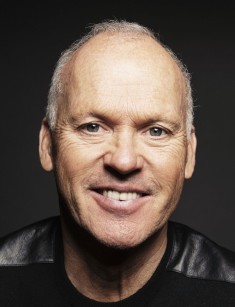 Michael Keaton in the movie BirdmanMichael Keaton is a famous American actor, producer, and director. His filmography has more than 50 roles that were included in the history of world cinema. He played in Batman, Beetlejuice, Birdman and other remarkable movies that left an indelible mark in the hearts of viewers.

Michael John Douglas (actor’s real name) was born on September 5, 1951, in the town of Coraopolis, near Pittsburgh in Pennsylvania (USA). The future actor grew up in a large but not creative family of Scottish-Irish descent. Michael was the youngest of seven children.

His father, George A. Douglas, was the only breadwinner and worked as a civil engineer and surveyor. Mother, Leona Elizabeth, came from McKees Rocks, was a housewife and raised children in accordance with Catholic traditions. Despite this, Michael was a careless child, and he was not good at studying due to the lack of diligence and attentiveness.

After graduation, Douglas moved to "The Buckeye State" – Ohio, where he studied speech at Kent State University. But two years later, Michael became bored with philological discipline. So, the young man cast prudence to the winds and went to conquer Pittsburgh. The young guy worked as a model, a security guard, and also sold alcoholic cocktails in a bar in the city of great opportunities. The dream of an acting career crossed Douglas's mind by accident, and he went to local clubs without hesitation, hoping to conquer viewers’ hearts with sparkling humor.

According to Michael, the job of a stand-up comedian is the best training for a novice actor, because if there is a room for mistake in a movie, then there is no such right during a live performance in front of the audience. If a comedian does not catch viewers’ attention within a few minutes, he will be without income the next night. Therefore, this experience in the life of Douglas was very useful. In addition, Douglas tried his hand as a theatre actor and operator, but Michael did not succeed in Pittsburgh. Therefore, in 1975, the young man moved to Los Angeles, where his creative biography began.

Michael began his career with a few minor roles in TV series. When the young man got a job in the cinema, he was told that there already was an actor called Michael Douglas. So, the man was asked to come up with a creative pseudonym to avoid confusion. Without thinking twice, he just recalled all familiar surnames alphabetically to his mind, and the beginning actor chose “Keaton”. Thus, Michael chose at hazard his nickname, which later became associated with the great actor. Although some sources say that the young man paid tribute to comedian Buster Keaton or actress Diane Keaton in this way.

Keaton debuted in a full-length film in 1982. It was the comedy film Night Shift by famous director Ron Howard. It is noteworthy that Michael played the minor role of Bill Blazejowski in the film, however, the novice actor attracted the attention of the audience and won the Kansas City Film Critics Circle Award for Best Supporting Actor.

In 1983, Michael participated in the shooting of the film Mr. Mom, which tells of a fired employee of a large company, Jack Butler. However, by a happy coincidence, Jack's wife (Teri Garr), unlike her lover, climbs the career ladder. So, all household duties and childcare are falling on the man's shoulders.

In 1984, Keaton starred in Amy Heckerling’s comic thriller Johnny Dangerously, and in 1986 he played the major role in the film Gung Ho. In 1987, Michael was lucky to star in the cult thriller The Squeeze by director Roger Young. Keaton played a simple gambler, Harry Berg, in this film, who was trying to expose the lottery scammers of New York, while playing detective.

In 1988, the small actor (Keaton's height is 175 cm) played an eccentric "bio-exorcist" expert Betelgeuse in the macabre movie by Tim Burton under the same name. It is noteworthy that initially, Michael turned down the role of a ghost because he could not understand what the master of phantasmagoria wanted. Tim was not able to explain everything that happened in his head. However, Burton and Keaton found a common ground after the second meeting. Thus, the audience saw a cult film about extravagant ghosts.

By the way, the director said that Alec Baldwin and Geena Davis’s mediocre play-acting got negative reviews from critics. However, Keaton, whose screen time was just over 17 minutes, managed to make the movie bright and unforgettable, thus, he was nominated for the Saturn Award: Best Supporting Actor.

In 1989, Keaton (the first choice was Mel Gibson) transformed into a superhero in the famous gothic fairy tale Batman by Tim Burton. Almost every movie and DC comics fan knows the plot of the fantastic thriller. When Bruce Wayne was a boy, he became a witness to the murder of his parents. Since he has hated the underworld. Thus, when night falls, the "Batman" cleans the city of evil people and saves the lives of innocent citizens. But, as a rule, any protagonist has an antagonist, whose role was played by the villain Joker (Jack Nicholson).

The actor had a creative career crisis after the film Batman Returns (1992). Some subsequent films had a relative success but Michael starred in Quentin Tarantino’s action movie Jackie Brown (1997) to regain his fame. He played also in such remarkable films as Jack Frost (1998), A Shot at Glory (2000), Live from Baghdad (2002), etc.

A new chapter in Michael Keaton’s acting career began in 2013. He filmed in the movie Penthouse North, where he played a sadist and psychopath, Hollander, and in 2014 he played in the remake of the film by Paul Verhoeven RoboCop.

The same year, Keaton had a stunning success, because the movie Birdman, where he played the main role of Riggan Thomson, brought the actor more than ten prestigious film awards, including the Golden Globe, Independent Spirit, Satellite and etc. Edward Norton, Emma Stone, Naomi Watts and other famous movie stars starred in this tragicomedy too.

In 1982, Michael married Caroline McWilliams, and the relationship lasted until 1990. The actor had a son Sean Maxwell Douglas (1983) in the first marriage. It is also known that Keaton dated Courteney Cox, the famous actress of the series Friends. According to rumors, the actor has close relations with his son. For example, Michael refused to participate in the filming of the Police Academy, The Fly and Lost in order to spend with Sean as much time as possible.

It is noteworthy that Keaton does not pursue fame and money but works for pleasure. For example, he was offered $ 15 million for the film Batman 3, but he refused to participate in this project because of a stupid script (according to the actor's opinion).

Michael travels, goes for a long walk with a dog, does sports and supports his favorite Pittsburgh Pirates baseball team in his spare time. It is worth mentioning that Keaton uses the popular network Instagram, and also shares the news with fans on Twitter.

Villain Adrian Toomes, nicknamed Vulture, whose role is played by Michael Keaton, will appear in the film.