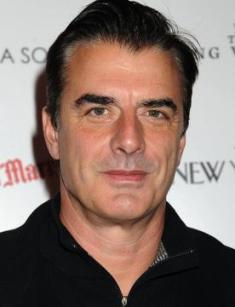 Christopher David Noth, better known as Chris Noth, is an American actor famous for his popular TV series Law & Order, Sex and the City and The Good Wife. After the role of Ben Cooper in the romantic comedy The Perfect Man, Noth got the nickname "the perfect man."

Christopher was born in Wisconsin, in the town of Madison. The boy was the youngest of the three sons of the insurance agent and marketer Charles James Noth and his wife Jeanne L. Parr, a journalist. When Chris was 12 years old, his father was in a terrible car accident and died of his injuries. The boy with his mother and brothers began to lead a nomadic lifestyle.

The fact is that Jeanne, after her husband's death, signed a contract with the famous CBS television company and began to travel around the world as a reporter. Christopher managed to live in England, Spain, France, and Czechoslovakia, but the family did not stay anywhere for long.

Of course, it was difficult to get a systematic education in such conditions. Yes, and Chris Noth himself from childhood did not aspire to scientific activity. The boy discovered his artistry early on. The teenager not only read and recited plays but also created poems of his own composition. Moreover, in high school, the young man did not miss a single school performance. And before the beginning of the performance, Chris was not in the hall, but behind the scenes.

After school, the young man entered a prestigious American university - Yale School of Drama, where he studied drama for four years. Then began his career as an actor on television. Already becoming a mature and established actor, Chris Noth has made his dream come true and played in the theater, including in the classic Shakespearean productions, which he read as a child.

The first movies with the participation of Chris Noth came out on the screens in the early '80s. It was a variety of genres of television series, Another World, Waitress!, Hill Street Blues. The actor embodied in the episodic characters, who nevertheless had bright personalities. In 1987, the actor appeared in the dramatic family saga I'll Take Manhattan and the comedy Baby Boom.

And then, the artist received a proposal to play Detective Mike Logan in the rating and popular series Law & Order. Interestingly, the original character of Chris Noth planned as a temporary. However, the fans of the film so much loved the actor, that eventually Logan became the central character in the story.

The series was broadcast on NBC channel for 20 years. Over time, the TV project grew to a franchise, which included adaptations, spin-offs, and video games on the theme of the series. The filming was held on the sidelines of the court, including the streets of New York and the road to Chelsea Piers, where most often shot scenes with the main characters, the city authorities renamed the "Road Law & Order."

When in 1995, the leaders of the project Law & Order decided not to sign a new contract with Chris, it turned out to be a real shock for the fans of the detective. All the viewers, as one said that the soul left the show. Producers had nothing left to do, as a few years later, to run the serial sequel Law & Order: Criminal Intent and return Noth to the same role. There, the actor played the famous detective Logan for the next ten years.

Chris was not afraid to remain a hostage of one role, and the actor was not mistaken. In 1995, in the drama Nothing Lasts Forever by Sidney Sheldon Noth played Dr. Ken Mallory, a doctor of the clinic, where the three main characters Page, Elizabeth and Kate (played by Gail O'Grady, Brooke Shields, Vanessa Williams), one of which helps to die a cancer patient. After the death of an older person, it is revealed the fact of euthanasia, which is not permitted by law, and the proceedings begin.

In the mid-90s, the actor also appeared in the family fantasy Touched by an Angel and the criminal thriller Cold Around the Heart. The filmography of Chris Noth replenished the works in the comedies Rough Riders and The Deli.

Besides, Chris Noth managed to show his best side in the romantic series Sex and the City, where he appeared as a partner of Sarah Jessica Parker. The project was the second one in the artist's creative biography, thanks to which Chris finally became one of the first-class TV actors. The artist was in demand among masters of the movie industry. Since then, Chris' repertoire has included more and more roles in full-length movies.

In 2000, Chris Noth received the secondary role in the adventure film Cast Away by Robert Zemeckis, then followed the work in the criminal comedy Double Whammy, thriller The Glass House, the psychological drama Searching for Paradise.

In the rating TV project Julius Caesar, Chris Noth tried on the image of the Roman general Pompey, and in the comedy Bad Apple, he appeared in the role of an FBI agent. Chris Noth also appeared in the sports melodrama Mr 3000 and the comedy The Perfect Man, where the actor embodied the image of Ben, a man of dreams. In 2009, in the adventure movie My One and Only, Chris Noth starred opposite Renée Zellweger, Nick Stahl, and Eric McCormack.

Other star works of the actor are considered to be the criminal thriller The Judge and the comedy After the Ball. In 2009, the actor accepted an invitation from the creators of the legal series The Good Wife, where he appeared in a creative duet with Julianna Margulies. Noth' s character, prosecutor Peter Florrick, goes to prison on charges of corruption, but thanks to his wife, who works as a lawyer, is released, and later wins the election for the post of a state governor.

Of the latest works of the actor stand out role in the biographical drama Lovelace and the melodrama Elsa & Fred.

During the 90s, Chris Noth was dating an American model Beverly Johnson, who was a couple of years older than the actor but looked 20 years younger. Then the artist had a short relationship with a colleague from Hollywood Winona Ryder. As Chris told in an interview, when he saw Winona, he realized that inside the bright and bright flash lit up. The woman seemed to the artist to be a celestial woman and "the artist's muse." But these feelings cooled down as soon as they were born.

Touching upon the topic of personal life in interviews, Chris Noth always mentioned that he liked women with a subtle sense of humor and Asian appearance. The actor's choice of wife proved the truthfulness of these words.

In 2003, Chris Noth had a relationship with the Canadian model and actress Tara Wilson, who in 2007 became a co-owner of Chris Noth's bar The Cutting Room.

Tara and Chris had been in a relationship and living together for eight years until they were officially married in 2012. The marriage ceremony was held on Maui Island, Hawaii. By that time, their son named Orion Christopher had already turned four years old. The son became the main keeper of the newlyweds' rings at the event.

The actor turned out to be a good businessman. As soon as Chris started earning decent fees, starring in the series Law & Order, he opened a nightclub The Plumm in Manhattan, NYC. Then followed the organization of a thematic tea restaurant Once Upon a Tea Cup in Canada, as well as the New York cafe The Cutting Room, which is mainly used as a meeting place for professional musicians.

In recent years, fans of the actor noted that Chris Note has aged, which is no longer hidden in the photo and in front of the camera. But at the same time, fans of the artist, discussing on Instagram about the age changes of the star of the screen, note that Chris looks decent for his age.

In the number of new projects in which the actor is now involved, it is clear that Noth is not going to retire in the near future. In 2016, Chris Noth starred in the movies White Girl and Chronically Metropolitan. A year later, work followed in the series Manhunt: Unabomber. In 2018, with the participation of Chris Noth in the role of FBI agent premiered the TV series called Gone. Chris Noth has an estimated net worth of $15.5 Million.