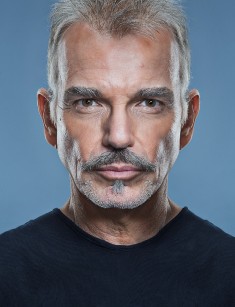 Billy Bob Thornton is an American actor, who became popular thanks to the films Bad Santa and Love Actually. Thornton became world famous after performing the role of Karl Childers in the drama Sling Blade for which he wrote the screenplay. He was awarded the Oscar for this work as a screenwriter.

Billy Bob Thornton was born in Hot Springs, Arkansas. The mother of the future actor Virginia Roberta Faulkner was engaged in the esoteric and worked as a medium. Her forefathers were Italians and the Indians. Father Billy Ray Thornton was an Irishman and worked as a lecturer of history at the local University. He was also the head of the student basketball team.

Billy has two brothers, Jimmy Don and John David. The family lived in an old house where there was not even electricity. It is an interesting fact that at the age of 7 months he weighed nearly 14 pounds and got into the Guinness records book of Clark County, as he was the heaviest baby.

Thornton studied at the public school and distinguished himself as a good athlete, but in childhood, Billy Bob together with his brothers dreamed of becoming a famous musician. He played drum set in the school band Stone Cold Fever and later he performed as the vocalist with the band Tres Hombres, where he sang several songs written by his brother Jimmy.

Upon graduation in 1973, Thornton came to professional baseball club Kansas City Royals thanks to good sports results. But soon he got a knee injury which put an end to the career of the player. Billy Bob worked as an asphalt paver for a few months, but the following year he entered the Henderson University, where he specialized in psychology. However, the young man managed to study at the University only 2 semesters, then he was expelled.

In the mid-1980's Billy Bob Thornton moved to Los Angeles and decided to develop an acting career. He worked as a waiter, salesperson of household chemical goods, a worker of fast food restaurants between auditions and casting. He also played drums with folk band Jack Hammer.

First Billy Bob played in episodes of television series and sitcoms. But in 1992, he starred as a police officer, Ray Malcolm, who investigated a crime in Arkansas in the detective drama One False Move. It is interesting that Thornton was also a co-author of the script, helping Tom Epperson. He met Tom in one of the restaurants when he worked as a waiter. The actor drew the attention of experts and spectators thanks to a dramatic story and a good performance.

But psychological drama Sling Blade brought him world fame. He wrote the screenplay for it and also acted as a director and actor. Thornton played a mentally retarded man who spent the best years in a psychiatric hospital for an unexplained murder. The film became very popular and Billy Bob received the Oscar Award as the Best Screenwriter, as well as many other awards as an actor. It was the beginning of a new level in his creative biography.

After such a success Thornton had no problems with the proposals from directors. The actor starred in a large number of famous films, including the science fiction disaster film Armageddon with Bruce Willis in the main role, where Thornton played Dan Truman, NASA Administrator. In 2001, the drama Monster's Ball was released with the participation of Thornton, where Halle Berry and Heath Ledger also played the main characters. The film tells the story of a hereditary professional executioner who decided to change his own life after the suicide of his son and getting acquainted with a dark-skinned woman.

The same year, the filmography of Billy Bob included the eccentric parable Man Who Wasn’t by the Coen brothers and the criminal comedy Bandits. The actor also appeared in the New Year tragicomedy Love Actually, where he played the US president. The last picture has become virtually obligatory for Americans to watch in the winter holidays.

In 2003, the actor played a homeless person, a lustful alcoholic, and loser Willie in the black comedy Bad Santa. The film was a huge box office success, and critics said that it destroyed all stereotypes about Christmas movies. The comedy also mocked the problems of society related to political correctness beyond common sense.

It is an interesting fact that Billy Bob Thornton got the role of Bad Santa, being ahead of such movie stars as Jack Nicholson and Bill Murray. This role has brought the actor the fame of the comic, who is capable to make people laugh almost for no reason at all.

The comedy School for Scoundrels increased his fame. The role of Dr. P was written especially for Thornton. The actor was awarded a star on the Hollywood Walk of Fame after playing in this movie.

Thornton can work in various genres. In addition to comedic roles, the actor transformed into a military man, playing the image of the hero of the Civil War, David Crockett in the drama The Alamo; into football coach Gary Gaines in the sports movie Friday Night Lights; into the robber Vic Cavanaugh in the action movie Ice Harvest; into the Astronaut Farmer in the film under the same name.

In 2007, Thornton again became the main character of the comedy, starring in the movie Mr. Woodcock. A year later, the actor starred in two thrillers Informers and Eagle eye. The artist had the opportunity to transform into a policeman, who fought with the underworld, in the action movie Faster. Thornton played the image of a secret agent in a biographical film about Kennedy’s murder Parkland.

In 2014, Billy Bob Thornton participated in the popular sitcom The Big Bang Theory where he played elderly Dr. Lorvis, who heated up at the slightest touch of any woman. The same year, the actor starred in the role of a sociopath and criminal in the mini-series Fargo, created in the genre of black comedy. Thornton's partner on the set was Martin Freeman, the British actor who played Dr. Watson in the sensational series Sherlock. The film Fargo was broadcast on the FX channel and brought to creators a number of international awards. Film criticism awarded Thornton's excellent work with the Golden Globe Award.

When Billy Bob Thornton became a famous actor, he resumed his musical career and recorded several solo albums in the country style, which included the songs of his brother Jimmy Don “Island Avenue” and “Emily”, which Billy sang as a teenager.

Thornton organized his own band The Boxmasters after releasing 4 solo albums. He tours around North America and records the album in the country and rockabilly styles with the band.

Thornton writes lyrics and sometimes dedicates them to loved ones. For example, in 2001, he wrote the song “Angelina”, where told about his feelings for his wife Angelina Jolie.

Billy Bob Thornton was married 6 times and has 4 children. In 1978 the actor married Melissa Lee Gatlin. They were married for two years and had a daughter, Amanda. In 1986, Billy married an actress, Toni Lawrence. They split up a year later and the following year divorced officially. His next wife was the actress Cynda Williams and they lived together for two years. In 1993, Thornton became a husband of model Pietra Cherniak who gave birth to his sons, Harry James and William. The marriage was broken in 1997 when the wife accused Billy Bob of the family violence.

The next actor’s wife became the famous actress Angelina Jolie in 2000, who was almost 20 years younger. Their relationship was very eccentric. The couple showed openly affection to each other, they even wore a locket with a drop of partner’s blood. They divorced two years later.

Since 2003, Billy Bob Thornton lived in an open-law marriage with makeup woman Connie Angland, who gave birth to his daughter Bella. Billy and Connie publicly stated they did not intend to legalize their relationship. However, in October 2014 they got married.

Thornton has got a large number of phobias due to the large health problems, from the common fear of air travel to unusual phobias of antiques. It is interesting that the actor doesn’t smoke, though he can be seen with a cigarette in many roles.

The star is an honorary citizen of his native town Hot Springs. Its mayor has perpetuated his name by declaring one day of the year an official holiday named Billy Bob Thornton.

Thornton leads a quiet life, the actor does not have any accounts on social networks, including Instagram. Actor’s photos can be found in great numbers on web resources.

In 2016, the comedy Whiskey Tango Foxtrot with the participation of Thornton was released. It tells about the adventures of an American journalist in Pakistan. The same year, the shooting of the second part of the franchise Bad Santa was finished. The actor appeared in front of the audience in the familiar image of the hero Willie.

In October, the premiere of the legal series Goliath took place, where the actor played the role of lawyer Billy McBride, who was fired and he had to look for clients himself. But once the lawyer had the opportunity to revenge on the former bosses. The first season received high ratings and positive critics reviews. So, in 2017, the creators announced the continuation of the series.

Now the actor is playing the main role in the criminal detective The London Fields, where according to the plot, fate linked together with a deadly writer and a beautiful woman (Amber Heard), who is hunted by two assassins.

In the near future, the premiere of such movies as the drama Peace Like a River and the sports comedy Three Nights is planned, where Billy Bob Thornton also plays. 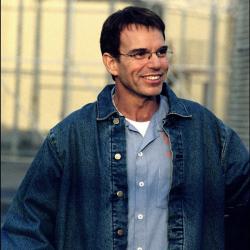