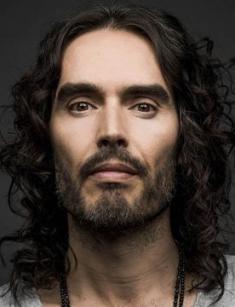 Russell Brand is a well-known actor, comedian, eccentric TV host and author, whose fate was difficult, but he managed to find the strength and get rid of drug addiction. Nowadays, Russell is the patron of the Focus 12 drug treatment program.

Russell Brand was born on June 4, 1975, in the town of Grays, located in Essex, a ceremonial county in the south-east of England. He was the only child in the creative family of photographer Ronald Brand and his wife, Barbara Elizabeth. Unfortunately, when the boy was six months old, his parents decided to separate and soon filed for divorce.

It is difficult to say that the actor's childhood was happy. He was brought up by a single mother, and the woman often did not have enough time to raise her son. So, Russell lacked parents’ affection and love and was left to his own devices. Therefore, it is not surprising that Brand had bouts of loneliness. Besides, the cruel fate seemed to deride the child, making him endure hard days.

Firstly, when Russell was seven years old, he was sexually assaulted by his teacher. Secondly, a year later, his mother contracted uterine cancer, and then breast cancer. While Barbara underwent treatment, Russell lived with his relatives.

Therefore, it is not surprising that Brand suffered from bulimia nervosa. The young man ate an unusually large amount of food to distract himself from spiritual torments. He overate during breakfast, lunch, or dinner, which ended with vomiting.

Then it only got worse, because the young man, who could not find common ground with his stepfather, left school and home. Living on the edge of life, Russell found solace using drugs. Russell used illegal drugs: cannabis, amphetamine, LSD, ecstasy, cocaine, as if he was the hero of Hunter S. Thompson's novel "Fear and Loathing in Las Vegas."

Russell also had a strange relationship with his biological father. When Ronald Brand saw his son, he took the young man to the red light districts to meet women of easy virtue.

Russell Brand began his career on the stage of the school theater. It was the production of the musical gangster comedy movie Bugsy Malone. Russell was so fascinated with acting that he began to work as a film extra.

The young man decided that he needed proper education. He was initially accepted to the Italia Conti Academy and then became a student at the Royal Academy of Dramatic Art. However, the man was soon expelled from the universities due to his drug addiction. Moreover, he could do self-harm. One day Russell was criticized for his performance, and the quick-tempered man broke a bottle and cut himself. He used fake blood for greater effect.

Since Russell could not study in the drama school, he focused on the comedy genre. He made his stand-up debut in 2000 at the competition for comedy and variety acts. Brand finished fourth, but attracted the attention of a talent agent. Thus, in 2004, Russell already got a golden ticket to the world of show business and took his first one-man show, in which he told viewers about his difficult life in a funny manner.

In 2000, Russell became a video journalist on MTV. He hosted several entertainment programs and was dismissed because he came to work dressed as Osama bin Laden on September 12, 2001, and introduced his friend, a drug dealer, to the guest star, Kylie Minogue.

After leaving MTV, Russell became the author of a comedy show, making fun of cultural taboos. In 2004, Brand was a TV host for Big Brother’s Eforum, which featured stars such as Tom Cruise, Uma Thurman, Boy George, and Milla Jovovich, and two years later the actor presented the NME Awards.

In 2008, Russell hosted the MTV Video Music Awards, where he also caused a scandal, saying that the night "marked the launch of a very new Britney Spears era," comparing the singer with Jesus Christ. Besides, talented Brand has worked on the radio, written books, and recorded songs. The eccentric man even performed with Robbie Williams and recorded several soundtracks for films.

Among other things, Russell Brand has proved himself to be an outstanding actor. Initially, the eccentric stand-up comedian appeared in sitcoms, which were followed by more serious roles. So in 2006, he played a bit part in the modern fairy tale Penelope, which told about the enchanted woman from a wealthy family. Christina Ricci, Catherine O'Hara, James McAvoy, Reese Witherspoon, Peter Dinklage and other stars of show business performed the leading roles.

A year later, Russell Brand showed film critics and fans that he was a professional actor, playing the metrosexual and rock musician, Aldous Snow, in the film Forgetting Sarah Marshall (2008). Russell was lucky to work on the same set with such movie stars as Kristen Bell, Mila Kunis, William Baldwin, etc.

Movie lovers liked the character of Aldous Snow so much that the hero appeared again in the 2010 comedy Get Him to the Greek. In the film, Aaron Green (Jonah Hill), a talent scout at the music corporation, must take the famous rock singer to a concert.

Russell Brand also participated in the movies Bedtime Stories (2008) with Adam Sandler, The Tempest (the 2010 film adaptation of the play by William Shakespeare), the TV series Big Time Rush, and other notable works.

Since Russell Brand is a public and eccentric figure, his personal life is not a secret book. The celebrity lives in the USA with his pets: a cat and a shepherd dog. Despite his controversial nature, Russell is an animal rights activists and a vegetarian (he stopped eating meat products at the age of 14).

Among other things, Brand suffers from bipolar disorder. But the alcohol and drug addict with hypersexuality disorder (Russell said that he had sex with 2000 women) mended his way. Since 2002, the actor has been trying to lead a healthy lifestyle, so there is no alcohol, cigarettes, and other prohibited drugs in his house. Religion helped Russell to choose the right path, and he began to practice Hinduism and yoga.

It is also known that the actor was married to singer Katy Perry. The lovers met in 2008, and in 2010 they got married. However, in 2011, Brand filed for divorce, citing irreconcilable differences.

In 2016, Russell made a marriage proposal to Laura Gallacher and became a father for the first time. Brand has an Instagram account, and fans can enjoy photos of his family life.

In 2016, Russell Brand took part in the voicing of the animated film Trolls and played the leading role in the movie Army of One, alongside Nicolas Cage.

Russell Brand has an estimated net worth of $15 million.