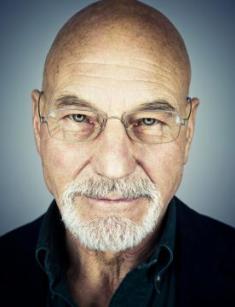 Sir Patrick Stewart is a British actor who earned much fame thanks to the roles of Captain Jean-Luc Picard in the series Star Trek: The Next Generation and Professor Charles Xavier in the movie series X-Men. Besides, the artist is one of the leading performers in the Royal Shakespeare Company.

Patrick was born in Yorkshire into the family of a tailor Gladys Barrowclough and a British officer Alfred Stewart. The boy had two elder brothers, Geoffrey and Trevor; their age difference was pretty big.

The family was poor; the stuffy atmosphere was intensified by the father’s posttraumatic stress disorder: he had seen war and used violence against his wife and kids.

The eleven-year-old boy attended a middle school where a teacher of English organized a drama club. The children’s theater and frequent performances became a piece of comfort for Stewart. For years later, he quitted the school and got hired at a newspaper to write notes and obituaries. However, it was only an external excuse to spend more time on acting – the young man told everyone he was collecting new materials while he would go to rehearsals. He was fired the next year.

Perhaps, none of the English theater lovers will judge talented 16-year-old Patrick for his choice – playing Shakespeare’s characters rather than writing short notes about deceased people. Little by little, the artist’s skills were mastered, and he became one of the leaders in the Royal Shakespeare Company. Patrick Stewart was awarded The Order of the British Empire for his artistic achievements; Queen Elizabeth II knighted him in 2010.

Patrick debuted in cinematography in the mid-1960: it was the series Coronation Street. Overall, his filmography includes more than 150 projects, most of which are series; the actor’s productivity and diligence are more than impressive.

In the mid-1970s, the actor played the historical figure, the military leader Sejanus, in the BBC’s mini-series about the Roman Empire I, Claudius.

The first recognition came in 1984 when the sci-fi movie Dune by David Lynch was presented. The project also starred Kyle MacLachlan, Sting, Dean Stockwell, and Sean Young. The historical movie Lady Jane with young Helena Bonham Carter was another notable movie of that period.

The sequel of the legendary series Star Trek: The Next Generation made the actor immensely popular; he was named the best TV performer of the decade in 1993. The same year, Stewart appeared as the main character in the action Death Train and the comedy Robin Hood: Men in Tights.

Patrick said good-bye to the role of Jean-Luc Picard in 2002: he played him in Star Trek: Nemesis. However, another iconic figure replaced the captain: Professor Charles Xavier in the screen adaptation of the X-Men comics.

The actor does not hesitate to experiment with genres: actions (Gunmen), family movies (The Pagemaster), comedies (Jeffrey), and detectives (Conspiracy Theory). People remember him in the thriller Masterminds, the historical tragedy The Lion in Winter, the fantastic crime series Eleventh Hour, and TV fairy tale A Christmas Carol.

The new decade is marked with the part of Duke John of Gaunt in the drama Richard II and Darcy in Green Room, as well as the American sitcom Blunt Talk.

Some projects are funny: for instance, Patrick voiced a sheep in the comedy A Million Ways to Die in the West. In 2017, The Emoji Movie was premiered; one of the characters, Poop, could boast having the voice of the leading actor of the Royal Shakespeare Company.

The family pressing had much influence on the actor: he started losing his hair at the age of 18. As a result, the young man had many complexes and hardly made acquaintance with women; he used to think he would be luckier with hair.

In 1965, Stewart married the choreographer Sheila Falconer; they spent 25 years together and had two children: the son Daniel and the daughter Sophie. By the way, the son followed in his father’s footsteps and collaborated with him in Death Train and Star Trek: The Next Generation.

In 1994, the man began to date the producer Wendy Neuss, whom he had met at a collaboration TV project. The relationship development was not fast: they announced the engagement in 1997 and married three years later to divorce in 2003. Rumors had it the long-term romance of Stewart and the actress Lisa Dillon caused the break-up.

In 2008, Patrick met the American singer and songwriter Sunny Ozell at Macbeth staged in the Brooklyn Academy of Music. The celebrities were seeing each other for five years and married officially in September 2013. The fiancé’s best friend, the actor Ian McKellen, was a master of the ceremony. Today, the spouses happily live in their own house in Brooklyn.

In 2017, Patrick Stewart excited many people by photos and videos on Instagram, Facebook, and Twitter: one could see the actor with an adult pit bull Ginger. The spouses had an in-home boarding but got attached to the dog. Many thousands of people viewed these cute videos and expressed their hopes that the artist would keep Ginger.

Although the artist has been diagnosed with rheumatoid arthritis, he continues to work on various projects today. In 2017, he participated in the tenth movie of the X-Men franchise, Logan, and collaborated with Hugh Jackman. As the story runs, Professor Xavier dies during the battle against Wolverine’s clone, X-24.

In 2018, Stewart worked on the fantasy movie The Kid Who Would Be King premiered the next year. One can see a boy who finds a magic sword: it can help interfere with Morgana’s (Rebecca Ferguson) plans to conquer the world. The artist personified old Merlin.