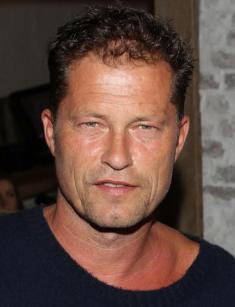 Til Schweiger is a German actor, scriptwriter, director, and producer. He became famous for the lead role in Knockin' On Heaven's Door; overall, the artist has appeared in dozens of projects. Today, he is actively involved in directing and producing; the remake of the 2014 movie Honey in the Head is one of his recent works.

Tilman Valentin Schweiger was born on December 19, 1963, into a family of teachers. He grew up in Freiburg; the boy’s childhood was similar to that of other kids: school, home, tricks.

The student did not have to take great pains: studying was easy for him; German and Literature were the would-be actor’s favorite subjects. Til did not consider an acting career: he was going to devote himself to teaching, just like his parents.

After graduation, the young man enrolled at the university to study German philology; he quitted two years later. The reason was trivial: German teachers were far from being privileged and had to survive on poor wages, let alone the lack of prospects. A medical career looked much better, and Schweiger successfully graduated from a college. Soon, the young man joined the German Air Force in Holland. When Til returned, he could not find his place in society for a long time.

The actor debuted in some episodes of the series Lindenstraße. 1991 brought the first significant role in the comedy Manta, Manta. In 1993, the handsome, masculine-looking artist received the Max-Ophüls-Preis Best Actor Newcomer Award.

In 1994, Til was invited to the comedy Der Bewegte Mann (Maybe, Maybe Not); the premiere made him a star. 1997 was incredibly successful: Knockin' On Heaven's Door proved to be a great hit. Critics recognized that Til was not only a comedy artist but also a drama talent. The man co-created the script and produced the movie; it was a triple triumph. Schweiger won the 20th Moscow International Film Festival - Best Actor.

The role in Bastard (1997) brought Polish Film Festival (Polish Oscar) Best Actor. The next few years were marked with many invitations and shootings.

Steven Spielberg invited the actor to Saving Private Ryan, but Schweiger refused; he preferred The Replacement Killers (1998). While the artist played main characters in Germany, Hollywood offered him secondary parts: Magicians, Driven, Investigating Sex, Lara Croft: Tomb Raider – The Cradle of Life. Only 2004 brought the lead role in the American war thriller In Enemy Hands. The same year, Schweiger appeared in Les Dalton made in France, Germany, and Spain.

In 2006, Til participated in German projects: One Way and Where Is Fred? In 2007, he gained the lead role in the action about bodyguards, Body Armor. At the same time, the man personified the main character in the American crime thriller Already Dead.

In 2009, Schweiger appeared in the iconic war drama Inglourious Basterds by Quentin Tarantino. Brad Pitt and Mélanie Laurent played the main characters. The same year, the premiere of the drama Phantom Pain took place; Til had the role of a bicyclist who lost a leg in a car crash.

Til did not limit himself with acting: he wanted to exploit his talent to the fullest and tried himself as a director and scriptwriter. He debuted in the action movie Der Eisbär (The Polar Bear) where he also personified the main character. Later, the actor played protagonists in the majority of his projects.

Soon, the comedy action Auf Herz und Nieren (With Heart and Kidneys) was released; unlike other movies directed by Til, he did not act there. The romantic movie Barfuss (Barefoot) and severely criticized 1½ Knights - In Search of the Ravishing Princess Herzelinde followed.

In 2007, the movie Rabbit Without Ears was released; Til played the main character, directed it, and wrote the script. The actor’s younger daughter, Emma, collaborated with her father. The sequel came out two years later; in 2011, a similar comedy, Kokowääh, was presented.

In 2012, the artist took a break in light comedies and presented the thriller Schutzengel (Guardians); as usual, he worked on it as a director, scriptwriter, and lead actor. The next year brought the sequel of Kokowääh. In 2014, the tragicomedy Head Full of Honey became the lead movie in Germany.

In 2016, the artist personified the main character in the German comedy action Nick Off Duty. As the story runs, the daughter of the police officer (Til Schweiger) goes to revenge her mother’s death; Luna Schweiger played the girl.

Apart from cinematography, Schweiger is a successful hotel business owner. In 2016, the actor opened the hotel Barefoot in honor of his movie in Timmendorfer Strand, a coastal town on the Baltic Sea.

The actor met his would-be wife, the American model and actress Dana Carlsen, in 1995; the couple married the same year. The spouses spent ten happy years together. Four children were born in the family: Valentin, Luna, Lilli, and Emma.

In 2005, Dana and Til split up; the actor moved from the family mansion to a separate apartment.

The next four years, the wife and the husband lived separately but did not divorce until 2009. They remain on friendly terms; Til is in touch with his children and supports his ex.

Women love Til Schweiger. After the divorce, the man had romances with the models Melanie Scholz and Svenja Holtmann; the chain of short-term affairs followed. Schweiger did not end up with a new partner: according to the actor, he likes to be free and enjoy free relationships.

The artist likes Russia; he participated in local TV shows and made his movies there. In 2011, Schweiger appeared in the comedy show Prozhektorperiskhilton; in 2013, he played in a sketch about a passport office in Comedy Club.

In fall 2015, Til began to work on a new movie in Moscow. He found some time for interviews and talked about the project in Evening Urgant.

The same year, the man started dating Marlene Shirley. The couple visited social events together, and the actor emphasized he was committed to that relationship. Journalists marked that the woman bore some resemblance to Til’s ex-wife.

However, the new couple broke up. Three years later, Schweiger had a new lover, his old acquaintance Francesca Dutton. The actress and producer was 23 years younger than Til and participated in Wellchild charity events. The woman supported him in everything and often posted photos of her partner’s new movies.

Once again, the relationship did not last long. Dutton works in the USA and Great Britain while Schweiger spends much time in Germany. The couple did not keep their feelings at a distance; they split up in 2019, and the celebrity is single now.

2018 brought more new projects for the actor. In the German crime comedy Hot Dog, the artist played a rebellious police officer who had to comply with his young colleague’s formal attitude. At some point, they have to rescue the daughter of an Eastern-European president kidnapped in Germany. Til directed and played the main character in Klassentreffen (Class Reunion).

Besides, the German artist is going to appear in the Russian movie Crime and Punishment by Roman Doronin. The project is being produced now.