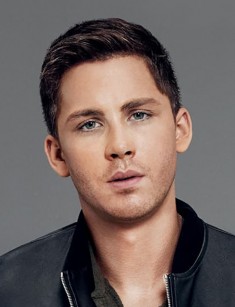 Few people know that the leading actor in the film Percy Jackson & the Olympians: The Lightning Thief, Logan Lerman, is a talented musician and successful businessman. At the age of 25, the actor has a comprehensive filmography, and he is an excellent example for those who are just starting their path to the cinema stardom.

Logan was born on January 19, 1992, to orthoptist Larry Lerman and his wife Lisa, a housewife. The family lived in the west of Los Angeles, in the city of Beverly Hills. Logan grew up with his older sister Lindsey and older brother Lucas. His family owned a prosthetics company. The father believed that the younger son would follow in his footsteps. He repeatedly took the beloved child to work, but he failed to instill a love for medicine in his son. Logan had a passion for cinema from early childhood and in the mid-90s began to shoot in commercials.

Logan is a creative person who has always been interested in the process of filmmaking. Lerman's favorite directors are Paul Thomas Anderson, Stanley Kubrick, David Fincher, and Peter Bogdanovich. He likes the films American Beauty (1999), Defending Your Life (1991) and Eternal Sunshine of the Spotless Mind (2004) among the great variety of movies. In 2010, Logan graduated from Beverly Hills High School, where Angelina Jolie and Nicolas Cage had studied before, and then he applied to study creative writing at New York University.

Lerman made his movie debut in 2000 when Roland Emmerich’s film The Patriot was released. Then Logan was lucky to work on the same set with real Hollywood stars: Heath Ledger, Mel Gibson, and Jason Isaacs. The same year, the filmography of the talented novice actor included the role in the fantasy comedy What Women Want. Logan played young Nick Marshall in the film about an advertising executive whose life has changed dramatically.

In 2001, Lerman played the title characters in the movie Riding in Cars with Boys (the role of eight-year-old Jason) and The Butterfly Effect (the role of seven-year-old Evan). Adam Garcia and Ashton Kutcher portrayed the adult versions of the characters. At the age of 10, the young talented actor decided to take a short break, but when he was 12 years old, he consciously chose an acting profession and began to improve his skills.

13-year-old Lerman won the Young Artist Award for the title role in the series Jack & Bobby (2004). Nine years later, the man received the same award at the Cannes Film Festival. The western 3:10 to Yuma, in which young Logan played together with Christian Bale and Russell Crowe, was nominated for two Academy Awards and the Screen Actors Guild Award (for Best Cast).

The comedy Hoot (in which the actor worked with the Golden Globe winner, young singer Brie Larson), the thriller The Number 23 with Jim Carrey, the melodrama My One and Only with Renée Zellweger and action film Gamer with Gerard Butler are the most prominent films of Logan Lerman’s early career.

In 2010, the fantasy film Percy Jackson & the Olympians: The Lightning Thief directed by outstanding director Chris Columbus was released. Logan got the title role in the movie. His character suddenly finds out that he is the son of the god Poseidon and has a special mission. The sequel Percy Jackson: Sea of Monsters was released three years later and also became popular with young viewers.

One more version of the novel "The Three Musketeers" (2011) by Alexandre Dumas was a real anthem of steampunk. Milla Jovovich played Milady, and Logan was honored to become new D'Artagnan. However, viewers did not receive the film enthusiastically. Its budget was $ 75 million, and the movie grossed 136 million at the box office. In 2012, Logan starred in the independent comedy film Stuck in Love, in which well-known Lily Collins and Jennifer Connelly became his partners.

The same year, the war drama Fury was released. Logan played Private Norman Ellison, nicknamed Machine, in the film about the events that preceded the fall of the Third Reich. In January 2016, viewers could see Logan in the film Indignation, directed by James Schamus. Lerman's character is a Jewish student who faces anti-Semitism and sexual repression while studying at Ohio College in the 1950s.

The 25-year-old actor has always tried to hide his personal life. There is almost no information on the Internet about Logan’s relationship with women. It is only known that Lerman dated actress Alexandra Daddario for a couple of years. The young people met in July 2009 on the set of the film Percy Jackson & the Olympians: The Lightning Thief. The couple even got engaged, but they did celebrate the wedding. The reason for the breakup was not covered by any print media in Europe.

Then there was no information about the love affairs of the actor in the press. In 2012, people, who waited for the details of the famous artist’s life, started a rumor that Logan was gay. The reason was a scene in the film The Perks of Being a Wallflower in which Lerman had to kiss Ezra Miller. The actor has repeatedly refuted the information about his sexual orientation. Lerman said in numerous interviews that he was never a homosexual.

It is worth mentioning that fans, colleagues on the set, and even representatives of show business have gone crazy for the blue-eyed dark-haired man with a charming smile. In 2012, Justin Bieber's ex-girlfriend, Selena Gomez, publicly expressed her sympathy to Logan.

The actor said in the program Access Hollywood that he was indeed pleased to hear Selena’s words, but their relationship was out of the question. After such a polite but negative response, fans concluded that their favorite actor already had a girlfriend, but he did not want to reveal her name.

In January 2017, the American drama The Vanishing of Sidney Hall, directed by Shawn Christensen, was released. Lerman got a leading role in the movie, telling about the life of a young writer. In April 2018, the animated film Sgt. Stubby: An American Hero will be released. It is known that the distinguished actor will give his voice to soldier Robert Conroy, who worked with Sergeant Stubby during the First World War.

Despite the busy schedule, the actor who is 175 cm tall does not forget about the fans. On Instagram, Logan regularly posts photos of filming and video cutting of his rest. It is worth mentioning that social networks are not the only source of the latest news about the actor’s life. The content related to the artist’s acting career is also often published on various Internet portals and in print media.