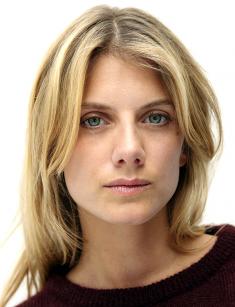 Mélanie Laurent was born in Paris in February 1983. The family was Jewish. Both parents had something to do with art: the mother was a former ballet dancer and ballet teacher; the father was a voice actor who played Ned Flanders in the French version of the animated series The Simpsons.

Laurent’s grandfather from the paternal line was one of the deportees during World War II. The ancestors from the maternal line created movie posters. Mélanie has some Sephardic and Ashkenazi.

The girl spent her childhood in the ninth arrondissement of Paris, the right bank of the Seine. It was only natural for her to “breathe” art: this area was famous for many legendary objects, such as Olympia Hall, Musée Grévin in Montmartre, Palais Garnier, and the Notre-Dame Cathedral. Laurent dreamed of acting since early childhood; she took the first steps in cinematography as a teenager.

16-year-old Mélanie and her friend went to the studio where the adventure comedy Asterix & Obelix Take On Caesar was filmed; the friend’s father participated there. This is where Gérard Depardieu noticed the young French and marked her artistic potential. The actor gave Mélanie the phone number of his assistant and a valuable recommendation: not to spoil her natural talent by learning how to act.

Mélanie did not wait for the second chance and appeared in Depardieu’s melodrama Un Pont Entre Deux Rives (The Bridge) in 1999. Gérard Depardieu and Carole Bouquet played the main characters, but the young star Laurent shone brightly as well, even though her role was secondary.

After the movie was released, the actress was showered with new offers. Soon, the movies Ceci Est Mon Corps (This is My Body), Summer Things, Snowboarder, and The Beat That My Heart Skipped were presented. In 2008, the comedy melodrama Paris by Cédric Klapisch came out; the actress co-starred with her French colleagues Juliette Binoche and Romain Duris.

By that moment, the young artist had already won the César Award and the Prix Romy Schneider for the drama Don't Worry, I'm Fine. The director Philippe Lioret gave her the lead role without auditions and pilot filming: he was impressed by the actress’s previous works.

In 2009, Quentin Tarantino himself invited the talented French to his new drama Inglorious Basterds in the genre of alternative history. Brad Pitt, Til Schweiger, Eli Roth also appeared in the movie. The role of the young Jewish woman made Mélanie famous all over the world; she was nominated for Empire Award for Best Actress and won Screen Actors Guild Award.

In 2013, the audience enjoyed the actress’s work in the detective thriller Now You See Me by Louis Leterrier, the Hollywood director from France. Laurent got the role of an Interpol agent; Mark Ruffalo personified an FBI agent.

The same year, the woman took part in the movies Night Train to Lisbon and Enemy. The latter project was the psychological thriller by the French-Canadian director Denis Villeneuve. Mélanie had the chance to co-star with Jake Gyllenhaal, Sarah Gadon, and Isabella Rossellini.

In 2014, Laurent received a role in the drama Aloft that was nominated for Golden Bear at the Berlin International Film Festival. Simultaneously, the ratings of the movie on Rotten Tomatoes was only 16%. Jennifer Connelly, Cillian Murphy, and Oona Chaplin worked on the movie as well.

The melodrama By the Sea was one of the actress’s brightest projects. Angelina Jolie and Brad Pitt personified the main characters; Jolie was also the scriptwriter and director. As the story runs, the spouses leave noisy New York for the French Riviera to save their marriage. However, they have to face the challenge as they encounter a hot French couple (Mélanie Laurent and Melvil Poupaud). The drama was filmed in Malta.

In 2016, the celebrity participated in the romantic drama Éternité with Audrey Tautou. The story is based on the novel by the French writer Alice Ferney.

Mélanie Laurent tried herself as a director and created the melodramas The Adopted and Breathe and short movies X Femmes and De Moins en Moins. The latter was nominated for 2008 Cannes Film Festival - Short Film Palme d'Or.

There is little information about the actress’s personal life: she keeps her family away from journalists and does not visit social events with her husband.

There were many rumors about the woman’s romances; however, she did not make any comments. Mélanie allegedly dated her French colleague Julien Boisselier. Soon, the beauty was noticed with the Irish composer and singer Damien Rice; they recorded an album together.

The affair with Rice was probably made up by tabloids. In 2013, Mélanie appeared at the premiere of Now You See Me pregnant; soon, the son Léo was born. The artist does not reveal the father’s name; it is only known that the couple is in a common-law union.

Mélanie is left-handed. In 2011, she became the spokesperson for Dior Hypnotic Poison perfume that Monica Bellucci used to advertise.

In 2018, fans had the opportunity to see their favorite in the comedy melodrama Return of the Hero by Laurent Tirard. The project also starred Jean Dujardin who personified Captain Charles-Grégoire Neuville.

Mélanie played Elisabeth, the witty sister of the captain’s lover. Soon after Neuville comes back from the military operation, she is involved in an ambiguous situation: Elisabeth sent letters to her sister to comfort her when Pauline’s fiancé was away. The movie was premiered in France on St. Valentine’s day.