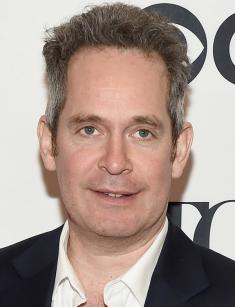 Thomas Hollander in his youthA vibrant British actor Tom Hollander first became known through his work in the theater. He entered the film and television industry at the beginning of the 90s and became a brilliant supporting actor first in his homeland, and then in Hollywood as well, starring in many high-budget projects, such as The Pirates of the Caribbean. Tom Hollander has been nominated for prestigious awards several times. In 2017, this Britt received the BAFTA award for Best Supporting Actor.

Thomas Anthony Hollander was born on 25 August, 1967, in Bristol in a family of intellectuals. The actor's parents, Anthony Hollander and Clare E. Hill are teachers. His mother is British, and his father has Jewish ancestry. The couple raised two children: the actor has an older sister, Julia Hollander.

The boy was brought up in Oxford. His first school was Dragon School where he got acquainted with the craft of acting. The boy's mentor, Andrew Roberts, entrusted him with a part in the "Oliver" production.

Then Thomas continued his education at Abingdon School. Here young Hollander became a chief chorister and later a member of the National Youth Theater and the National Youth Music Theater (then known as the Children's Music Theater). In 1981, at the age of fourteen, Tom was approved for the leading role in the BBC television series John Diamond.

After school, Thomas studied at Selwyn College, Cambridge, where he continued to develop his creative skills: he was a member of Cambridge University Footlights Dramatic Club and was the president of the Marlowe Society (a theatrical club run by Cambridge students). Sam Mendes, a famous British director, was Tom's friend and classmate, who staged several plays with the participation of Hollander, including the production of "Cyrano de Bergerac," where Thomas performed the leading part.

After graduating from college, the guy hoped he would get in a theatrical studio, but he could not do it because of several circumstances. This, however, did not have any impact on the actor's career.

Tom began his creative biography with dramatic roles. In 1992, the actor was awarded the Ian Charleson Award for his performance as Witwoud in The Way of the World. Two years later, he appeared in the character of Macheath in the musical staged by Bertolt Brecht, The Threepenny Opera (Die Dreigroschenoper). In 1996, Tom brilliantly performed the central roles in the good old classics - Molière's Tartuffe and Nikolai Gogol's The Government Inspector.

At the same time, the actor's film career started. His debut on the big screen was a small role in the political drama Some Mother's Son (1996), dedicated to the events in Northern Ireland. After some minor parts, Hollander appeared in a supporting role in the romantic comedy Martha, Meet Frank, Daniel and Laurence (1998). Continuing to work in this genre, the actor played in the film Bedrooms and Hallways (1998), where he got the role of a gay man, Darren.

While acting in films, Hollander did not leave the theater, and the year 1998 was the year of his debut on Broadway stage with "The Judas Kiss" by David Hare. The following year brought Tom the role in historical television drama series Wives and Daughters and the movie The Clandestine Marriage.

2001 was a very eventful year for the actor - four projects with his participation came out at once. Among them was an espionage thriller film Enigma, in which Hollander played the head of the team of British decoders, as well as a murder mystery film directed by Robert Altman Gosford Park.

Tom's character, Lt. Commander Anthony Meredith is a bankrupt entrepreneur, who finds himself among the guests of the wealthy aristocrat Sir William McCordle at his country estate, Gosford Park. After the mysterious murder of the owner of the house, Meredith becomes one of the suspects. This work brought Hollander international fame, as it was awarded many prestigious film prizes, including the Academy Award for the Best Original Screenplay.

For his first award - British Independent Film Award for Best Supporting Actor Tom Hollander was nominated in 2004 for masterfully portraying the character of the playwright Sir George Etherege in the historical drama film The Libertine starring Johnny Depp.

The following year brought the actor recognition once again - The London Film Critics' Circle Award for British Supporting Actor of the Year for the part of Mr. Collins in the film adaptation of Jane Austen's novel, Pride & Prejudice. The film was also nominated for an Oscar and received a prestigious BAFTA Award.

In 2006, the actor played in the film A Good Year directed by the master of British film making, Ridley Scott. Tom's character, Charlie Willis is the best friend of the main character, Max Skinner, who was played by the actor Russell Crowe.

In the same year, Tom received an offer from Hollywood to participate in the shooting of the epic fantasy swashbuckler film Pirates of the Caribbean: Dead Man's Chest. Hollander appeared in this and subsequent parts of the movie (Pirates of the Caribbean: At World's End (2007)), performing a cameo role of Cutler Beckett, which nonetheless tuned out to be very memorable.

A new Hollywood project in the filmography of the actor was a historical thriller film Valkyrie (2008), in which Thomas played the role of a German Colonel Heinz Brandt.

Whether by his own choice or by the directors' will, Hollander, despite being 5 feet 41 inches tall, tends to perform the roles of statesmen.

For example, in the television series The Lost Prince (2003) he played the character of George V, in the TV series John Adams he got into the character of King George III. Then, in the comedy series The Thick of It (2009) he got the part of Cal Richards, the Chief Election Strategist, and in the Mission: Impossible – Rogue Nation (2015) he even played the Prime Minister of England.

In 2016-2017 Thomas actively worked on many British television projects. In the project The Night Manager, which is devoted to the opposition of the British and American intelligence, the actor worked together with Hugh Laurie and Tom Hiddleston, he played Major Lance "Corky" Corkoran, an arms dealer assistant. For this part, the man received a BAFTA Award for Best Supporting Actor.

In 2017, the television series Taboo, which describes the events of the early XIX century, came out: a young adventurer, James Keziah Delaney (Tom Hardy) comes back from Africa with mined diamonds and builds his trading Empire. Hollander got the supporting part of the chemist and scientist Dr. George Cholmondeley.

Among the actor's recent works is a role in the biographical film about the outstanding musician Freddie Mercury, Bohemian Rhapsody, as well as a part in the post-apocalyptic horror thriller film, Bird Box.

Thomas Hollander doesn't like to talk about his personal life. It is known that the actor is not married and lives alone in his London house in Notting Hill. Besides, the actor doesn't have a social media account.

On Twitter and Instagram, one can only find fan accounts with various photos from the set. The actor actively engages in charity work and leads a healthy lifestyle.

Thomas Hollander has a net worth of $5 million.

In late 2018-early 2019, the film Holy Lands is going to be released, in which Thomas plays the leading role.

Besides, in the spring of 2018, the media reported that the actor was going to star as Quasimodo in a new TV film adaptation of Victor Hugo's novel, The Hunchback Of Notre-Dame. The project's release date has not been set yet. Some sources assume that it is this role that at the moment Tom might be busy preparing for.

Recently, on his IMDb profile, there appeared a review on his latest work on the television series Baptiste, the first season of which just came out in February, 2019. In this spin-off series from the drama The Missing using one of the central characters, Julien Baptiste, played by Tchéky Karyo, the British actor got the part of Edward Stratton.