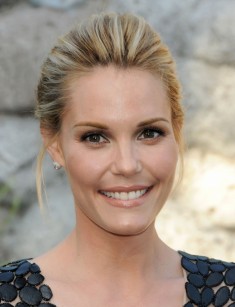 Leslie Bibb is an American actress, who is known for the roles in the famous films Iron Man, Iron Man 2, Law Abiding Citizen, The Midnight Meat Train and others. Before she became famous as an actress, Bibb had walked the runway and developed her modeling career.

Leslie Louise Bibb is from Bismarck, North Dakota, USA. She was born on November 17, 1973, in a large family (Leslie has two sisters). The father of the future actress died when she was three years old.

In 1990, Leslie Bibb won the Elite Model Management beauty contest at the Oprah Winfrey Show. The girl was 16 years old, and before starting a modeling career, she graduated with honors from the school.

Bibb signed a contract with the Elite Model Management. At the same time (1991) she applied to the University of Virginia. However, after the end of the first semester, the model moved to build a career in New York. Her photos appeared on the pages of Maxim and FHM (online edition, closed in 2015).

Viewers could appreciate Leslie Bibb's acting abilities in the series Home Improvement and Just Shoot Me!, but the young model appeared only in episodes. In 1997, the well-known comedy series Private Parts with Bibb was released. In the beginning, Leslie often had to play bit parts.

The actress got the first prominent role in the series The Big Easy, which was closed after the first season due to low ratings.

In 1999, Leslie Bibb portrayed the image of Brooke McQueen in the series Popular. Creators Ryan Murphy and Gina Matthews managed to attract the attention of thousands of American teenagers. Directors began to offer Bibb roles after her appearance in Popular.

In 2000 she appeared in the thriller The Skulls together with well-known actors Paul Walker and Joshua Jackson. One year later, the comedy See Spot Run with Leslie Bibb in the leading role was released.

The shooting of Popular was completed in 2002, and she began filming in a new project ER. The American medical drama television series tells about the life in the County General Hospital of Chicago. For 15 years of broadcasting, the series was nominated for the Emmy Award 124 times.

In 2005 the filmography of the actress included one more popular series Crossing Jordan. Leslie played Detective Tallulah Simmons. The last season was released in 2007, and Bibb began to appear in films more often.

In Iron Man, the actress starred with Robert Downey Jr., Gwyneth Paltrow, Terrence Howard. Her career flourished, and she became more and more popular. Leslie Bibb’s talent was highly appreciated not only by fans. In 2010, she won the Best Actress Award at Boston Film Festival for her role in Miss Nobody.

In 2012, the actress got a role in the series GCB. The plot tells about the life of Amanda Vaughn (Leslie Bibb). But after the 10th series, the project was closed.

In 2013 American playwright Neil LaBute offered Leslie a role in the play Reasons to be Happy. The premiere took place in New York. Since 2016, the actress has played one of the characters in the sitcom American Housewife.

Beautiful Bibb is an in-demand Hollywood star. Thanks to her talent and bright appearance, the actress annually takes part in several projects. Some online sources believe that the ideal facial features are the result of plastic surgery.

Besides the annual filming, Leslie Bibb participates in other projects. She devotes much time to charity. The actress is a member of a nonprofit organization that raises money for Casa Hogar Sion, an orphanage in Mexico.

In 2003, Leslie Bibb married banker Rob Born, but a year later the marriage broke up. The couple did not have children. In 2007, it became known that Bibb had the romantic relationship with the actor Sam Rockwell. For the first time, the young people met on the set of the film Iron Man 2.

The couple lives together, but they do not hurry to marry. Rockwell has said in an interview that marriage and children are a heavy burden.

In early June 2018, the film Tag premiered in the USA. Leslie Bibb appeared on the red carpet with her lover Sam Rockwell. There was the whole cast of the film including Jeremy Renner, Annabelle Wallis, Ed Helms, Jon Hamm, Isla Fisher. The project premiered on June 28 in Russia. The photos of the American presentation are freely available on the Internet.

The storyline of the comedy tells about five friends, who each year become rivals in the unusual version of the game Tag. Each player is willing to risk everything that he has in order not to lose. 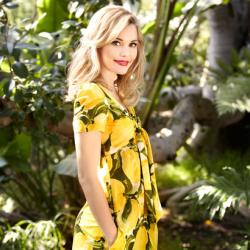