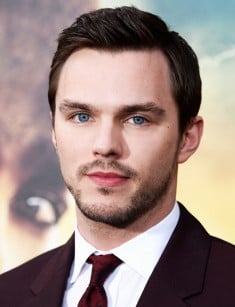 Nicholas Hoult is a young British, and later - а Hollywood actor. Hoult has become popular due to his role of the boy Marcus in the family melodrama About a Boy with Hugh Grant. Then he performed the role of Tony in the teenage drama Skins of E4 TV channel. But Nicholas Hoult had gained real popularity when he played the character of

Henry "Hank" McCoy / Beast, the through character in the series of the comic blockbusters X-Men. One more significant role of Hoult became his image of the post-apocalyptic fanatic soldier Nux in the adventure fighter Mad Max: Fury Road.

Nicholas Hoult was born in the small town of Wokingham located in the English County of Berkshire. His mother Glenis Brown worked as a music teacher and educated children in mastering the piano. His father Roger Hoult was a professional pilot of the planes belonging to the British Airlines. Except for Nicholas, there were three more children in their family – the seniors Clarista and James and a younger sister Rosanna. Nicholas also had a famous relative. His cousin grandmother Florence Marjorie Robertson, more known to the public under the pseudonym Dame Anna Neagle – a famous English actress and singer.

Together with his sisters, the boy attended the dancing classes at the ballet school and even took part in the performances Swan Lake and The Nutcracker.

Nicholas attended the Ranelagh school which is considered to be the oldest one in England. But he has studied here only till the age of twelve. After this, he left his studies for his career which began to take off.

The actor began his creative career of the actor since early childhood. For the first time, Nicholas Hoult appeared on the big screen at the age of seven. He debuted in the tragicomedy Intimate Relations. Then he has focused on the shootings in TV movies and series for some time.

During the period from 1996 till 2002, the small actor took part in the episodic roles in the comedy Mr. White Goes to Westminster, medical series Casualty and Doctors, detective series Silent Witness, Judge John Deed, The Ruth Rendell Mysteries, and The Bill. Moreover, he played the roles in the thriller Waking the Dead, the drama series Holby City, a comedy sitcom World of Pub, crime series Murder in Mind and a historical TV series Magic Grandad.

Nicholas became famous in 2002 when he played the leading role in the duet with Hugh Grant in the melodrama About a Boy. For this role, he received the award of Phoenix Society of Film Critics and also was nominated for the following prizes - Young Actor and Critics’ Choice.

After this success followed the secondary roles in the drama Wah-Wah, the melodrama The Weather Man, the teenage drama Kidulthood, the family series Mysterious Hunters, the tragicomedy Keen Eddie, the crime thriller Wallander and others. At the same time, he took part in the drama Coming Down the Mountain where he embodied the image of the teenager who had to live together with his brother who was born with Down’s syndrome and also in the teenage drama series Skins.

Being an adult, Nicholas Hoult took part in the parody series Robot Chicken and also participated in the fantasy - fighter Clash of the Titans as Eusebios. For his work in the drama A Single Man, he was nominated for the award of The British Academy of Film and Television Arts.

For the role of Henry "Hank" McCoy / Beast in the superheroic fighter X-Men: First Class and its sequel X-Men: Days of Future Past the actor was nominated for the prestigious Teen Choice and People's Choice Awards. For the role of zombie R in the fantastic comedy melodrama Warm Bodies, Nicholas Hoult got the prize of Teen Choice Awards in the category Breakthrough for the leading role and also was chosen as the Best Comedy Actor and Best Actor in the melodrama.

Moreover, the actor played the leading roles in the fantasy movie Jack the Giant Slayer, the fantastic film Young Ones, the fighter Collide, the fantastic drama Equals, and the thriller Kill Your Friends. Ed Skrein also took part in the latter movie. The fans called this actor the double of Nicholas Hoult. By the way, from some particular angles, it’s almost impossible to distinguish the actors. Though, the actors have significantly different height: Nicholas Hoult is 190 cm high, and Skrein is 5 cm taller.

In 2015 there came out the new movie featuring Nicholas Hoult. It was the thrilling detective story Dark Places.

In September 2015 Nicholas Hoult took part in the Australian post-apocalyptic fighter Mad Max: Fury Road which turned out to be the international blockbuster and the owner of many Technical Academy Awards. At the same time, the movie has become the sequel and the restart of the cult blockbuster of the nineties. Not only the belonging to the famous franchise has made the film the sensational premiere. The creators of the picture have shown and highlighted the problems of modern society sharply: ecological irresponsibility, social inequality, neo-patriarchy, and many other problems. In such a way they have aroused the rough disputes on the web.

Charlize Theron and Tom Hardy have played the leading roles in the picture. Nicholas Hoult has performed the role of Nux, the fanatic driver from the army of Immortan Joe. The film critics have disputes on the subject whether to rank Nux as the leading character of secondary personage. But Hoult's character has received the touching story and significant rapid development from the mad fanatic servant of the primary antagonist to the dreamer and the hero who sacrifices his life for his dear people. The audience has liked Nux, and he has become the object of the fans' creative work: from the drawings to fanfics and cosplay.

During 2009 Nicholas Hoult was in a relationship with the American actress and the singer Victoria Justice. Next year during the shootings of the blockbuster X-Men: First Class he got acquainted with the actress Jennifer Lawrence. They have had relations for three years. When they broke up, Nicholas began a short love affair with his partner on the picture Warm Bodies - Teresa Palmer. At the end of 2013 at Christmas party, Hoult reconciled with Jennifer Lawrence again. The couple has even announced the engagement, but in August of 2014, the young people finally finished their relations.

Later the actor had a short fling with the star of the vampire saga Twilight - Kristen Stewart. In the spring of 2015, Hoult began to have relations with the American actress Dianna Agron, who was three years older than Nicholas.

Being a child, Nicholas Hoult played basketball for the Reading Rockets junior team. After he had become the well-known actor, the direction of Rockets considered him to be the honorary representative of the basketball club.

In 2013 Nicholas Hoult was invited to take part in the commercials of Jaguar Cars automobile company. Director Tom Hooper shot the commercial in the style of "the British Villains," which was traditional for this brand. For the first time, the video was shown during the live broadcast of the Super FA Cup.

The actor leads his personal verified account on Instagram. Hoult posts funny backstages in which the actor with the ready make-up makes jokes during the breaks between the shootings. Moreover, he publishes his photos from his real life: meetings with the friends, shopping, beach relax. Nicholas has 293, 000 subscribers who are interested in his updates.

In 2016 the actor took part in the sequel to the fantastic fighter X-Men: Apocalypse in which he again played the role of Henry "Hank" McCoy / Beast. In the new movie, the leading characters will have not only to fight for the place in the sun and to prove their right for life to other people but also to struggle against the most ancient and strongest Apocalypse mutant who can put an end to everything alive.

In January of 2017, the spectators saw Hoult in the role of Martin in the melodrama Newness. The picture has been shown at Sundance Film Festival, but it hasn’t been released yet.

In April of the same year, Nicholas has transformed into the character of the soldier Matt Ocre in the military drama Sand Castle. The movie tells the story about the group of the soldiers who were sent to the Iranian village to restore the water supply. The local people consider the soldiers to be their enemies, and the Americans have to persuade the Iranians in their good intentions and to survive in such conditions.

On the 22nd of December, 2017 the historical and biographic movie The Current War was premiered at Toronto Film Festival. The movie will tell about the beginning of the electric epoch. The plot is focused on the opposition of two popular "electric titans" Thomas Edison and George Westinghouse who were dividing the new appearing technological market. The movie also shows the mysterious inventor Nikola Tesla who brought the idea of alternating current, which was just fantastic at that period. Nicholas Hoult has performed the role of Nikola Tesla. Benedict Cumberbatch appears in the part of Edison in this movie and, and Michael Shannon will play George Westinghouse.

Also in 2017, the actor has taken part in the biographic movie Rebel in the Rye in which he has played the role of Jerome Salinger. This movie is dedicated to the main novel of this writer. The film tells the story how Salinger became the eminent American writer and how his novel The Catcher in the Rye entered the lists of classics of the American literature. Moreover, in the film, it's shown the appearance of the leading character of the novel - Holden Caulfield who became the hero of the generation as well as the symbol of the teenage rebellion.

The release of the next fantastic fighter about the mutants Dark Phoenix is set for November 2018. In this sequel, Nicholas Hoult will appear in the traditional image of Beast. The picture will tell the story of the strongest mutant Jean Grey who has lost control of her supernatural abilities.

Besides, in 2018 the actor will take part in the biographic drama The Favourite. Hoult will appear in the image of Robert Harley.

Besides, Nicholas Hoult is working on the voicing of several animated pictures. The actor has voiced-over the characters of two animated series which are prepared to be released in the hire: Fiver in the mini-series Watership Down based on the same-name book written by Richard Adams and not yet announced character in the full-pledged movie under the title Once Upon a Time in the Kitchen. 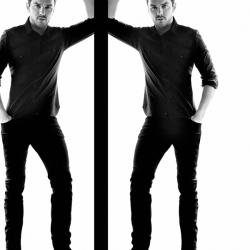