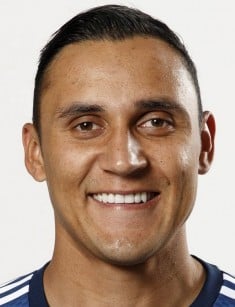 In the soccer world, Keylor Navas got the nickname “Iron Man” for his reliability and calmness, “Panther” for his fascinating saves, and “Holy Hands” for the pre-match praying. At the FIFA World Cup 2014 in Brazil, Navas led the national team to the quarterfinal; the became the best player of the game three times. Keylor Navas and César Navas from Rubin Kazan are namesakes.

Keylor Antonio Navas Gamboa was born in Costa Rica, Pérez Zeledón. The family loved in poverty. When the boy was small, his parents Sandra and Freddy went to America to earn money and left Keylor with his grandmother. However, the father had some time to instill love of sports in his son: the boy played soccer since five. On his Twitter page, Navas wrote that soccer was his entire life.

Navas went to Pedregosso soccer school for seven years. The young man could not get to the native town team due to his unfavorable characteristics: he was physically weak, and his height was unsatisfactory. Today, the sportsman’s height is 185 cm., and his weight is 78 kg.

It was the offer from the metropolitan club Deportivo Saprissa that helped Navas continue his soccer career. Still, the living conditions were so terrible that the young player was going to quit. At that time, he was invited in the youth team. Later, Navas became the six-time champion of Costa Rica with Saprissa.

The documentary movie “Hombre de Fe” (“The Man of Faith”) tells the story of the goalkeeper’s childhood challenges. To get the unique material from the player’s domestic arena Santiago Bernabéu, the directors had to obtain a special permission.

2010 was marked with the turning point in the Costa-Rican player’s career: the Segunda División club Albacete noticed him. In this club, Andrés Iniesta started his career. The goalkeeper coach and former national team player Luis Gabelo helped with the transfer. Navas played in the second division only for a season.

When the Clockwork Cheese left the Segunda División, Levante Unión Deportiva from Valencia loaned the player. The club had just joined the UEFA Europa League for the first time in its history. Impressed by the goalkeeper’s results, the club bought Navas for € 800 thousand. In this team, Keylor played for two seasons as the leading goalkeeper.

In 2013-2014 season, the sportsman broke the record on the number of saves in La Liga: thanks to the “Panther’s” 163 saves, the club got into the five teams with the least number of failures with saves.

In 2014-2015 season, the player joined Real. He participated in the FIFA Club World Cup at once and brought the victory. The transfer cost was € 10 million – the recording sum for Levante. The new club offered the goalkeeper € 2,2 million annually; in the next season, this sum was raised up to € 4,5 million.

The new member did not take the position of Iker Casillas at once. With Carlo Ancelotti, Keylor might have remain just a reserve player like the Mexican Guillermo Ochoa. In the end, Rafael Benítez got the last word, and Navas joined the first eleven.

In the Madrid team, Keylor won the Club World Cup two more times; he also got three victories in the UEFA Super Cup and Champions League. Navas was the first Costa Rican who gained the latter award.

In 2017, AS reported Milan could purchase “the little magician” because Gianluigi Donnarumma did not want to extend the contract. By the way, Navas’s transfer cost increased up to € 18 at that moment.

The English Arsenal entered the contest for the goalkeeper. Arsène Wenger viewed Keylor as Petr Čech’s successor – Čech’s condition left much to be desired at that period. However, Navas and the Spanish coach staff came to understanding so that the goalkeeper played the next season for Real.

As Keylor said in his interview to the Spanish radio, his family was religious although he got engaged in the religion late, when he was 19. In Navas ‘s opinion, any faith should be respected, and every person has the right to decide how to live. The goalkeeper plays before every match. He attends church two times a week; he met his future wife there. According to goalkeeper, the Spanish media underestimate him in spite of his good results and commitment.

“When things don’t go well for me, it’s when the man with the blank page takes out his pen and starts writing.”

However, it is comforting for the player that his club and people around support him.

The player’s wife Andrea Salas is a beauty and former model. She finished her career when she married Navas. Andrea is not a public person, she has no Instagram page, and there are only a few pictures of hers on her husband’s page. Andreas has the daughter Daniela from the previous marriage; the couple also has the son Mateo. Salas and Navas are friends with the Real Madrid attacking midfielder James Rodríguez’s family.

Navas mentioned that his childhood inadequate diet made him a gourmet. Keylor loves the national cuisine, and he does not mind cooking.

The sportsman is engaged in charity work and participates in games where funds are raised to help people. Besides, Navas has his own charity fund governed by the former player Emilio Butragueño who is currently the head of Public relations for the organization. The fund finances 260 projects in 72 countries. Keylor’s teammate Toni Kroos has also found a similar fund in Germany.

In 2017, Keylor won La Liga. He had his head shaved to support children with cancer; he also devoted the victory to them.

The success of Real Madrid was questioned when the goalkeeper got an injury at the Costa Rican national team training. Keylor had to leave the tournament for two weeks. Besides, the goalkeeper broke a kind of anti-record which made coaches and viewers nervous: during the match with Real Betis, he scored the own goal – Real Madrid had not had such an accident for 42 years.

In May 2018, Keylor won his 100th victory in Real Madrid. According to the statistics, Navas played 141 games, and his performance rates were 71%.

In 2018, Read Madrid won the 13th UEFA Champions League Cup in its history. Navas was lucky to hold the trophy three times in a row – no goalkeeper of the league had ever done that. The Spanish team’s strongest opponents – Barcelona, Bavaria, Liverpool, and Milan – have only a half of these achievements. It is almost impossible to accomplish these results.

Keylor’s colleagues also had their records. The head coach Zinedine Zidane had nine prizes since he had been administrating the club; three of them were the consecutive victories in the Champions League. Cristiano Ronaldo became the five-time UEFA Champions League Cup winner.

The player devoted the victory to the club’s fans and marked that only those who work hard and never lose their faith become lucky. According to Navas, there were challenging moments during the season, but the team believed in its strength and thus earned the joy of being the Kings of Europe. Keylor would be happy to finished his career in such a club as the Vikings.

Sometimes, people suggest that David de Gea might replace the goalkeeper. Navas views it as the motivation to go on. After Zidane left Real, the rumors about Keylor’s transfer to Chelsea instead of Thibaut Courtois recommenced.

At the FIFA World Cup 2018, the Costa-Rican national team played in Samara. During the test matches, Navas considered the Russian team to be strong. The goalkeeper noticed that Artem Dzyuba would look good at La Liga games. 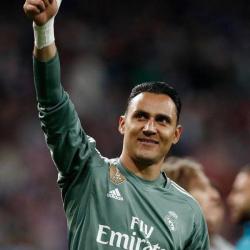