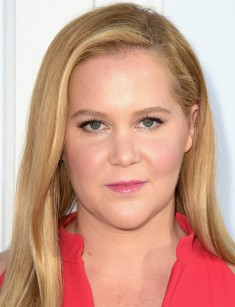 Amy Schumer can give people a good laugh. The talented stand-up comedian is famous for outrageous behavior and jokes. The woman is also a screenwriter, producer and the star of full-length comedies. Amy does not have low self-esteem. She supports the Body-Positive Movement and has become one of the celebrities who say that stout people do not mean that they are lonely.

Amy was born in a family with strong Jewish traditions. The father is Jewish, and her mother converted to Judaism before the marriage. Later, she recalled that she had to deal with antisemitism as a child.

The girl grew up in prestigious Manhattan. The father provided the family with the wealthy household. The man owned a flourishing furniture business. But at the age of 9, Amy Schumer was in need because the company failed, and the father fell seriously ill. Soon, the parents broke up, the girl with her mother moved to Long Island.

In her youth, Amy had a dream of becoming an actress. Therefore, after school, she went to Baltimore, where the young woman entered the university and began to study the basics of drama art.

In the beginning, the young woman became famous as a stand-up comedian. In 2004, she began performing at Gotham Comedy Club, and three years later her performance was shown on the Comedy Central channel. Producers noticed the talented actress who could make people laugh. They offered her to join the ranks of the participants of Last Comic Standing.

Schumer confidently conquered television world and viewers’ hearts. 2013 was the right time to come in full force. Amy launched her own project, Inside Amy Schumer, on Comedy Central, and she received the first Emmy Award for it.

Critics and fans of stand-up comedy were enthusiastic about the show of the comedian in a skirt, calling the project the best feminist comedy series. The girl covered favorite themes in a funny manner, showing their absurdism. There was no any preaching, just irony, and banter.

Her performances were frank, and sometimes it seemed that there was nothing forbidden for the woman and she went beyond all limits. However, Amy has a taboo because she does not touch acute social topics.

In 2015, Schumer’s work brought her the Critics' Choice Television Award. In general, that year was very fruitful for the actress, including the hosting of the MTV Movie Awards. People also remember her joke at the Time Magazine Gala Evening when she collapsed at the feet of Kim Kardashian and Kanye West.

In 2016, she was involved in a scandal. Comedians Tammy Pescatelli, Wendy Liebman and Kathleen Madigan accused Schumer of plagiarism. The comedians said on the Internet that the woman was stealing their jokes. For example, Madigan once suggested during a performance that rich people who kept on a diet should have employees who would take the food of their hands.

Later, Schumer joked so. The woman worried about this scandal a lot, and she even agreed to pass a lie-detector test. Subsequently, the comedians-prosecutors admitted that they were wrong and asked their colleague for forgiveness.

They were followed by the offers from creators of full-length movies. Amy got a bit part in the fantasy melodrama Seeking a Friend for the End of the World. In this film, the young woman met outstanding movie stars - Keira Knightley, Steve Carell, Adam Brody.

In 2013, Amy along with comedians Rachel Feinstein, Marina Franklin, and Nikki Glaser made the audience laugh in the show Women Who Kill. The comedy is about an hour long and consists of several parts which are logically connected.

The women talked about their experience, their way of life, the secrets of achieving success and maintaining a positive attitude towards life. The actresses shared difficulties with men, dating stories, and told about some political and social events with irony. Fans of the stand-up comedy have appreciated this work.

Amy Schumer decided to try her hand at screenwriting. Thus, the story Trainwreck was created, and she portrayed the title character.

The project is to some extent biographical. The actress showed some events of her life, frankly spoke about her attitude towards the issues of puberty, revealed details of relationships with young men and parents. However, all the problems look absurd, and the screenwriter showed them in an unusual manner.

Amy’s colleagues were famous American comedians. Colin Quinn played her father, Bill Hader portrayed a boyfriend, Jim Norton got a bit part of a coachman. The film was a great success, viewers and critics liked it. By 2016, Schumer was already named one of the most influential people in the United States, and then the woman was also ranked the highest paid actress of comedy shows and films.

Fans know that Amy dated Nick Nemeth, a professional wrestler, who had a bright stage name, Dolph Ziggler. The list of her boyfriends also includes comedian Anthony Jeselnik. At the end of 2015, the news spread on the Internet that the actress had relationships with furniture designer Ben Hanisch. Their relationship lasted for 1,5 years, and then the couple broke up.

In the winter of 2018, fans found out the good news that the woman got married. However, nice photos where Amy kissed and hugged have already appeared on her Instagram page. Chef Chris Fischer became her husband. The lovers dated only three months before the wedding. The marriage ceremony took place in Malibu, in a mansion located at the very edge of the ocean.

Amy is often invited to play in films. In 2017, two films with her participation were released. Schumer and Goldie Hawn got the leading roles in the movie Snatched.

The actresses played a daughter and mother, who were once kidnapped. Schumer has also become a producer of this film.

In the spring of 2018, the blond actress got a leading role once again in the light, sparkling comedy I Feel Pretty. Amy Schumer portrayed young woman Renee Barrett who did not like her appearance but managed to feel pretty. 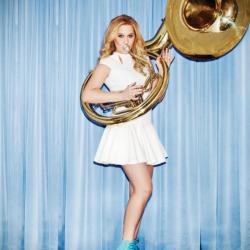