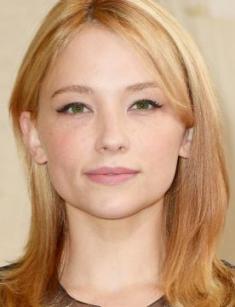 Haley Bennett is a Hollywood actress who made her debut in the musical comedy Music and Lyrics, and immediately won the hearts of viewers and attracted the interest of directors. Subsequently, she consolidated her success, working in the movies Marley & Me, Hardcore Henry, The Magnificent Seven.

Haley Bennett was born in sunny Florida in January 1988. But the girl lived in the town of Fort Myers only for a few years. The family moved to Stow, Ohio, where Haley graduated from high school.

Later, the parents returned to their native Fort Myers, where the daughter began attending music school and taking acting classes.

Haley Bennett became fascinated by acting, and the girl decided to connect her life with this field. The mother supported her daughter, and in 2005, when she passed the final exams at high school, the woman went with her to Los Angeles to be closer to the dream factory.

Haley Bennett’s acting career took off quickly. Two years after moving to Los Angeles, the young actress was invited to the English-American musical comedy Music and Lyrics. The project was a golden ticket to Hollywood for Haley. Indeed, the stars of American cinema, Drew Barrymore and Hugh Grant, played the title characters in this movie, directed by Mark Lawrence. Bennett's musical abilities were very useful. All the heroes of the comedy sang, and Haley was no exception.

After the release of the movie hit, directors noticed the talented girl. Haley’s photos appeared in the popular GQ magazine, and a recording studio signed a contract with the girl. The beginning actress and singer began working on her debut album.

Haley soon changed light comedic roles for more challenging work. The actress was offered to play a heroine in the mystical thriller The Haunting of Molly Hartley. It is noteworthy that Bennett got the first leading role in this project. Haley was to portray a girl suffering from the attacks of a mentally ill mother. But after a while, the daughter understood that she also had signs of the disease. To play in the movie, the actress needed to prepare for a role thoroughly. But critics praised Bennett's acting.

The actress managed to reach the movie stardom after the release of the family drama-comedy Marley & Me. This project, directed by David Frankel, who became world-famous for the movie The Devil Wears Prada, helped Haley climb to a career ladder. Hollywood stars Owen Wilson and Jennifer Aniston played the leading roles in the comedy.

Haley Bennett's acting career has developed rapidly. The next work in the filmography of the actress was the leading role in the horror movie The Hole. Young Haley Bennett portrayed heroine Julie, who discovered with friends a secret hatch in the basement of an abandoned house. Having pushed it, the guys released the dark forces into the world.

In 2010, Bennett accepted an invitation from the creators of the fantasy comedy Kaboom. The actress got the role of a gay girl, the friend of the title character, Smith (Thomas Dekker), who was in search of love. The movie was awarded the Queer Palm at the Cannes Film Festival.

Haley’s subsequent projects include the melodrama Arcadia Lost, the crime drama Outlaw Country, and Deep Powder. In 2015, Haley Bennett and Patrick Wilson appeared in the crime thriller A Kind of Murder. The story took place in the middle of the XIX century in New York City. The same year, she participated in the shooting of the fantasy action movie Hardcore Henry, directed by Russian movie maker Ilya Naishuller, featuring such foreign actors such as Sharlto Copley, Haley Bennett, and Tim Roth.

In 2016, fans of the talented Hollywood actress saw two new notable projects, featuring Bennett. In the western The Magnificent Seven, the actress got the supporting role, a resident of the town of Rose Creek.

In the thriller The Girl on the Train, Haley played the role of Megan, Scott's wife (Luke Evans), who disappeared irrevocably one day. It was Rachel (Emily Blunt), an unemployed alcoholic, who noticed the loss. So, she began her investigation.

The blond and beautiful actress's path to success in Hollywood was difficult and thorny. The actress claims that she saw many young actors who were more talented than her, but could not fulfill their potential because of fear and constraint. Some people faded away because they were distracted by something else.

Therefore, the personal life of Haley Bennett was a side bet because her career had top priority and required constant attention. The star has many admirers and often appears with handsome men. But Bennett has not announced a serious love affair yet.

In her free time, the actress likes listening to music, singing, and dancing. They say that Haley has excellent talents in these spheres.

In addition to her acting career, Haley collaborates with international brands and participates in advertising campaigns. In early 2017, the woman signed a contract with the clothing brand Rag & Bone and became its official face. The same year, Bennett’s photos appeared on the pages of fashion magazines as a part of the Chloé fragrance campaign.

Chanel is also listed among the brands which collaborate with the actress. The girl posts the best pictures on her Instagram account.

However, a month earlier, the woman had worn one of the most beautiful dresses at the Critic’s Choice Awards ceremony. Reporters mentioned the ability of Haley Bennett to apply blush correctly.

Haley's ratings are increasing every year, and the actress has long been included in the list of favorite actresses of the best Hollywood directors. Negotiations with Haley Bennett are underway regarding her participation in the movie Resistance, which will be shot in the autumn of 2018. The partners of the American actress will be Matthias Schweighöfer, who will get the role of the Nazi Klaus Barbie, and the lead actor, Jesse Eisenberg, portraying mime artist Marcel Marceau. Haley Bennett will appear as heroine Emma, an ally of mime Marceau, a member of the French Resistance.

Haley Bennett has a net worth of $2 million.