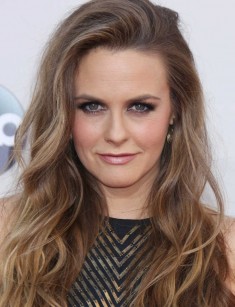 Alicia Silverstone is the icon of teenagers in the 1990s. After she appeared in several music videos of Aerosmith, she was called the Aerosmith girl for a long time. Alicia found herself tremendously popular: the red-haired beauty with big gray eyes was always on the TV screens and made a style guide for American and international teens.

Alicia was born in October 1976 in a prestigious neighborhood of San Francisco. The Jewish father came from London; he successfully worked with real estate property. The mother was Scottish; before the wedding, she converted to Judaism. It was the father’s second marriage; the man had already had two children: David and Kezi. Later, Kezi became a popular rock singer in London.

Although the family kept the strict traditions (the children regularly went to a synagogue and became bar mitzvah), Alicia dreamed of the modeling and acting career. At six, the girl asked the father to take pictures of her in a swimsuit and send them to modeling agencies. The father was surprised but agreed to do that. Soon, the family received the answer: the little girl conquered everybody, and she was offered to star in ads.

The girl began her movie career early: she was invited to the popular American series The Wonder Years when she was a teenager. After the successful start, people called the actress the dream girl. The young artist liked to work on the movie set, and she continued to frequent castings. Still, she was unlucky: refusals followed one another.

When Alicia turned 15, she was fortunate: the girl met Liv Tyler, the daughter of Aerosmith leader, who was of the same age. The friend helped Silverstone get in her father’s music video. The teenagers appeared in “Crazy”; the hits “Cryin’” and “Amazing” were presented soon.

MTV and other channels were broadcasting those music videos, and Alicia Silverstone became a star. The Aerosmith girl was frequently invited to modeling and TV agencies. Silverstone dropped school and became legally independent from her parents which gave her the chance to earn a lot despite her minor age.

In 1993, 17-year-old Alicia Silverstone was invited to the movie The Crush. The role of a devious teen girl Adrian Forrester was starring. As the story runs, the young Lolita-like character is attracted to an adult man, a journalist Nick Eliot, and makes efforts to deprive the person who does not love her back of everything he has. Silverstone played the femme fatale splendidly and won her first prizes:two MTV Movie Awards for Best Breakthrough Performance and Best Villain.

Two years later, the actress strengthened her positions in cinematography: she played in the movie Clueless and was a success again. The project became a hit; young Alicia received new prizes and awards. Columbia Pictures offered her a beneficial $10 million contract.

The next projects could not reach the same success. Guy Ferland’s thriller The Babysitter starring Alicia was not released.

In the adventure fantasy movie Batman & Robin, the actress collaborated with George Clooney. Critics tore the movie to shreds. The former model was criticized severely for her lardy figure emphasized by the tight superhero costume. Silverstone got the Golden Raspberry Award for Worst Supporting Actress.

However, the high box-office of the movie was a pleasant surprise: the audience was not so strict to Alicia as picky movie experts.

Alicia Silverstone almost got the role of Leonardo DiCaprio’s lover in the romantic melodrama Romeo + Juliet. However, the movie creators decided at the last moment the actress Claire Danes looked more like Juliet. Although both young women had the right face of an angel, Alicia’s body shapes were too rounded for that character.

The tightly-plotted movie Excess Baggage with Benicio del Toro brought no success as well, even though the plot was quite thrilling. Silverstone played the young daughter of the millionaire too busy to listen to his child. To catch the father’s attention, the daughter stages her kidnapping and hides in a car trunk. Unfortunately, del Toro’s character steals that very vehicle.

Again, critics gave a cold shower to Alicia’s acting. The star received the Golden Raspberry award which meant she was called the worst actress. Nevertheless, the audience liked Excess Baggage. Silverstone earned $5 million for this project.

In 1999, Alicia Silverstone collaborated with Brendan Fraser and Christopher Walken in the romantic comedy Blast from the Past. The three actors used to work together at the Excess Baggage movie set.

Further on, the artist appeared in the movies Braceface and Global Heresy.

In 2004, the actress managed to “rehabilitate”: she was nominated for the Golden Globe Award for the role in the popular series Miss Match where she played a “soft” divorce lawyer who brought together spouses instead of divorcing them. The war drama New World and the mystical project Hideaway were top-grossing.

In 2006, Alicia played one of the central parts in the spy action movie Stormbreaker with the young actor Alex Pettyfer. The actress came to the movie set two days after the wedding and disproved the rumors about her pregnancy. As the woman was preparing for the role, she had martial art training: her character, Jack Starbright, fought a lot. The martial art expert, Donnie Yen, became Alicia’s instructor.

In the following years, Silverstone was gaining back her popularity. Critics and ordinary people appreciated the movies Butter and Vamps; Jennifer Garner, Olivia Wilde, Ashley Greene, and Krysten Ritter became Silverstone’s stage partners. In comparison, the creators of Gods Behaving Badly starring Sharon Stone and Christopher Walken were surprised when the project was not a success.

Alicia Silverstone is known as a vegan and passionate protector of animals. She has been included in the lists of the most beautiful vegan women. In spring 2012, the actress wrote a letter to the Russian President Vladimir Putin and asked to provide the arrested member of the infamous Pussy Riot, Maria Alyokhina, with a vegan diet.

Alicia Silverstone’s personal life is the object of people’s attention. For some time, the actress dropped a hint in her interviews about her bisexuality. Perhaps, it was a piece of marketing: Alicia has never been noticed in romantic relationships with women.

For some time, the media saw Alicia as the comedian Adam Sandler’s bride: the couple was engaged. Still, the woman had a different opinion. She chose the singer Christopher Jarecki and lived with him in civil marriage for seven years: for Hollywood, it was the example of stability. In summer 2005, the lovers officially married: the wedding ceremony took place near the picturesque Lake Tahoe.

In May 2011, Alicia and Christopher’s son Bear Blu was born. The actress confessed she had never been happier. For that moment, the role of a mother became the priority for Silverstone.

In February 2018, the media reported Alicia broke up with her husband. The couple made the decision together and split up without hard feelings and scandals. The former spouses have a son and devote all their energy to his upbringing. However, Alicia and Christopher cannot see their future together.

Thousands of fans follow the actress’s Instagram page and learn the latest news. The artist regularly posts working and personal photos. She also posts on Twitter.

The celebrity loves taking care of her own kitchen garden. As soon as the woman purchased a house, she kept some space for plant patches. The majority of vegetables Alicia cooks have been grown up by herself; she is very proud of that.

Silverstone is fluent in French.

After the childbirth, Alicia limited herself with series and short movies for a while; today, she is a top actress again.

In 2017, the family comedy Diary of a Wimpy Kid: The Long Haul about the adventures of a teenager Greg Heffley came out. Alicia got one of the lead roles.

In May 2017, the thriller The Killing of a Sacred Deer was released; the actress received a supporting role. Colin Farrell and Nicole Kidman starred in the movie.

In summer 2018, the series American Woman was premiered. The story is set in the 1970s. A housewife Bonnie (Alicia Silverstone) is going through a challenging period: after the divorce, she stays alone with two daughters. The woman has to survive without any means of support. Jennifer Bartels, Mena Suvari, Cheyenne Jackson, and other actors appeared in the project.

2018 was also marked with the comedy Book Club. A group of sophisticated, intelligent women suddenly got the book 50 Shades of Gray by E. L. James. From that moment, their lives changed dramatically. 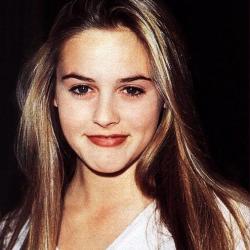