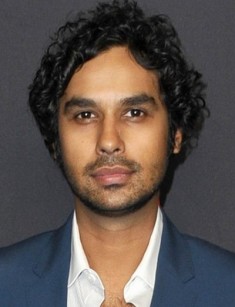 Kunal Nayyar, the British of the Indian origin, has earned his fame for the role of an astrophysicist Rajesh Koothrappali in the series The Big Bang Theory. Since 2007, the actor has been “living” the life of the young scientist who had selective mutism and could not talk with women around. Thanks to this role, the actor became number three in the Forbes list of the highest-paid actors in 2015: he earned $20 million.

Kunal Nayyar was born on April 30, 1982, in Hounslow, London, two weeks before the childbirth was expected; the mother was given a cesarean section. His family belonged to the Punjabis. When the boy turned four, the parents moved to New Delhi, India, where Kunar attended St Columba's School.

In his childhood, Nayyar played badminton. He was given the nickname “Tiger Woods of Badminton.” In 1996 and 1997, he won the prestigious Indian competition, Badminton Championship Match. In 1998, the amateur Kunal lost to a professional player and left the sport.

The future actor realized he wanted to devote his life to art, but his practical parents insisted he should receive “the decent” education. In 1999, the young man entered the University of Portland, Oregon, to study business administration.

The student Kunal Nayyar used every chance to practice his natural acting talent. In his first year, the young man and his roommate Diaby, the French, participated in the school festival International Night: Kunal sang, his friend played the guitar, and two more international students played the banjo. The hastily gathered group performed the Mexican folk song “La Bamba.”

During the second year, Diaby won a scholarship at a basketball school; thus, Nayyar did not have his best friend nearby. He did not want to stay alone and took up acting classes and participate at student theater performances. His talent was appreciated: the young man gained the Mark Twain Award and Sundance Theatre Lab. As he took part in the American College Theater Festival, the would-be star made sure he wanted to be an actor.

In a while, Nayyar entered the Temple University in Philadelphia, Pennsylvania and became a Master of Arts. At the same time, the young man took up acting classes at the Royal Shakespeare Company in Great Britain. The exotic appearance and undoubtful talent gave the artist the opportunity to perform in British theaters when he was pretty young, 22 years old.

As Kunal Nayyar graduated from the university, he appeared in mobile app and games commercials in the British television. American agents noticed the man after he got a role in Rajiv Joseph's play Huck & Holden.

The story was somehow similar to the actor’s life. A young man from India goes to the United States via an exchange program to study engineering. Before he comes back to the country where he is made to marry, the student decides to try the liberal Western lifestyle. However, he cannot relax because of his literature task: to compare two rebel boys, Mark Twain’s Huckleberry Finn and Holden Caulfield from J. D. Salinger’s The Catcher in the Rye. The young man is exhausted: he cannot find a book with a weird title Huck and Holden. As it turns out, it is only the title of the essay that the student should submit the next time.

From early childhood, Nayyar was interested in theater and movies; Winnie Cooper from the TV series The Wonder Years played by Danica McKellar was his first love. By the way, when The Big Bang Theory was made, Kunal was lucky to meet McKellar: in the episode "The Psychic Vortex” (season 3, episode 12), Raj kissed Abby played by the actress. To Nayyar’s joy, that moment was re-shot six times.

In addition to acting, Kunar was fond of writing stories. In 2006, he created a play Cotton Candy; it was staged in New Delhi and received the audience’s appreciation.

At the same time, Nayyar appeared in the TV series NCIS (season 4, episode 12 “Suspicion”); he got the role of an Iraqi terrorist Youssef Zidan.

At the end of 2006, Nayyar’s agent discovered that CBS channel was looking for actors for the new series about young scientists and sent a resume. Kunal was invited to the auditions; he succeeded and got the role of Rajesh Koothrappali. The project became the turning point for the actor.

The Big Bang Theory is a comedy about four scientists: the physicists Sheldon Cooper (Jim Parsons) and Leonard Hofstadter (Johnny Galecki) and their friends, the astrophysicist Rajesh Koothrappali and the engineer Howard Wolowitz (Simon Helberg). Their life is full of scientific experiments, computer and board games, and, of course, failures with women.

Penny (Kaley Cuoco) is Sheldon’s and Leonard’s neighbor. She has moved to California to become an actress and works as a waitress in a bakery. Both Leonard and Howard are trying to get her attention. Raj, who is also interested in dating, is left behind: because of his selective mutism, he cannot talk to women who are not his relatives.

The situation becomes ironic when Raj gets drunk and talks to women: he becomes more charming than all of his friends. In one of his interviews, the actor noticed he had something in common with his character: they were both naïve, liked to play video games, and tuned out of the reality in front of a TV set. Similar to Raj, Kunal loves comedies, Indian movies, and old-fashioned sneakers. Although the artist dresses in a different way, he is pretty similar to the astrophysicist.

The audience liked The Big Bang Theory. Kunal believes that people watch the series because it is about the outsiders who are exploring the real world and trying to find love and friendship.

Everything has its end. In 2018, CBS broadcast the final 12th season of The Big Bang Theory; the last episode will be released in May 2019.

In 2014, the actor worked on a full-length movie for the first time: he gained the role of an Indian doctor in Dr. Cabbie. His character moved to Canada to begin a new life. There were no jobs in hospitals for him, and the man had to become a taxi driver. One day, a pregnant woman is giving birth right in the car; the doctor has nothing to do but to deliver the baby. Everything goes on well, and the man decides to examine patients in the vehicle.

In 2015, Nayyar played a Nepali student in Jesse Eisenberg’s play The Spoils. In May and June, the performances were held in the United States; in 2016, they were given in Great Britain.

Unlike Rajesh Koothrappali, Kunal Nayyar is happy in his personal life. In December 2011, he married a model Neha Kapur. The Indian wedding was held in New Delhi. The celebration lasted for six days. The pictures from the ceremony impress: the colors were bright, and the meal was luxurious; more than a thousand guests were there to congratulate the newlyweds.

Judging by the couple’s photos on Instagram, they have no children.

Neha Kapur is the 2006 Femina Miss India and one of the top 20 participants in the Miss Universe pageant. The model’s height is different from traditional model standards: 176 cm. Nayyar’s height is 171 cm.

In 2015, the actor had his autobiography Yes, My Accent is Real released; he told his readers about his childhood, student years, and first steps in the harsh world of show-business.

Nowadays, Kunal and his wife live in Los Angeles; they have a dog, Boba.

In 2020, the second part of Trolls is going to be released; the actor accepted the offer to voice one of its characters. Besides, Nayyar is included in the cast of the movie Dogs Best Friend starring Megan Fox and Janet Montgomery. 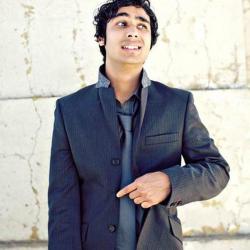