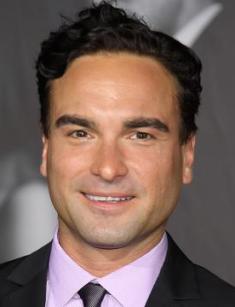 John Mark Galecki is the American actor who became famous for the role of the scientist Leonard Hofstadter in the popular sitcom The Big Bang Theory. According to Forbes, the man was the second highest-paid actor on television in 2018.

The would-be artist was born on April 30, 1975, in Bree, Belgium; the boy’s father, the US Air Force member, served there.

Galecki had Italian, Polish, and Irish roots. In 1978, the parents moved to Oak Park, the suburban area of Chicago, Illinois. Soon, his brother Nick and sister Allison were born.

Johnny separated early: he finished the eighth grade and quit school; he left the house at the age of 14. By that time, the teenager had already been employed at the theater and participated in movies; he had the opportunity to pay for his own apartment in Burbank.

Johnny debuted at the Chicago theater at seven; the role brought him a nomination for a theater award in 1986. The next year, the young talent began to work on television and took part in two series. In 1988, Galecki received a secondary role in A Night in the Life of Jimmy Reardon with River Phoenix, Ann Magnuson, Meredith Salenger, and Ione Skye. The project grossed $6.2 million in the United States.

In 1989, Johnny joined the cast of Jeremiah S. Chechik’s National Lampoon's Christmas Vacation starring Chevy Chase. Soon, the actor played a teenager in love in the series Blossom; it was his first kiss in front of a camera. Mayim Bialik collaborated with Galecki.

At the beginning of the 1990s, Johnny was invited to an episode of the ABC sitcom Roseanne; it was included in the top 50 series of all time according to TV Guide. The director and the lead actress Roseanne Barr liked the young man, and Johnny signed a long-term contract in a while.

1993 was marked with the horror A Family Torn Apart with Gregory Harrison and Neil Patrick Harris. The next year, the actor was given Young Artist Award.

At the end of the 1990s, Galecki worked on the slasher I Know What You Did Last Summer, comedy Bean, and melodrama Bounce with Ben Affleck and Gwyneth Paltrow.

In the mid-2000s, the actor participated in many episodes of top-grossing projects: Happy Endings, Hitch, My Name Is Earl. 2003 brought the lead role in Bookies.

The Broadway drama The Little Dog Laughed was premiered in 2006. The actor got the role of Alex and appeared naked on the stage. The project brought him the Theater World Award and the nomination for Tony. At the same time, the man participated in other Chicago plays.

In 2007, Johnny began to star in the series that turned him into an international star. The duo of Johnny Galecki and Jim Parsons who personified Leonard Hofstadter and Sheldon Cooper in The Big Bang Theory was immensely popular among the audience for more than ten years.

The sitcom is based on the love suspense between short Leonard (Galecki’s height is 5.41 feet or 165 cm., and his weight is 147.71 lbs. or 67 kg.) and his neighbor, the blonde beauty Penny (Kaley Cuoco). In 2011, this role brought Johnny the nominations for Emmy and Golden Globe.

The same year, the actor participated in Andrew Niccol’s fantastic thriller In Time and personified Borel. Two years later, he worked on the movie CBGB about punk rock origin.

The Big Bang Theory played a significant part in the man’s personal life. Galecki used to date his partner, Kaley Cuoco; the couple split up in 2010.

In 2012, the artist began to see Kelli Garner, the star of The Aviator; they spent two years together.

Further on, the singer Naomi Robin became Johnny’s girlfriend; they posted pictures on Instagram. Besides, the actor played the guitar and drums in Naomi’s band.

Today, Galecki has a romance with 21-year-old Alaina Meyer; they are expecting a baby.

The actor continues to participate in various projects. In 2017, the horror Rings by Javier Gutiérrez was premiered; Galecki gained the role of Professor Gabriel Brown.

At the end of June, Johnny’s house was destroyed during California fire; it was located not far from Santa Margarita. The actor’s vineyard also burned down. The artist emphasized the fire fighters’ courage that helped prevent human losses.

In 2019, the last season of The Big Bang Theory was aired.