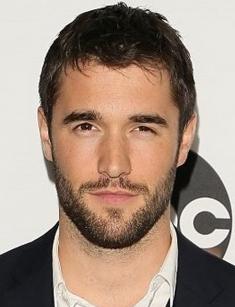 2018 was successful for Joshua Bowman both in his personal life and in his professional life. First, the guy decided on a responsible step and married a colleague Emily VanCamp after six years of relationship and a year later after the announced engagement. Second, he was included in the list of actors of the cult TV series Doctor Who.

On the fourth spring day of 1988 in Berkshire (Windsor and Maidenhead), where Kenneth Branagh, Kate Winslet and Emilia Clarke are from, another representative of the creative profession, Joshua Tobias was born. His older sister Scarlett, by the way, is also an actress that the audience could see in the films Chance and Hollyoaks. In the veins of Joshua flows Jewish blood (thanks to his father), as well as Italian, English and Irish (from his mother).

Bowman received his first education at the boarding school at Wellington College. Then he studied at the Lee Strasberg Institute in New York, where the main emphasis was on the development of the ideas of Konstantin Stanislavski. His classmates in the school were Daniela Ruah (NCIS: Los Angeles) and Christiane Seidel (Godless).

At the age of 18, Joshua was a professional player for Saracens F.C., where he had a friend Danny Cipriani, now one of the sexiest rugby players. But the injury (twice dislocated shoulder), as well as the former baseball player Ryan Guzman, forced to abandon thoughts about sports and sent to the cinema. The celebrity admitted once in an interview that if he had not this profession, where he is now very successful, he would have become a DJ, Joshua likes music since childhood.

The start of the creative biography put the "magic" serial film Genie in the House in 2007, released on Nickelodeon UK, where the actor appeared in two episodes in two roles – Dimitri and Royal Hunk. Afterward, the directors planned to shoot three films from a closed project but so far no changes on this issue have been observed.

After two years, Joshua made his debut in the series Myths, where he was entrusted to embody Zeus. He was involved in the 12th and 13th seasons of Holby City at the same time, telling about the staff of a fictional hospital.

Then the horror began, or rather, films in this genre. First, 13Hrs (Night Wolf), shot on the classic story: the company of young people goes to a country house, where instead of the planned vacation start survival games. The hero of Bowman, by the way, could not pass it to the final of the tape. Then the film Prey, in which it is not possible for teenagers to get to another city.

Participation in the film Make It or Break It, which tells about ambitious athletes, led to the film Revenge, it made a recognizable serial actor of Bowman. The convincingly embodied character Daniel Grayson gave the guy a nomination for Teen Choice Awards 2012.

Before the episode in the series Doctor Who, introducing him with Rosa Parks, the founder of the movement for the rights of blacks, Joshua showed viewers some of the secrets of the scientific world from the screens in the series Time After Time.

The brown-eyed handsome guy (he is 72 feet (183 cm) tall and he weighs 154 lbs (70 kg)) never suffered from a lack of attention from the famous representatives of the opposite gender.

"You want to be safe in a relationship but you don't know what will happen next. Everyone should have his secrets but if I am asked a question, I will answer honestly" - perhaps this is the main secret of his success with women.

In 2009 it was known that the heart of Joshua employed the queen of soul, Amy Winehouse. The beginning of the rumors was a joint vacation of young people on the island of Santa Lucia, which curious and ubiquitous paparazzi showed to the world.

"She's a great, perfect girl and we're just close friends. It is fun with her, she is so charming and in great shape," - beloved shared his enthusiastic emotions.

"Josh is beautiful and clean and I like it. When I'm with him, I don't need drugs to feel good. It's like I escaped from hell, I'm in love again – look at me, I'm glowing again," the singer commented her feelings.

However, the affair did not last long. The guy stayed in a relationship a little more, about a year with the next chosen one, a blond colleague in the series Make It or Break It, Cassie Scerbo.

Then his attention was attracted to only "co-workers." The man was dating Miley Cyrus. He was also credited with an affair with Ashley Madekwe, apparently wanting to transfer the feelings of their characters from Revenge in real life. But the most prolonged and severe feelings happened to Emily VanCamp.

In the spring of 2017, the couple got engaged and they got married in the Bahamas the next year, in mid-December. Black and white photos from the ceremony generously published on his wife`s page on "Instagram," she did not forget to thank all those present, friends, her lover and the fashion designer Lela Rose for creating a dream dress.

In addition to the already mentioned debut in the series Doctor Who, Joshua starred in the 2nd season of the television series horror Lore. His character is an American rocket scientist and a big fan of the occult Jack Parsons, who lived in the last century. Josh has a net worth of $3 million.

In 2019, his filmography was supplemented by the series Escaping the Madhouse: The Nellie Bly Story, where his partner was Christina Ricci, and Bowman appeared on the image of a doctor.

As for the popular social networks "Instagram", "Facebook" and "Twitter", the actor in this regard is slightly old-fashioned and refrains from virtual communication with fans. However, they do not get upset and create numerous fan groups, where they share pictures of the personal life of their idol, as well as publications from the set.