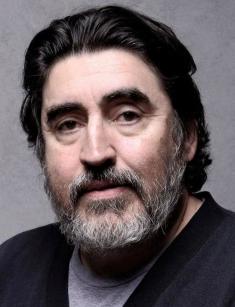 English and American actor Alfred Molina became well-known after filming in the exciting action adventure movie Raiders of the Lost Ark in 1981. Although he played only a supporting role, it helped the actor to make it into the film industry. Nowadays, the man is an in-demand actor, and his filmography includes more than one hundred projects.

Alfred was born in London, UK, in the spring of 1953. The boy's parents were emigrants. His mother moved from Italy, and his father was from Spain. The young people met in London, where the family settled.

Molina spent his childhood in a working-class district in Notting Hill that was inhabited by many other immigrant families. They were not rich; his father worked as a waiter and then as a driver. The mother was a maid who cleaned rooms in a hotel.

Alfred decided to become an actor at the age of nine. The boy watched the film Spartacus directed by Stanley Kubrick with Kirk Douglas and Laurence Olivier in the lead roles, and it inspired him. After that, he decided to study at the Guildhall School of Music and Drama, and later he auditioned and was accepted as a member of the National Youth Theatre in London. So Molina’s credentials included the first productions and roles in movies, which he dreamed of since childhood.

Molina made his acting debut in 1978 in the British sitcom The Losers. Alfred’s next work was the series Everyman. Although he played bit parts, director Steven Spielberg noticed the actor and invited to play a supporting role in the film Raiders of the Lost Ark.

After that, other directors paid attention to the talented young man and began to invite him to their projects. So in 1983, he played Yakov Blumkin in the mini-series Reilly, Ace of Spies and John in the film Meantime. In 1984, he appeared as Cezar in the film Ladyhawke.

In 1985, Alfred was invited to play the title character of Sergei in the film Letter to Brezhnev which also starred Peter Firth, Tracy Lea, and Alexandra Pigg. The film tells about two women who meet Russian sailors at a local bar. Soon the men are forced to leave England, although the young people fell in love and don’t know what to do.

Until the early 1990s, Molina had filmed mainly in TV series, including Screen Two, C.A.T.S. Eyes, Boon, Casualty, Performance. However, he later decided to give up such projects and plunged into the full-length cinema and Broadway productions. In the mid-90s, the man moved to the USA.

When he lived in America, Alfred appeared in the comedy The Perez Family directed by Mira Nair, in the western film Dead Man with Johnny Depp, Gary Farmer, and Crispin Glover. In 1995, he also worked on the set of the horror film Species, the crime thriller Scorpion Spring and the detective story Before and After directed by Barbet Schroeder. In 1997, he played the role of Konstantin Levin in the melodrama Anna Karenina and appeared in the film Boogie Nights.

Since 2000, Alfred has expanded his activities playing voice roles. His first work was the animated film The Miracle Maker. He also voiced characters in Justice League, Rango, Wonder Woman, etc.

At the same time, Molina appeared as Hercule Poirot in the 2001 film Murder on the Orient Express, directed by Carl Schenkel and based on the novel by Agatha Christie. Although he coped well with the task, this film did not become popular.

In 2002, Alfred appeared in the movie Frida with Salma Hayek in the lead role. The film focuses on the life of the Mexican artist who had an accident and suffered from an injury for all her life. The young woman was in a hospital and could not move, but she began to draw through her efforts.

In 2004, director Sam Raimi invited Alfred to play in his new action movie. In the superhero film Spider-Man 2, the actor got the role of Doctor Octopus. The movie grossed $783 million at the box-office against a production budget of $200 million. Later, Molina appeared in the film The Da Vinci Code, Silk, The Lodger, The Pink Panther 2.

2010 was the most successful year in the actor’s career. The man played in the film Prince of Persia: The Sands of Time, which grossed more than $300 million worldwide, and also appeared as Maxim Horvath in the movie The Sorcerer's Apprentice.

There is little information about the personal life of the talented actor. In 1986, Alfred married Jill Gascoine. His wife is a professional actress, although she began filming only nine years after the wedding. Perhaps, her husband inspired her. The couple has a daughter, Rachel Molina. Alfred is also a grandfather to Alfie (born November 2003) and Layla (born May 2006).

In 2004, Molina announced that he had become a U.S. citizen, so now he has dual citizenship. He is fluent in English, Italian and Spanish. Since 2017 she has been living in La Cañada Flintridge, California, USA.

Besides his primary occupation, Alfred is a member of an organization which protects the rights of people with Acquired Immune Deficiency Syndrome (AIDS). The celebrity often donates towards AIDS research and also participates in different campaigns.

Nowadays, Alfred continues to film. In 2018, he played in the film The Devil Has a Name directed by Edward James Olmos, which is scheduled to be released in 2019, but the exact date of the premiere has not been announced yet. He also appeared in the horror film Relive which premiered in late January 2019.

When fans look at the latest photos of the actor, they say that Alfred was fitter and slender in his youth. Although the weight of Molina is unknown, now he seems quite stout with a height of 6.20 ft. (189 cm). Viewers blame his age and lack of time to go to the gym for his weight gain.

Alfred Molina has a net worth of $8 million.