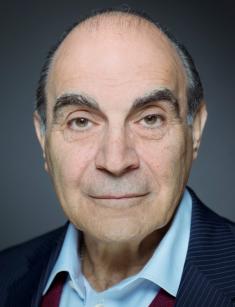 The creative world is ambiguous. It was a great ceremony of the prestigious film awards in 2014 when the whole world repeated like a mantra, the phrase " Oscar for Leo" but the actor did not receive it. David Suchet has not yet been awarded for a single prize for his role of Hercule Poirot, adored by millions.

May 2, 1946, the second son, who was named David was born in London in the family of the obstetrician and gynecologist Jack Suchet, who researched in collaboration with Sir Alexander Fleming and his wife, actress Joan Patricia.

The family biography is rich: his grandfather on the father's side Izidor was of Lithuanian Jewish descent and moved to Africa, changed the name Suchedowitz. The ancestors on the mother's side were from the Russian Empire: his great-grandfather was one of the first press photographers (he has photos of Winston Churchill and Albert Einstein, he was from Latvia, his great-grandmother was from Grodno. They moved to Britain from Paris.

As a child, David was a fan of Doctor Who and wanted to play in the film adaptation of this work, which impressed the young reader that he hid from the Daleks behind the sofa. And the desired was realized in 2017: the celebrity shone in the role of a guest star.

At an early age, the boy loved to transform into cowboys and Indians. The actor admitted once in an interview that he was entirely alien for ambition as a child: the boarding school Grenham House, which he visited with his older brother John and younger Peter, seemed to him the most boring place on the Earth. And the only thing he was interested in here – a field for Rugby, tennis and handball.

Suchet often learned on his own, what his soul required. For example, at the age of 14, he felt that there was not enough music in his life and he tried to master the clarinet soon.

Soon the school had to be replaced by Wellington School, where the teenager had an interest in reading thanks to his English teacher, he liked especially plays on roles. And, although he tried to follow in his father's footsteps for the first time and enter the medical college as a surgeon (but he didn`t manage to pass the exams in physics and chemistry), he joined the National Youth Theatre at the age of 18. And he trained at the London Academy of Music and Dramatic Art.

"I was always short and stocky. Therefore, when I entered the theater after graduation, I found out that I perform the role of age characters: I played the role of 40-year-olds and 50-year-olds at the age of 23 years because of my deep voice, physique and growth", the artist shared, remembering his youth.

After graduation, David became an actor of the Watermill Theatre, which he called perfect and then he joined the Royal Shakespeare Company, where he is now. His debut production was a sad "Romeo and Juliet": Suchet tried on the image of Mercutio.

In the future, his Salieri from the Broadway play was awarded the nomination for the Laurence Olivier Awards (along with the film Who's Afraid of Virginia Woolf?) and the performer was appointed Officer of the Order of the British Empire

He appeared in the series The Mating Machine on television for the first time. His first notable role was in the movie A Tale of Two Cities. He again starred in a multi-episode of the film Oppenheimer about the theoretical physicist Edward Teller the same year, who created the hydrogen bomb. He had 25 movies until he received the star character of Agatha Christie.

Suchet was approached by the producer Agatha Christie’s Poirot one day during lunch to the table, who made the films Death On The Nile, Evil Under the Sun, Murder on the Orient Express and told him that he wanted that he played a detective. David froze with a spoon in his hands: a serious Shakespearean actor, playing a balding picky detective?

He was fascinated by the character after reading the script, who had such qualities that were impossible to resist. After consulting with his brother, the man agreed to the shooting, deciding to turn into Hercule as his author created him.

"People often ask me whether I tried to make Poirot popular. I didn't. I started reading Agatha Christie's novels to play a detective she could be proud of. So there were funny costumes and a small mustache. It turned out exactly as she wrote," the actor said about his brilliant work in an interview.

After completing the television series in 2013, David commented farewell to his beloved hero touching and his screen death was perceived as the departure of a dear friend and just a wonderful person.

There are many actual historical figures in the filmography of the British actor: Sigmund Freud, Lavrentiy Beria, Gustav Klimt, Edmund of Langley, Napoleon Bonaparte, Thomas Wolsey, as well as biblical figures, Aaron, Brother of Moses), Joab (the commander of King David).

Suchet has an original approach to creativity: he divides a sheet of paper into two parts and writes in one, his similarities with the hero, differences in the other part of the paper. For example, his analogy with Poirot in pedantry and religiosity, as well as in growth and eye color.

David managed to find a worthy companion of his life, his colleague Sheila Ferris, they married on June 31, 1976, after four years of their acquaintance. It was love at first sight for a man and as he claimed later, he had to make a lot of effort to invite his favorite girl on a date.

"I lost my head the minute I saw Sheila. She claims it was mutual but we both fought it like crazy. Love at first sight? We could not accept such banality!" Suchet laughed.

The man, who received BAFTA nominations five times, has two children. In 1981, his son Robert was born, the captain of the Royal Marines in retirement, his daughter of Katherine was born in 1983, who became a physiotherapist.

David enjoys music ( his favorite composers are Telemann, Mozart, Vivaldi), he learn the art of photography and loves water trips to his beloved England.

In general, he considers himself lucky. He was "indecently lucky" not only in his personal life but in general. If there were such an opportunity, he would invite Napoleon Bonaparte and Adolf Hitler, Jesus Christ to his dinner.

The actor is also known for his charity work.

In 2018, Sushet was busy in the TV series Press, which tells about the clash of journalists with the solution of ethical issues, where he became a media baron. David Suchet has a net worth of $5 million.

On November 14, 2018, there was a post on his account on the social network "Twitter," which was aired in the United States, in which there was information about the release of the comedy-drama Clyde Cooper, telling about the crazy day when two geniuses met to create the first hologram.

By the way, his makeup artist, Vanessa White was awarded The RTS Craft & Design Awards for helping the actor in the visual transformation into a "great madman."

From February 5 to April 27, 2019, he participates in the production The Price of Arthur Miller.

He introduces his followers with his photos from family trips and everyday work on Twitter.