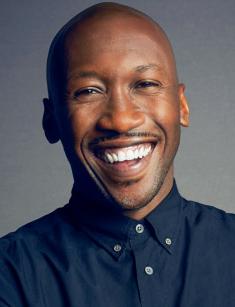 American actor Mahershala Ali began acting in films in the early 2000s, but fame came to him after more than ten years with a role in the Netflix political thriller series House of Cards. And soon he was standing on the stage of The Dolby Theater under the flashlights, giving a touching speech of thanks with an Oscar for Best Supporting Actor clenched in his hands. Ali became the first Muslim actor to receive an Oscar.

Mahershalalhashbaz (the full name of the actor) Gilmore was born on February 16, 1974, in Oakland, California. His mother was an ordained minister, who, in turn, inherited this mission from her mother. His father, an actor, worked in New York after divorce.

The boy was raised a Christian by his mother in Hayward, California. He was even named after Maher-shalal-hash-baz, a biblical prophetic-name child. When his son was nine or ten years old, Ali's mother remarried, but even with the salary of his stepfather and a part-time job as a hairdresser of his mother, the family could hardly make both ends meet. And when his stepfather got fired, the family lived for several years in extreme poverty. The actor recalled his childhood, saying:

"My mom and stepdad were strict. I couldn't date, I couldn't go out. And I was a kid who was never good at just taking no for an answer. I needed to understand why. And sometimes they weren't interested in explaining."

Then Mahershala found comfort in sports, began to play basketball and achieved great success, both because of his height, 6 feet 1, and his remarkable skill. Ali won a basketball scholarship at Saint Mary's College in 1992, but during his studies, he gave up on sports, began to write poetry and engage in creativity, and one day his father's acting genes took over him. At the request of his teacher, the young man played a role in the college play Spunk by George C. Wolfe.

After graduating with a degree in mass communication, Ali spent the summer of 1996 as an apprentice at the California Shakespeare Theater. Then he started working for The Gavin Report, a magazine about new recordings but decided to try to develop as an actor. In 1997 he auditioned and managed to get in New York University's graduate acting program at Tisch School of the Arts.

Here he met his future wife, partly because of whom he experienced a spiritual transformation and changed his religion, deciding to profess the Islamic faith. The guy changed his surname Gilmore to a Muslim one, Ali, which marked a new chapter of his life.

Ali graduated from the University in 2000, and in September 2001, played the part of Dr. Trey Sanders in the first season of an American television crime drama series Crossing Jordan. However, the initial success proved to be changeable. After this part, Mahershala scraped by playing insignificant roles in such television series as CSI: Crime Scene Investigation and NYPD Blue.

In 2003 the film Making Revolution was released, and it was Ali's debut on full screen playing the central character. He started taking part in the filming of this motion picture when he was a graduate at the University.

In the same year, the actor began acting in the television series Threat Matrix, and after the end of the season, he left the project to start working on The 4400, popular at that time. It is a science fiction television series about an investigation into a secret group of 4400 people abducted by aliens. Ali played one of the first 4400s to be shown, a former pilot, Richard Tyler. Mahershala worked on the project for three seasons until 2007.

People began to talk about the dramatic talent of the actor after the premiere of the Oscar-winning movie The Curious Case of Benjamin Button (2008), in which Mahershala played the part of Tizzy Weathers, the mentor of the protagonist Benjamin (Brad Pitt), his first teacher and friend. The movie received thirteen Academy Award nominations and won three, as well as BAFTA, the Golden Globe Award, The Saturn Award, and others. From that moment on, Ali passed into the category of the most popular Hollywood actors.

In 2010, the actor starred in the science fiction action film Predators, playing Mombasa, a death squad soldier in a ruthless war between the people of Earth and aliens. A new major project in the actor's filmography appeared in 2012. It was the crime drama film The Place Beyond the Pines, in which the actor played the beloved of the main character Romina (Eva Mendes). The film had a brilliant cast: Ryan Gosling, Bradley Cooper, Dane DeHaan.

From 2013 to 2016, Ali starred in the television series House of Cards, filmed in the genre of political thriller. Mahershala got the part of Remy Danton, President's Chief of Staff. The series, starring such famous actors as Kevin Spacey and Robin Wright, aired for six seasons on TV with great success.

The following works were just as famous: both parts of The Hunger Games: Mockingjay, in which Ali acted as Boggs, became the highest grossing movies of 2014-2015.

2016 was a year of great luck for the actor. It was marked by the nomination for an Emmy Award for his role in the House of Cards, as well as the release of the movie Moonlight, which received a shower of positive reviews. For touching performance of a role of the drug dealer Juan who turns into a father for the lonely boy in the criminal district of Miami, Ali received an Oscar for Best Supporting Actor, having gone down in history as the first Muslim actor, who won the Academy Award.

In 2018 and 2019, Mahershala pleased his fans with two bright roles, in the biographical comedy-drama Green Book (as Don Shirley, jazz pianist) and Alita: Battle Angel (as Vector).

Mahershala Ali met his future wife while studying at New York University. Amatus-sami-Karim is also an actress, who comes from Chicago. She is a Muslim; her father was an Imam.

The actors did not talk about their relationship and private life, living in informal marriage for a long time. In 2013, they officially became husband and wife. On February 22, 2017, Ali became a father - they had a daughter, Bari Najma Ali.

Now the actor is starring in the third season of anthology crime drama television series True Detective. Ali's character, detective Wayne Hays, and his partner, Roland West (Stephen Dorff) for many years lead an investigation into the mysterious disappearance of children in Ozark, Missouri.

In previous seasons the main characters were played by such stars as Matthew McConaughey and Woody Harrelson. Season three aired in 2019.