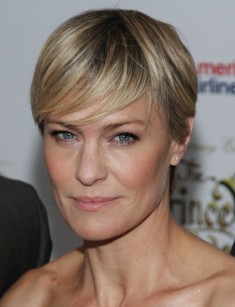 Robin Wright is an American actress. She also has experience as a director on television. The audience knows the Hollywood movie star primarily after starring in the famous TV series "Santa Barbara", the tragicomedy "Forrest Gump" and the political television series "House of Cards." The actress is a laureate of the Golden Globe Award.

Robin Wright was born in Dallas, Texas, but grew up in San Diego, California. Freddie Wright, the father of Robin, was an employee of a pharmaceutical company. Gayle Gaston, the mother of the future celebrity, worked as a sales consultant for the cosmetic company Mary Kay.

Parents moved to California when their daughter was 2 years old. In San Diego, Robin went to La Jolla school. And in Los Angeles, the girl studied at Taft High School. As a schoolgirl, Wright first appeared in front of the camera. First photos of the girl were successful, and Robin began to work as a model.

For almost 6 years, the girl tried herself in the modeling business, working not only with American brands but also with French and Japanese companies. After finishing her career, Robin Wright decided to become an actress.

The beginning actress made her debut on television in the soap opera "The Yellow Rose", in which Robin Wright appeared in 2 series. There, the actress was noticed by Bridget and Jerome Dobson, creators of the cult television series "Santa Barbara". The actress got the role of Kelly Capwell, the daughter of oil tycoon C.C. Capwell. Robin was playing in the film for 4 years, after which she refused to sign a new contract. As a result, Wright was replaced by another actress - Kimberly McArthur. Until now, viewers remember this picture, arguing that it was Robin’s best film. In future, the role in the series will be the main work in the career of the actress.

In 1987, Robin Wright played a girl Buttercup in a fantasy adventure comedy "The Princess Bride," based on the novel by American writer William Goldman, who adapted the book for the script. This film is famous and 25 years later it got on the list of "250 best films", which was compiled by The Internet Movie Database.

But the real popularity came to the actress in 1994, when the tragicomedy "Forrest Gump" was released, where the partner of Robin Wright was the famous actor Tom Hanks. Wright plays Jenny Curran, a girl who, from childhood, loves Forrest. The child with a low IQ has a very big heart.

Robin got positive reviews from critics, although they noted that the character was quite trivial. But the actress showed her acting skills very well. For participation in “Forrest Gump”, Robin Wright received the Golden Globe Award, as well as the Screen Actors Guild of the United States.

Another very notable and recent work in the American filmography was the political series "House of Cards", in which Wright acted not only as an actress but also as a director of the several series of 2 and 3 seasons. It tells about the politician Francis Underwood (Kevin Spacey) and his wife Claire (Robin Wright). The Underwoods become participants in behind-the-scenes political intrigues, and the series presents politics as a game in which rules are often violated.

Another interesting project with Robin Wright was released in 2013. It was a joint French-Israeli fantasy film "The Congress". Robin Wright plays the role of an actress Robin Wright. But there is no autobiography in the film. The picture is based on the novel by Stanisław Lem "The Futurological Congress." The film is full of philosophical, psychological and moral issues.

In 2013, the film "Secret Attraction" also appeared. It received different reviews from critics. Many called the plot and script of the picture rather bold. The famous actress Naomi Watts also appeared in the film.

The actress is slim (the growth of Robin is 168 cm, weight is 60 kg). She has always been in the center of attention. The attractive representative of Hollywood was married not once.

In 1986, Robin Wright married for the first time. Her husband was the actor Dane Witherspoon, with whom she had relations for about 2 years. They met on the set of the series "Santa Barbara". The couple quickly began dating. But this marriage lasted only 2 years, after which Robin and Dane broke up.

In 1989, Robin Wright had relations with the actor Sean Penn. At first, the couple lived in a civil marriage. In 1991, Robin gave birth to their daughter Dylan Francis. The girl was named after Francis Ford Coppola, a close friend of Penn, and his favorite musician Bob Dylan. Two years later, their second child Hopper Jack was born, who received the name in honor of two other friends of the family - Dennis Hopper and Jack Nicholson.

Only in 1996, Sean and Robin had a wedding. In the marriage, Robin gave her husband's surname as the second. The American film actress, even in the credits of the films, appeared under the name of Robin Wright Penn. More than 10 years, this family was considered as ideal in Hollywood. But in 2007, the first quarrels began and even public statements by Sean Penn, who stated that he got tired of his. In 2009, they divorced. Divorce proceedings turned into a whole epic. Sean as well as Robin filed for divorce but later took the documents. So it repeated several times and in July 2010, the court officially terminated the marriage.

For a while, Robin Wright paid attention only to children. Nevertheless, in early 2012, the woman began relations with the actor Ben Foster. 2 years later, their engagement was announced. But in summer 2015, the couple officially broke up.

In 2010, Robin Wright became the face of the French women's clothing line Gerard Darel. Also, the Hollywood film actress is an honorary representative of the American organization "Gordy Foundation", which supports young people who have demonstrated intellectual or creative abilities. Also, the foundation helps teenagers to avoid the danger of early acquaintance with alcohol and drugs.

Robin Wright is a co-founder of two California companies Pour Les Femmes and The SunnyLion. Both organizations spend part of the profits on charity.

In 2017, the famous actress starred in a candid photoshoot for The Edit magazine. Fans saw the celebrity without a bra and in loose shirts on the naked body, as well as in seductive dresses. In addition, the actress told in an interview about the financial injustice that arose during the participation in the series "House of Cards". It is known that Wright demanded the same fee as Kevin Spacey, saying that otherwise she would refuse to participate in the project and tell the public about it.

"I was promised the same fee, and I believed them. But later, it turned out that I was deceived, "Robin Wright said in an interview.

According to the actress, she got the role that is comparable to the character of Kevin Spacey. And it is not fair, because, she performed the same tasks but received less money. As the American actress noted, Francis Underwood is an orator, demagogue and poet, and Claire is his ego behind the back, directing Francis in the political process.

"I think we need to figure this out. Claire and Frank are equal in terms of their power, union and plot. I may not have as many scenes and words as Frank, but Claire does not need words. I believe that they are equal partners," said Wright.

It is known that Robin directed several episodes of the film. According to the actress, she was bored just to star in the film. She wanted to help the actors on their way to success and fame.

The fans of the actress remembered the photo shoot that took place in May 2017, in Cannes. Then Robin Wright appeared in public in bright leopard shoes, combining it with the business look. In this image, the leopard shoes looked harmonious, but the fans compared the American to the lover of extravagant shoes - British Prime Minister Theresa May. The head of the British government can often be found at official events in such shoes or ballet shoes. Users of the "Instagram" and other social networks immediately began to compare the photos of Wright and May, making a kind of "leopard battle".

Wright continues to participate in the shootings. In June 2017, the film with the actress "Wonder Woman" was released, in which the Israeli actress and model Gal Gadot played the main role. And in October of the same year, the premiere of the film "Blade Runner 2049" is planned. 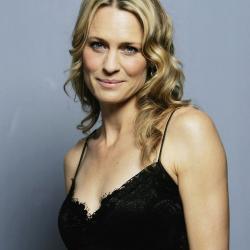