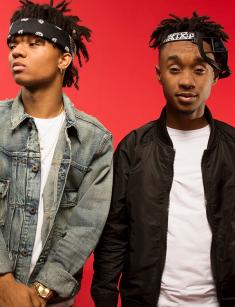 The biography of the group Rae Sremmurd shows the desire of two young guys from a low-income family to develop their creativity. The brothers achieved success at an early age and gained a huge army of fans. The guys proved that if you go to the goal, no matter what, you will come to it.

The history of creation and formation

The history of the group Rae Sremmurd begins with two teenagers who are fond of music since childhood. Brothers Aaquil (Slim Jxmmi) and Khalif Brown (Swae Lee) were born in California, in Inglewood. The father left the children a couple of years after they had been born and they lived with their mother Bernadette Walker and the brother Michael.

The mother of the boys served in the army, in tank troops and she brought up children strictly. The family had to move from place to place because of their mother's work in the military structure. So, they moved to Texas and lived on the territory of the military base.

The guys were in middle school Tupelo (Mississippi). The mother found a husband there and a stepfather was a real dad for kids. Aaquil and Khalif respected him and listened to the advice of their new father. The head of the family sold drugs, to feed the family.

The guys got acquainted with the music in 2005 when the elder brother Khalif learned how to do beats in FL Studio. They just messed around then. The young men were seriously engaged in it in 2010 when they were in high school.

Brothers founded the group Dem Outta ST8 Boyz and uploaded the first dance clip of the song "Party Animal" on "YouTube." The sound was great and the quality of the shooting left much to be desired. However, the students gained local fame and were popular in the district.

When the stepfather divorced the mother of the boys, they began to have a nightlife and had parties in an abandoned house. Aaquil and Khalif paid only for the light and there was not any other convenience. The building was unheated, the walls were blown, and there was no hot water just cold one. Neither mother nor others liked this way of life. But the boys did not care; they went their own way.

The guys met P-Nasty at one of the night parties, a cousin of their stepfather. He was a member of the production team EarDrummers; Mike WiLL Made-It was a director. The brothers raised money and went to conquer Atlanta to meet him. They settled in the basement of the house P-Nasty and began to record tracks there. The music was raw and unintelligible. The desperate boys went back to Mississippi.

Now teenagers lived in their own home. When Aaquil worked at the factory, Khalif played music and had parties. P-Nasty again drew attention to the guys, listening to their song "I Do." He invited the guys back to Atlanta to meet Mike Will. The guys settled in the basement of the head of EarDrummers this time and tried their best to make high-quality music.

For a while, Mike did not notice the potential in the work of the brothers but he realized soon that the guys have a vision that he likes and began to make guys popular. After the first debut concert as an opening act for the rapper Future, the musicians called themselves Rae Sremmurd. The name is the reverse form of EarDrummers. Since then, the brothers' life is changed.

The 2014 year for the group Rae Sremmurd was a breakthrough. The boys record the track "No Flex Zone" working for a record label, EarDrummers. In August, the video is released on this song. The video for the track "No Type" appears on the band's YouTube channel a month later, in September. It has gained more than 700 million views for four years.

These two songs were main from their first album "SremmLife." Music journalists responded positively to the work of Rae Sremmurd, noting the energy of the guys. Also, Rae Sremmurd was certified platinum by the RIAA for the number of sold copies.

Rae Sremmurd in 2014 was nominated for the Billboard Music Award and BET Awards in the categories of the best rap artists, the best group and the best new artists. The track "Throw Sum Mo," recorded with Nicki Minaj and Young Thug, won in the category of "Coca-Cola Viewers` Choice Award" and received the award for the BET Awards.

In 2015, the group recorded the song "This Could Be Us" and shot a video during a trip to South Africa. Aaquil and Khalif went on tour with the rap artist Nicki Minaj the same year. The guys coped with the opening of the audience and soon went to the debut world tour "ScremmLife Tour." Aaquil and Khalif visited Oceania and Europe.

In 2016, the brothers released their second album "SremmLife 2". The main hit of the collection was the song "Black Beatles," recorded together with the popular rapper Gucci Mane. The video was released on September 22. In August of this year, the disc took an honorable 5th place in the Billboard 200. And the composition "Black Beatles" took the 1's place in the Billboard Hot 100 in November.

Also in 2016, the brothers founded their label SremmLife Crew Records. The label includes the rappers from Mississippi: Impxct, Riff 3x, Bobo Swae. In March 2016, the guys made the first official release "Trail Mix."

2018 came out productive for both Rae Sremmurd and each of the brothers. They recorded the album "Sremm Life 3", which consists of three assemblies of SR3MM. Swae Lee (Khalif) released a solo album, "Swaecation" and his brother Slim Jxmmi (Aaquil) recorded "Jxmtroduction." The clip "Watching Me" was released in November, was filmed jointly with Mike WiLL Made-It and Kodak Black.

The brothers actively post photos on "Instagram." You can see that the guys work hard on their music. Each of them recorded their Christmas track. Swae Lee introduced the song "Christmas At Swae`s", Slim Jxmmi released "Nothing For Christmas." Rae Sremmurd is an American hip hop duo and they have a net worth of $12 million.

The duet of brothers is not going to stop there and the guys will continue to engage in creative development. They already released joint tracks with XXXTentacion, Lil Pump, Post Malone, Kodak Black. Perhaps the musicians will collaborate with more famous artists and labels.