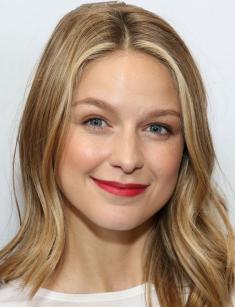 Melissa Benoist debuted on the big screen in 2008 when she appeared in the melodrama Tennessee with Mariah Carey. However, small projects and popular series brought her real fame. In 2012-2014, Melissa participated in a youth project Glee; since 2015, she has been working on the series Supergirl and playing the main character. It was Supergirl who gave the actress glory, love of millions, and money.

Melissa Marie Benoist was born on October 4, 1988, in Houston, Texas. The girl’s father, Jim Benoist, worked as a doctor; the mother, Julie, kept the house. The woman has French, English, German, and Scottish roots. Melissa has two sisters: a writer Jessica and an environmental expert Kristina. Besides, Benoist has five half-siblings from the father’s side.

The child showed her talent early. When Melissa turned three, the parents took her to dancing classes where she studied both classical ballet and modern tap-dancing. At the age of four, young Benoist played in a church performance staged by her aunt.

As a teenager, Melissa and the Academy of Theatre Arts participated in children’s plays at Disneyland. Besides, she attended a musical theater school in Littleton, Colorado.

The would-be star went to Arapahoe High School and graduated in 2007. She decided to follow her dream and moved to New York. In 2011, Benoist graduated from Marymount Manhattan College as a Bachelor of Fine Arts.

Melissa took part in various theater performances in Littleton: Cinderella, Bye Bye Birdie, Evita. Some of them were musicals: the young woman was pretty good at singing. In 2006, The Denver Post called Benoist one of the Can't Miss Kids in the state.

The joy from the successful start did not last long, though: for the next two years, the actress was auditioning, playing in the theater, and sending her portfolio to various agencies, yet no invitations followed. Finally, in 2010, Benoist appeared in several episodes of the popular TV series Law & Order; soon, she participated in Blue Bloods, The Good Wife, and Homeland.

Little by little, Melissa was mastering her skills. 2012 brought the first results: sweet-voiced and hot Benoist was a gemstone for the producers of the series Glee; by that moment, three successful seasons had come out.

It took pretty much pain to get the role: Melissa had five auditions in New York and performed five various songs; two screen tests in California followed. Finally, the young woman received the part of the playful daredevil Marley Rose, the member of New Directions, and appeared in four seasons (35 episodes).

The TV success brought the actress movie roles. In 2014, she played one of the main characters in Damien Chazelle’s psychological drama Whiplash. Melissa’s character, Nicole, is a girlfriend of Andrew Neiman, a talented musician who is going through a conflict with his teacher and personal tragedy: the young man is unable to play after a car crash. Critics’ reviews were favorable; the project gained many awards: Sundance Film Festival Grand Jury Prize, three BAFTAs, and three Academy Awards.

The next year, the actress expanded her filmography and appeared in the melodrama The Longest Ride and the musical Danny Collins with Al Pacino, Annette Bening, and Jennifer Garner.

Once again, television brought the lead role: in 2015, CBS channel launched the series about Superman’s cousin, Supergirl. Producers chose Melissa; her height (5.68 feet or 173 cm.) helped her. Kara Zor-El known as Supergirl was born in Krypton; the whim of fate brought her to Earth where she gained her superpowers and turned into the mighty figure.

Since that time, the artist’s schedule has been hectic: in 2016-2017, Melissa combined Supergirl with the spin-off projects, The Flash with Grant Gustin, Arrow, and Legends of Tomorrow. More than that, Benoist finds the opportunity to work on full-length movies.

In 2016, the action drama Patriots Day was released. It is the story about the events of 2013: on April 15, the Tsarnaev brothers detonated two bombs when the Boston Marathon was held. Melissa played Tamerlan Tsarnaev’s wife, Katherine Russell.

2017 was marked with the thriller Billy Boy; Melissa’s then husband, Blake Jenner, created the script. The spouses also organized a fund-raising campaign for the project.

The same year, Melissa appeared in the movie Sun Dogs. The plot is quite unusual: Ned, a person with intellectual disabilities, makes many attempts to become a marine. As soon as he faces another failure, the young man and his accomplice Tally (Melissa Benoist) organize an anti-terrorist group.

In 2012, Melissa met her future husband Blake Jenner who played Ryder Lynn. The couple did not keep secret their relationship from fans. They engaged in 2013 and married two years later.

In 2014, the actress’s name was among those who suffered from the leaked Fappening nude photos. Some hackers tried to made use of the celebrities’ sexy and naked pictures; a big scandal happened.

By the end of 2016, the actress announced she divorced Jenner due to “irreconcilable differences”. No children were born in this family.

Perhaps, Melissa had already been in love with a new man. In 2017, it was revealed that Benoist was dating her colleague Chris Wood who also appeared in the series Supergirl and played the character’s boyfriend, Mon-El.

The fourth season of Supergirl was premiered on October 14, 2018. Producers are going to continue the project, and the actress is going to be pretty busy. She might participate in the movie My Oxford Year based on Julia Whelan’s novel. There have been many talks about the project since 2015, yet it has not been announced yet.

There are numerous bright pictures on Melissa’s Instagram page: the actress does not feel awkward to appear without makeup or make faces to express her cheerful spirits.

“I have a very optimistic view of my future right now. I'm very excited to see where it goes, but I try not to make plans just because I know how unpredictable life can be”, the artist told journalists in one of her interviews.