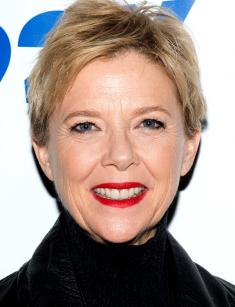 60-year-old American actress Annette Bening is charming, resilient and hardworking as if she was young. During her long acting career, the actress has received four Academy Award nominations and won the Golden Globe Award for Best Actress twice.

Annette Carol Bening was born on May 29, 1958, in the provincial American city of Topeka, Kansas, in a large family. Her parents, insurance agent Arnett Grant and housewife Shirley Ashley, a church singer, were not connected with the world of red carpet and spotlights. Annette has three siblings: Jane, Bradley, Byron.

Shirley Ashley's passion for music was not in vain. From an early age, Annette showed creative inclinations, having inherited a sweet voice from her mother. The girl was offered to play in the school musical The Sound of Music. In 1975, she graduated from Patrick Henry High School, and then entered the theatre arts department of San Francisco State University.

During her studies, the girl gave her all to the theater. She dreamed of becoming a stage actress, so she took part in many productions. In the mid-80s, Bening played in the plays The Cherry Orchard, Pygmalion, and Coastal Disturbances.

After her theater success, Annette began to try her hand at television and movies. She made her debut in the 1986 TV drama Manhunt for Claude Dallas. It was followed by supporting roles in the TV series Wiseguy and the film Miami Vice. In 1988, the actress first appeared in a full-length movie, the comedy The Great Outdoors directed by Howard Deutch.

The following year, Annette got the first prominent role in her filmography. She played an insidious aristocrat named Marquise de Merteuil in the historical drama Valmont directed by Miloš Forman. The actress’s partner was the handsome English actor, Colin Firth. The young actress showed brilliant acting, and the Chicago Film Critics Association nominated her for Most Promising Actress.

Bening rose to national prominence in the 90s, and this decade was successful for her acting career. She played a prominent role together with Anjelica Huston and John Cusack in the crime drama The Grifters, which made Annette famous and helped to attract the attention of eminent directors. The movie received four Academy Award nominations.

Annette Bening needed to prove her ability to play any role, and the young woman fulfilled this task. She portrayed absolutely different characters, a caring and loving wife of Harrison Ford’s hero in Regarding Henry, femme fatale who ruined the life of her lover in the crime drama Bugsy, and a cute lobbyist whom the US president (Michael Douglas) could not resist in The American President.

Bening was nominated for the Academy Award and Golden Globe Award for the role of the protagonist's (Kevin Spacey) unfaithful wife in the cult film American Beauty of the novice director, Sam Mendes. In total, the drama won 5 Awards and became the Best Film of 2000.

In the 2000s, the actress did not play very prominent roles. She returned to television projects in which she had not appeared for almost ten years. Annette participated in the animated series Liberty's Kids and the drama Mrs. Harris about the teacher, who was accused of killing her lover. Directors rarely invited Annette to play in full-length movies, but she always got prominent roles and managed to show incredible professionalism.

In 2003, the actress starred in Kevin Costner’s action movie Open Range. The following year, she appeared in the adaptation of the classic novel "Theater" by W. Somerset Maugham, alongside Jeremy Irons and Shaun Evans, and received the Golden Globe Award for the role of Julia Lambert and one more Academy Award nomination. But Hilary Swank, who performed the part in the sports drama Million Dollar Baby, snatched the prize from under her nose again.

Then Bening began to play in one film within one or two years, but she always portrayed one of the title characters and was highly appreciated by critics and viewers. In 2008, the actress starred in the comedy-drama The Women, which featured a lot of Hollywood beauties: Meg Ryan, Carrie Fisher, Eva Mendes, Bette Midler. Annette and Naomi Watts starred in the next Spanish-American melodrama Mother and Child.

In 2010, Bening played Dr. Nicole, the wife of an unfaithful spouse (Julianne Moore), in the LGBT drama The Kids Are All Right. Annette won her second Golden Globe Award, the Dorian Award and was nominated for the Academy Award again for her brilliant portraying of a lesbian.

In 2016, Bening starred in the crime series American Crime Story directed by Ryan Murphy, returning to the television screen, and the drama 20th Century Women. The last work earned her the eighth Golden Globe nomination for Best Actress. Nowadays the actress is not as in demand as she was in the 90s and 2000s, but Annette is not worried. She spends her free time with her family, practices yoga and goes to church.

The personal life of the actress has always been rich. In 1984 Annette Bening married renowned choreographer J. Steven White. Their marriage lasted only seven years, after which the couple filed for a divorce.

In 1991, the actress began shooting in the crime drama Bugsy, in which the famous gangster (Warren Beatty) fell in love with her heroine. The passionate on-screen relationship turned into a real one. One year later, despite a 22-year age gap, the lovers celebrated a wedding. The woman said about it in an interview:

"Undoubtedly, Beatty is a man of a different generation, and he's also too loose. However, there are moments in every marriage when it’s impossible not to exclaim, “Lord, how different we are!”. It is all right. I’ve heard that feelings that draw us to other people at the beginning, subsequently affect their separation. That is why I remind myself: “Long live variety!”.

When they celebrated the wedding, the couple already had a daughter named Kathlyn Elizabeth. In total, the spouses have four children: Benjamin MacLean (1997), Isabel Ira (1997) and Ella Corinne (2000).

When the oldest daughter turned 18, she underwent a sex change and changed her name to Stephen Ira. At first, the girl’s choice shocked Annette and her husband, but over time, they put up with it.

In 2019, several new movies with the participation of the actress will be released. These are the drama The Report directed by Scott Z. Burns, the crime drama Georgetown, and the fantasy action movie Captain Marvel with Brie Larson in the lead role.

Bening does not use Instagram, preferring the real world to the virtual one. But there are a lot of pictures of professional photo shoots and red carpet awards in which the actress looks amazing. The paparazzi often take pictures of Annette. The photographs of her rest, in which she walks along the beach wearing a bikini, are amazing. She has a great figure for her age (her height is 5.67 ft. (173 cm), and the weight is 127.86 lbs. (58 kg).

Annette Bening has a net worth of $48 million.