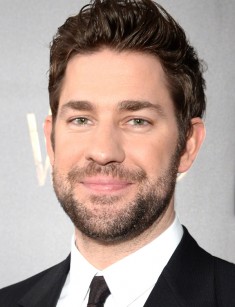 The role of sales representative Jim Halpert in the comedy series The Office made American actor John Krasinski very famous. The sitcom, which was broadcast on the BBC channel, won 21 awards, received 63 nominations for prestigious film awards and glorified the actors and creators of the project.

The comedies Away We Go and Leatherheads, the melodramas Something Borrowed and It's Complicated, the drama Promised Land enriched the filmography of the actor. Krasinski’s works as a director and screenwriter helped him to reach the Hollywood stardom.

The actor was born in Massachusetts in October 1979. Krasinski lived in Newton as a child and teenager. His mother was of Irish and American descent. The father had American and Polish ancestry and worked as a general practitioner of the city hospital.

The future actor, together with his older brothers Paul and Kevin, were raised as Roman Catholics, but his parents encouraged the creative freedom and development of the sons.

The future star of The Office made his stage debut at school. When he was in a sixth grade, John Krasinski played a millionaire, Oliver Warbucks, in a Broadway musical. Next time, the young American performed on the stage in a satirical production, which script was written by a graduate student of the college where Krasinski studied. In a few years, John and the author of the play, Benjamin Novak, met on the set of the famous series The Office.

In 1997, the young man graduated from college. Shortly before graduation, John Krasinski had studied in Costa Rica for a semester, where he tried his hand at teaching English as a foreign language. After graduation, Krasinski enrolled in Brown University, where he studied theatre arts and graduated with the honors thesis.

At Brown University, the student played in a junior basketball team and achieved success because he became an assistant coach. But his interest in theater and cinema was stronger. John entered the National Theater Institute in Connecticut, studied acting at American and English theater centers.

Having earned an excellent acting experience, John Krasinski moved to the Big Apple, where the actor's career development was much better than in Connecticut. The novice artist attended auditions, shot in commercials, and participated in television shows. Since there was not enough money to live in expensive New York City, Krasinski worked as a waiter.

John began his acting career in 2000 when he played a radio operator in the historical drama Thirteen Days and an assistant judge in the comedy melodrama State and Main. The roles in the movies did not make the actor famous, but he was lucky to work on the same set with Kevin Costner, Alec Baldwin, Sarah Jessica Parker.

2004 was lavish with prominent roles. John Krasinski played Jace Gleesing in the legal drama Law & Order: Criminal Intent, the second spin-off of the franchise. The actor got a supporting role in Bill Condon’s biographical drama Kinsey. The film was nominated for the Oscar, Golden Globe and Satellite Awards. On the Rotten Tomatoes website, Kinsey’s rating has reached 90%, and his actors have become the favorites of millions of viewers.

The third project of 2004 was Tim Story’s action movie Taxi with Jimmy Fallon and Queen Latifah, and the actor got a bit part there. John Krasinski became very famous in 2005, and the American was showered with offers.

He played Corporal Harrigan in the war drama Jarhead directed by Sam Mendes, Lyle Davis in the police procedure CSI: Crime Scene Investigation, and a bit part in the thriller Without a Trace.

Krasinski’s main success was the series The Office. Time magazine included Greg Daniels’s ridiculous parody, which depicts the everyday lives of office employees in Paper Company, in the top 10 best TV series of 2007. The year before, the project won an Emmy Award. John Krasinski was lucky to play a leading role in The Office. Besides him, Steve Carell, Rainn Wilson, and Jenna Fischer portrayed the title characters.

The project was very successful, and they shot nine seasons. The series was broadcast until 2013. For eight years Krasinski appeared on the screen as office employee Jim Halpert and became the favorite actor of millions of people. While shooting in the project, John Krasinski became more and more popular and in demand, so during these years he also appeared in a dozen movies, which became the event of the year.

However, Krasinski's best roles are comedic ones. The actor became even more famous after appearing in the comedies Smiley Face directed by Gregg Araki, License to Wed (John Krasinski and Robin Williams played the leading roles) and It's Complicated. In the last film, the American appeared alongside Alec Baldwin and Meryl Streep.

The actor has tried his hand at directing and producing. In 2009, the comedy film Brief Interviews with Hideous Men premiered. But his first steps in directing was the series The Office, where Krasinski shot several episodes.

In 2015, viewers saw their favorite actor in the comedy-drama Aloha, where he portrayed brilliant John "Woody" Woodside. The following year, Krasinski played a leading role in the war thriller 13 Hours: The Secret Soldiers of Benghazi. The movie was filmed in Malta. It received mixed reviews, but the American played the role of Jack Silva brilliantly.

The Hollywood star was listed as one of People Magazine’s Sexiest Men Alive in 2006. John Krasinski has millions of female fans, but his heart belongs to a woman. In 2008, he began dating red-haired beautiful Emily Blunt. In the summer of 2009, the couple announced their engagement.

The stars celebrated their wedding in July 2010 in Italy. They do not like to tell about personal life, so fans were surprised when they found out about the birth of a daughter, Hazel Grace, in February 2014.

At the beginning of 2016, Emily finally told annoying journalists about her second pregnancy. In July, she gave birth to a second daughter, Violet. The girl was born on US Independence Day, and John Krasinski wrote about it on his Twitter page.

The actor posts new photos on social networks, where he is depicted together with his family. Subscribers and fans can follow the news about the life of their favorite actor on Instagram.

Two projects with the actor and director have been announced to premiere in 2018. The series Jack Ryan directed by Carlton Cuse and Graham Roland is based on the novels by American writer Tom Clancy, who worked in the genre of technically detailed espionage and alternative history.

Ryan is the fifth actor to portray the character after Alec Baldwin, Harrison Ford, Ben Affleck, and Chris Pine. He will tell his story about the titular CIA analyst, who solves a string of dubious bank transfers of terrorists who are preparing an attack on America and allies.

The second project, which has been announced to premiere in the spring of 2018, is a fantasy thriller A Quiet Place in which Krasinski and his wife Emily Blunt will play the title characters. John works as an actor and a film director of this film. It tells the story of a family who tries to avoid the lethal risk living on a quiet farm and communicating only in sign language. 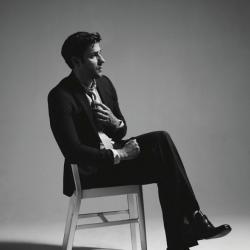