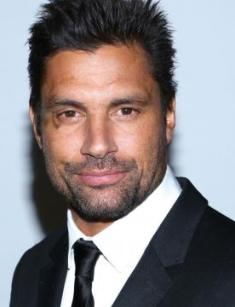 A brutal handsome man with an athletic figure and magnetic brown eyes. This is a description of this actor's character, Crixus, gladiator, and military leader of Capua in the Hollywood television series Spartacus. This central role brought Manu Bennett world fame and an army of fans all over the globe. But the actor's life could have turned out quite differently.

Jonathan Manu Bennett was born in the fall of 1969 in Rotorua, one of the largest cities in New Zealand. When Manu was three months old, his parents moved to Australia, believing that Sydney offered more opportunities for their child.

Spanish and Scottish blood flows in the veins of Manu thanks to his mother and the Indian-Irish blood of his father. But most importantly, Māori Indians were on the paternal side of the future Hollywood star. Hence the name Manu, which was given to the son by his parents. They were creative people. His father worked as an entertainer and was famous for his beautiful vocals, and his mother made a good modeling career, presenting lingerie.

Besides his father, Bennett's family had one more musician and singer, Manu's uncle. For many years he worked as a pianist in the group of the legendary Elvis Presley.

In school, Manu Bennett studied hard, and after graduation, the young man got a scholarship in one of New York universities. But the boy wanted to break free and travel. Manu decided to follow his dreams and did precisely as he wished. Bennett traveled across Europe and the United States, but in 1986, when Manu was 17, he enrolled in a College that was predominantly attended by Māori boys. Here the young man was fond of Rugby and received good "life education." In an interview, the actor recalled College as an analog of prison, in which survival required excellent fighting skills and success in Rugby.

After receiving his diploma, Manu returned to Australia again. As an excellent Rugby player, the guy was invited to the youth team. But in these years, the young man decided to follow in his father's footsteps. Manu Bennett got engaged in dancing and playing the piano. Manu also went on stage for the first time in his life and dived deep into acting. From that time, Manu Bennett couldn't dream of anything besides building a career in the movie industry.

Soon Manu Bennett moved to Los Angeles, closer to the dream factory, having high hopes for a bright future. This decision did not come easy for him. Manu got the guts for such a big step forward after a terrible accident. Manu Bennett got into a car accident with his mother and brother. He was the only survivor. After more than ten days in a coma, the guy realized that life was fleeting. This meant that he needed to have as an exciting and adventurous life as possible, doing only what he liked.

Manu Bennett became a student of the famous Lee Strasberg Theater and Film Institute – one of the world's best acting schools. Within the walls of the institution, such stars as Al Pacino, Robert De Niro, Dustin Hoffman, Steve Buscemi, and Angelina Jolie were discovered.

The cinematic biography of Manu Bennett developed slowly. The young man returned to Australia and in 1993, appeared in the youth movie Paradise Beach. The project did not enjoy success and became known only in Australia. But the series turned out to be the right launching pad for practical skills of acting.

After working on this project, the young actor was invited to other Australian series, such as Water Rats, All Saints, and Beastmaster.

The first significant role went to Manu in 1999. The guy was offered to play in a low-budget Japanese movie Tomoko. But Bennett's partner on the set was famous actress Rumiko Koyanagi, who had won an Emmy and was already a professional at the time of filming this motion picture.

After this movie, the bright, handsome man, in whose veins flows Indian Māori blood, got invited to star in Hollywood projects, such as Xena: Warrior Princess. The series was released in 2000 and was broadcast around the whole world. Viewers first noticed Bennett in the character of the Roman Emperor Marc Antony.

The actor managed to demonstrate his dancing skills in the movie Lantana, in which Manu successfully played a teacher of a passionate dance, salsa.

Then there was another lull in this New Zealander's career. For several years, Bennett starred in soap operas back home.

The actor was able to return to Hollywood in 2006. The actor was offered supporting roles in the acclaimed projects The Marine, 30 Days of Night, and The Condemned.

In 2010, Manu Bennett managed to become a real Hollywood star, as he always wanted. The mega-popular historical drama series Sparactus was released on the big screen. Here Manu Bennett appeared in the character of the brilliant and brutal Crixus, Gladiator, and leader of the slaves during the uprising of Spartacus. The project was rated "For Mature Audience": the multi-part story is intended for viewing by adult viewers. The picture is replete with scenes of cruelty and naturalism, not to mention that it is oversaturated with profanity.

Nevertheless, the project was a resounding success, and the creators immediately began shooting new seasons. In 2011, the creators released the prequel, and in 2013 and 2013, the continuation of the famous story. The sequels also featured Manu Bennett as Crixus.

At the same time, the actor starred in the feature movie Sinbad and The Minotaur. Manu got into the character of a brave Navigator, who went for treasures. But on the way, the hero met a monster-Minotaur, living in the maze of captain Minos.

Another Hollywood series, which added to the actor's popularity, was the project Arrow, where the admirers saw their favorite actor in the role of Slade Wilson / Deathstroke.

At first, Benett's character was a friend and mentor of the Arrow, and then started to hate the protagonist and became his worst enemy.

The New Zealander seemed to have reached a peak of popularity he had never dreamed of. But in 2012, Bennett's countryman Peter Jackson invited the actor to the blockbuster trilogy The Hobbit. First, the spectators saw Manu in the movie The Hobbit: An Unexpected Journey, and then in the other parts of the well-known project. However, it is almost impossible to recognize Bennett in the makeup of the leader of the Orcs, Azog the Defiler.

The process of getting into this character was interesting for Manu. Many noted that the hero's face was scarred, characteristic of the Māori tribe. A fun fact: during the filming of the first part, Manu Bennett never crossed paths on the set with actor Richard Armitage, the performer of the role of Thorin. And this is despite the filmed scene with an armed confrontation. They met just before the premiere of the movie.

Later, the actor admitted that he gave this warg the nickname Daisy. After that, the Network was overwhelmed by a wave of fan-art. People also made up fanfiction that described how the friendship between White Warg and Azog the Defiler began.

In 2016, new movies were released on the screens, in which fans of this New Zealand star saw their favorite in all his glory. These were Manu Benett’s roles in the pictures Beta Test and The Shannara Chronicles.

The latest project was a fantasy series about the journey of three young people seeking to protect the world from the invasion of demons. Allanon, The Warlock Lord, whose role went to Manu Bennett, helps his friends on their arduous journey.

On this subject, the Hollywood star prefers to remain silent. It is known that the handsome actor has an army of fans, but Manu Bennett's personal life is connected with only one woman, an Israeli socialite named Karin Horen.

The couple has three daughters. The girls' names are Pania, Huia, and Mokoia Bennett. The only thing that has marred the lives of Manu and Karin is the illness of his wife. At 26, Horen was diagnosed with breast cancer. After intensive treatment, the disease receded but returned 14 years later. The family staunchly struggles with the terrible illness and hopes for recovery.

Like other Hollywood stars, Manu Bennett has an officially verified account on Instagram. The actor shares personal photos and pictures from events with his followers. In 2019, Manu Bennett visited Comic-Con.

Manu Bennett has a net worth of $1.5 million.

In January 2017, Manu Bennett appeared in the leading role in the science fiction movie Death Race 2050. The plot of the movie revolves around the annual American show Death Race, actively advertised by the President. Crews, including the driver and Navigator, must cross the U.S. faster than others and score more points. Points are given for pedestrians that get hit-10 points for an adult, 20 for a child, and 50 for elderly citizens.

According to rumors, currently, in Hollywood, there is a shooting of a movie directed by Rupert Wainwright Shadows From the Sky. Apparently, one of the critical roles went to Manu Bennett. Sean Bean, John Rhys-Davies, Talia Shire, and others became the actor's colleagues on set.

In January 2018, it was announced that the multi-part movie The Shannara Chronicles was closed after the second season.