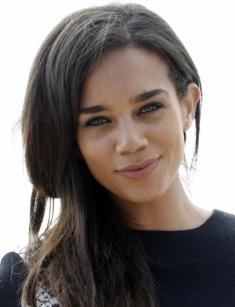 Hannah John-Kamen is a rising Hollywood star. Box office films follow after another in the creative biography of the artist. Today, the girl is completely involved in her career, not distracted by other things. The actress pushed her personal life into the background.

The young Hollywood star Hannah John-Kamen was born in the autumn of 1989 in East Yorkshire, in the town of Anlaby. Hannah has mixed Nigerian and Norwegian blood in her veins, that led to the exotic appearance of the girl. She does not have any artists in her family. Her father is a native of Nigeria, worked as a forensic psychologist and Hannah's mother is a Norwegian mannequin.

Hannah studied in elementary school in Kirk Ella and she received her secondary education at Hull Collegiate School.

Hannah's artistry manifested itself her early age. Her bright and memorable appearance together with the discovered talents led her to the National Youth Theatre in London, where she improved her skills for several years. In 2012, Hannah John-Kamen received her acting education, graduating from the Central School of Speech and Drama.

During her studies at the Central School of Speech and Drama, John-Kamen voiced the popular video game "Dark Souls" and starred in a small role of the series Misfits. Her debut was successful. Hannah was noticed. She is removed regularly from that time. In 2009 she got an offer to play another small role in the TV series Whitechapel. These projects were released from 2009 to 2013.

And in 2011, the cinematic biography of Hannah John-Kamen was enriched by several other notable projects. These series are Black Mirror, Death in Paradise and The Hour.

The actress appeared in a minor role in the second episode of the first season, entitled "Fifteen Million Merits" in the movie Black Mirror. The universe of the series is a parody of entertainment shows. Observers called the episode an interesting and wonderful example for dystopia.

A breakthrough in the career of the actress happened in last years. The audience enjoyed watching the movies The Tunnel, Happy Valley and Killjoys. The named series, especially the latter, turned the young actress into a star.

Killjoys is the tenth serial Canadian adventure film of Michelle Lovretta, shot in the genre of space fiction. The film premiered in 2015. It was decided to shoot the 2nd season of the popular project the same year. In addition to Hannah John-Kamen, the tape starred popular actors Aaron Ashmore, Luke Macfarlane, Thom Allison.

The British artist managed to consolidate her success, starring in a fantastic action movie Star Wars: The Force Awakens of J.J. Abrams, this film received more than $2 billion in the world box office. The project was in 5 nominations for the Oscar.

In 2016, it was known that Hannah John-Kamen would appear in Steven Allan Spielberg's film, which he will shoot based on the bestseller Ready Player One of Ernest Cline. In addition to Hannah, there will be Tye Sheridan, Olivia Cooke, Ben Mendelsohn and other Hollywood actors.

She lit up in two episodes of the cult Saga Game of Thrones in the role of Ornela the same year.

Then the actress was again involved in the project Black Mirror in the second series of the third season, which was called "Playtest." The actress played the main female role this time.

The career of a young British actress develops rapidly. She has a shooting schedule for the months ahead. But the personal life of Hannah John-Kamen is still in the background. We don't know anything about her. Although it is difficult to imagine that such a bright beautiful girl does not have her admirers.

The actress is a fan of dancing. She is engaged in ballet, cabaret, jazz dance, salsa and tap dancing. She also plays the piano.

Unlike star fellows, the actress does not lead her microblog on "Instagram." But she often shares her records with her fans on "Twitter." There are also photos of a celebrity.

As it was expected, the audience saw a young star in the fantastic film Ready Player One in March 2018. She played the role of the head of IOI operations in the physical world of F'Nale Zandor. Hannah John-Kamen has a net worth of $4 million.

A little earlier, Hannah appeared in the long-awaited film Tomb Raider about the adventures of Lara Croft. Her colleagues on the set were Alicia Vikander, Dominic West, Walton Goggins and others.

The plot of the film is built around Lara Croft, who goes in search of her missing father. The girl will have to use all her skills and strength to cope with the difficulties.

Hannah played the role of Sophie.

Creators looked through applicants for the role of a Ghost about a month before their choice fell on John-Kamen.

Ant-Man will go on a dangerous mission and the Wasp will help him in the movie. Paul Rudd and Evangeline Lilly returned to their characters.