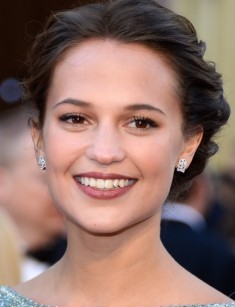 Alicia Amanda Vikander is a movie actress, model and a dancer of Swedish origin, a winner of the Academic Awards, an owner of Berlin International Film Festival Awards, an actress of the leading roles in the movies "The Danish Girl", "Tulip Fever". Alicia Vikander is an actress who replaced Angelina Jolie in the adventure movie about Lara Kroft.

Alicia was born on the 3rd of October, 1988 in Swedish town Gothenburg. She was born in a family of many children of the actress of the local drama theatre Maria Fahl Vikander and a psychiatrist Svante Vikander. Except for Alicia, there were 5 more brothers and sisters from her father's first marriage. Her parents' relations came to an end when the girl turned six months. After the divorce of her parents, Alicia left with her mother what didn't prevent the girl from visiting her father's family and relatives regularly.

Since childhood, Alicia Amanda demonstrated her considerable artistic abilities what was at once noted by her mother Maria Fahl Vikander. Her daughter was very flexible and danced well, she possessed a great voice and a perfect pitch. That's why Alicia's parents did all the possible to develop her skills. A girl attended music and dramatic art classes, and also took vocal lessons. Moreover, during 9 years she had been training in ballet dancing in the ballet school of Gothenburg.

In 2001 13-year Alicia Amanda had her debut on TV and on the stage. Alicia Vikander began her movie career with her role in drama series "Second Avenue".

What refers to the theater, a girl acted in a couple of musicals, which were performed at the stage of Gothenburg opera house. In 2003 a girl decided to enter the Theatrical University but unfortunately, she didn't score the required points. After that Alicia chose a profession of the lawyer but soon she understood that it was not her field.

At the age of 16 Vikander continued to improve her dancing skills at the Royal Ballet School where she stayed for three years. Because of the work-related trauma and her desire to become an actress Alicia left ballet and started to attend movie auditions.

At 19 Alicia was invited to act in various projects. In 2007 it was a Swedish crime series about the routine of the police-station "Höök" which came on the screen during 2 seasons. Young actress appeared in this series as the character of Catharine. The same year Vikander took part in two short-length movies - "Darkness of Truth" and "The Rain" though they didn’t bring Alicia much publicity.

The year 2008 was more prosperous in successful roles for Alicia Vikander. One of them was her role in the drama series "Second Avenue" in which she played the major character of Jossan. This series was on the screen of Central Swedish Television during three seasons and gained a National Award in nomination for "Outstanding series of the year". Alicia again appeared on the big screen having acted in two short movies "My Name is Love" and "Susan's Longing".

In 2010 Alicia Vikander’s career kept getting better and better. A 22-year actress played her second remarkable role in the movie "To Something Beautiful" directed by Lisa Langseth for which Alicia got Stockholms Film Festival Awards. The character of Alicia lives with her boyfriend in a poor neighborhood and leads a boring average life until she hears Mozart's "Requiem" which impresses a young girl so much that she makes up her mind to change her life radically. She gets a job at the concert hall and develops herself. This picture was met very positively by critics and the audience and everybody marked a splendid debut of the young actress. Vikander was recognized as a rising star.

In 2011 the movie "The Crown Jewels" by Swedish director Ella Lemhagen was released. This picture was met with applause and was awarded at Berlin Film Festival. Alicia's character of Fragancia, who was falsely accused of an attempted murder brought actress out of the shadows and provided her popularity in the movie industry.

This picture was followed by another successful project – a drama "A Royal Affair" for which actress learned the Danish language. The plot of this historical drama directed by Nicolaj Arcel was based on the novel "Princess of the Blood" of a writer and scriptwriter Bodil Steensen-Leth. Alicia got the role of a young Queen Caroline Matilda of Great Britain. European actors Mads Mikkelsen and Mikkel Følsgaard who performed the roles of a court physician Johann Friedrich Struensee – Danish educator and a mentally ill King Christian VII of Denmark correspondently became Alicia’s partners on the movie set.

The project was released in 2012 and received awards at Berlin Film Festival, got nominations for Academic Awards and Golden Globe Awards. In costumed movies, fragile and delicate Alicia Vikander, (whose height is not tall – 166 cm and she weighs 52 kilos), looked very natural, what was noted a number of times by critics and by her fans too.

Soon Alicia got an invitation to play in the British screen-adaptation of the novel written by Leo Tolstoy "Anna Karenina". An ambitious project directed by Joe Wright had a tremendous success. In this picture, Alicia appeared in the role of an innocent Russian lady Kitty. Domhnall Gleeson performed the part of Konstantin Levin – a happy husband of Kitty.

The incomparable Keira Knightley was charming in the role of Anna Karenina. Jude Law took the part of Alexei Karenin and Alexei Vronsky was played by Aaron Taylor-Johnson.

This movie was recognized by two significant awards – Academic Awards and BAFTA.

In 2013 a Swedish actress enriched her filmography with two more pictures. British directors filmed a biographical thriller "The Fifth Estate". Benedict Cumberbatch, Daniel Brühl, and David Thewlis were invited to play the leading roles in this movie. This picture directed by Bill Condon referred to the people, who were able to find special information which could be used against the world leaders. Alicia represented a character of Anke Domscheit-Berg.

The same year a director Lisa Langseth invited Alicia to her new project - "The Hotel", where the actress acted in the major role of Erika – a girl who needed psychiatric assistance.

In 2014 Alicia Vikander delighted her fans with her role in an action movie "The Young Blood" by an Australian director Julius Avery where she presented the character of Tasha. In this picture, she worked together with Brenton Thwaites and Ewan McGregor.

Soon a drama "Testament of Youth" by British director James Kent was released. Three main characters performed by Alicia Vikander, Kit Harington and Taron Egerton represented to the audience a love story at the times of the World War First. The premiere show of the movie took place at London Film Festival in 2014.

A year later Vikander got a secondary role in the fantasy of a Russian director Sergei Bodrov Sr. - "Seventh Son". The film was shot and produced in Canada and in the USA on the base of Hollywood movie studios. Hollywood stars Ben Barnes, Jeff Bridges and Julianne Moore acted in the leading roles.

In August 2015 a new movie by Guy Ritchie under the title "The Man from U.N.C.L.E" was released. The events described in the movie took place in the middle of "cold war" between the USA and the USSR.

The C.I.A. and KGB agents which at first were enemies had to unite for the sake of the noble mission: they have to stop the activities of the criminal international group. Together with them was the daughter of the German scientist - Gaby Teller who helped them to infiltrate the gang. Alicia played the role of Gaby. Together with Alicia actors Henry Cavill and Armie Hammer appeared on the screen in the roles of the C.I.A and KGB agents respectively.

The same year Alicia got in the main cast of the science-fiction thriller "Ex Machina" and also presented herself in the Hollywood comedy "Burnt" in the company of famous actors - Bradley Cooper, Sienna Miller, Uma Thurman and Emma Thompson.

At the beginning of September 2015, the world premiere of the drama "The Danish Girl" directed by Tom Hooper was released. This movie tells a story about a young man who became the first who decided to change his sex. The action of the picture takes place at the beginning of the 20th century. Eddie Redmayne and Alicia Vikander played the major characters. For participation in this movie, the Swedish actress received the Academic Awards, Satellite Awards, and Screen Actors Guild Awards.

On the movie set of "The Light Between Oceans" Alicia Vikander fell in love with her colleague Michael Fassbender, who is 14 years older than the young girl. In this picture, they performed a married couple. Their relations lasted for 10 months. But in 2015 the couple announced about their break-up referring to busy working schedules. By the words of Alicia's father who visited his daughter at Academy Awards presentation in 2016, his daughter didn't separate with her boyfriend. In their personal life, there are still harmony and mutual understanding.

At present period of time, Alicia is settled in the capital of Great Britain and she only leaves when she needs to go to the movie sets in the USA or in mainland Europe. Except for her acting career Vikander works as a model. In 2015 she became an official representative of the trademark "Louis Vitton". The photos of the beauty regularly appear on the covers of the fashion magazines "Vogue" and "Elle". On Instagram, there can be found her fan-pages and her own account. Moreover, Alicia writes a micro-blog on the social network Twitter and has her fan-group in Vkontakte.

In 2016 Alicia accepted an invitation to act in the romantic drama "The Light Between Oceans" and in a gripping Hollywood action movie "Jason Bourne". On the 24th of August, 2017 a drama "The Tulip Fever" was premiered in Russia. In this movie, Alicia played the role of a married aristocrat Sophia. The plot of this picture is based on the events, described in the same-name book by Deborah Moggach.

Now a release of the Swedish drama "Euphoria" featuring Alicia and also a presentation of the movie "Submergence" are expected. In a year the next part of the franchise about Lara Kroft with Alicia Vikander in the leading role would come on the big screen all over the world.

In October 2017 it was announced in Mass Media that Vikander and Fassbender got married in secret in Ibiza. A young couple was seen together with wedding rings on their fingers. One of these nights they gathered their closest friends at the restaurant and celebrated their wedding. 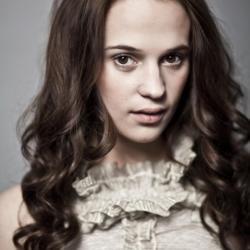