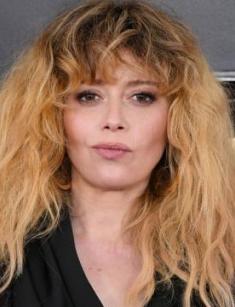 The actress Natasha Lyonne is famous for her unique comic talent, but her life has not been all about fun and joy. The woman had to fight drug dependence and managed to do that, saving her acting career. Today, the audience knows her for projects of various genres; Natasha looks natural in all of them and does her job splendidly.

The would-be artist was born in Manhattan, New York, in spring 1979. The girl’s parents were ethnically Jewish; her ancestors survived the horror of the Holocaust. The father, Aaron Braunstein, was involved in professional boxing promotion; the mother, Ivette Buchinger, was a license consultant.

The family relationship was tense even before the children were born. In the 1980s, the parents returned to Israeli and split up soon. The father stayed in the home country while the mother, Natasha, and her brother Adam came back to the United States. The life in New York was expensive, and the kids were deprived of many pleasures that money could bring. Natasha attended a Jewish school for a while, but the family moved to Miami, and the young woman graduated there. Only then she returned to New York.

The actress appeared in her first movie at the age of seven. The girl attracted much attention thanks to her red hair and blue eyes, and the mother took her six-year-old daughter to a modeling agency. Little Natasha participated in commercial photo shoots and received the first offer the next year; it was a small part in the screen version of Nora Ephron’s novel Heartburn.

At 16, Lyonne worked on the movie Everyone Says I Love You by Woody Allen; she personified the daughter of Allen’s character. The project also starred Natalie Portman, Edward Norton, Julia Roberts, and so on.

The young woman tried to take everything that life offered and ignored her chronical tiredness. As a result, she had health issues and got addicted to drugs. The loss of control was deteriorated by hepatitis C.

In 2005, Natasha took a break and had a treatment course: it was evident the situation had gone too far. The actress’s friend, the actor Michael Rapaport, had her kicked out from the apartment because of neighbors’ permanent complains about her inappropriate behavior; the next year, the artist was sued for threatening a neighbor.

Lyonne’s come-back happened in 2008. Since that time, she has been participating in many TV and theater projects; she is also a Broadway actress.

Many people know Natasha for series: in 2013-2019, she played in the series Orange Is the New Black. Other works include Law & Order: Special Victims Unit, Weeds, New Girl. In 2011, fans enjoyed the artist’s acting in Abel Ferrara’s 4:44 Last Day on Earth; 2016 brought the part of Lou in Antibirth. Two years later, Lyonne participated in the comedy Show Dogs.

According to the media, the woman’s personal life has been full of events; however, she denied the relationship with Adam Goldberg and Edward Furlong. Besides, Natasha Lyonne used to live with the journalist Andy Kaufman, but the couple never married.

Since 2014, the actress is dating the comedian Fred Armisen. Although there are no pictures together on Natasha’s Instagram page, the lovers’ photos regularly appear in other sources. All in all, the celebrity does not like to talk about her personal life; her accounts contain work-related moments and photos with animals. She does not post exposing pictures, like those in a swimsuit.

In 2019, Natasha continues to work on various movies and series. She has been a producer, director, and actress in the American comedy drama series Russian Doll and played the main character, Nadia Vulvokov. As the story runs, she celebrates her 36th birthday, meets a guy, and invites him to her place to spend a night together. Nadia has him out quickly after they have sex and goes to a store. A car strikes her dead when she is crossing the street, but as long as the woman opens her eyes, she finds herself at the same party. The events repeat themselves, and the protagonist begins her investigation to escape from death.