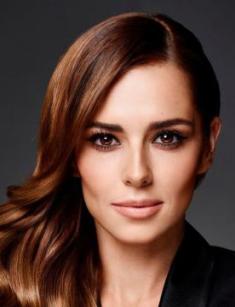 The girl from the covers of Elle and Vogue magazines named Cheryl Cole became famous not only as a model but also as a pop singer, dancer and philanthropist. The participation in Girls Aloud, a successful solo career and judging in The X Factor brought glory to the beauty. Nowadays, the star does not forget about the needy people and spends a lot of time and money on charity.

Cheryl Ann Tweedy was born in Newcastle on June 30, 1983. She was the first child for her father, Garry Tweedy but her mother, Joan Callaghan gave birth to the fourth child of her five children. Her parents were not married officially and they broke up when their daughter was 11 years old.

Cheryl showed an interest in art from a young age, so the girl was engaged in dancing at the age of 4. Besides, her external data allowed Tweedy to win beauty contests. Thus, the girl won the contest "Future star" at the age of six. Also, Cheryl was "Miss Newcastle" as a teenager and was recognized as the sexiest girl in the city.

The young beauty even starred in commercials. The future star starred in the advertisement of the British company Centrica together with her brother. Tweedy graduated from secondary school at the same time. In 1999, the girl left Newcastle and participated in a short summer holiday course at The Royal Ballet School's Summer School (London). Cheryl managed not only to study but to earn a waitress at the same time.

Tweedy worked as a backup singer in several local groups at the age of thirteen. The future star went to conquer the show Popstars The Rivals when she was 19. Cheryl managed to overcome a severe selection and performed brilliantly throughout the project. The organizers of the project included Cheryl and four other girls in the newly formed group Girls Aloud.

Glamour announced Girls Aloud as the band of the year two years later. The girls wanted to receive the BRIT Awards, competing for the title of the best pop artist at the same time. The group Girls Aloud was nominated for the BRIT Awards five times and the song "The Promise" was voted the best single in 2009.

According to the ratings of UK Singles Chart, many songs of the group became the best. These songs were "Walk This Way," "The Promise," etc. But the work of the team was not always smooth, there were scandals. It was Cheryl, who had a bad temper. The performer frequently complained to the producers and demanded special treatment.

No one hoped that the girls would win the love of millions of fans. But in 2007, the group became the most successful team, which was formed by the results of a reality show. The peak of the band's fame was in 2009. The girls earned 25 million pounds at that time.

But members of the popular group decided to do solo projects in 2009. It was planned that the band would resume work a year later but this pause lasted until 2012. Two performances in support of Jay-Z and Coldplay was only the exception.

In 2012, the music group Girls Aloud worked again to celebrate ten years of existence of the band. The collection of the best songs of the band was released on the separate discs and the farewell tours were organized.

Cheryl Cole paid attention to her solo career too. In 2008, she recorded the song "Heartbreaker" with William Adams. Cheryl presented her first personal album "3 Words" a year later. It became a leader in many of the music rankings and achieved platinum status.

The first single of this disc, "Fight for This Love" took the fourth place in the number of sold copies. The single "Parachute" was also popular, which won leading positions in the key charts of Russia.

The work of the performer on the second album "Messy Little Raindrops" was held in 2010. Ryan Tedder and Ellie Goulding worked on it too. This CD became no less popular and profitable than the previous one.

In 2012, the third album of the star called "A Million Lights" was released. Rihanna, "Far East Movement" and Taio Cruz were involved in its release. Cheryl presented a video for a spectacular song "Ghetto Baby," which was created for the young singer Lana Del Rey.

The fourth album "Only Human" was released two years later. The video for the song "Crazy Stupid Love" was presented at that time. Tinie Tempah was involved in the creation of the song. The attention of fans was attracted by the song "I Don't Care," which became the fifth work of the star, which topped many music charts. It was a record for the UK.

The talented star tried her hand in other ways. So, the girl participated in The X Factor (the UK) as a judge since 2008. Cole`s colleagues took first place or they were in the top five: Alexandra Burke (season 5) and Joe McElderry (season 6) became winners, Cher Lloyd (season 7) and Lauren Platt (season 11) took fourth place.

The press declared the girl "the nation's favorite" when Cheryl's appeared in The X Factor. The magazine FHM recognized the young star as the sexiest girl in the world two years in a row (2009 and 2010). Cole`s height is 5,2 feet (160 cm) and she weighs 105 lbs (48 kg). Madame Tussauds presented a wax figure of a celebrity and there was a second copy four years later.

In 2011, Cheryl planned to become a judge in the project X Factor (USA) and signed a contract with the organizers. But the producers of the show replaced the British star on Nicole Scherzinger. However, Cole filed a lawsuit against the organizers of the project and got material compensation ($2 million).

Cheryl repeatedly showed her writing abilities. In 2008, the singer worked on the autobiography of girls from the project Girls Aloud. Cole signed a contract with the publishing house HarperCollins Publishers LLC in terms of writing five books a year later. In 2010, the singer's first novel "Through My Eyes" was presented. The star pleased fans with the autobiography two years later. Her book struck readers with the beauty of presentation and frankness.

Her bright appearance allowed Cheryl to earn in advertising companies. In 2009, the celebrity became the face of "L'Oréal." Besides, the singer worked on the creation of products under her name. In 2012, the girl presented her collection of shoes. Cole presented a new perfume for women "StormFlower" two years later.

The singer was engaged in charity work with the fund "Comic Relief." Cheryl and many other stars participated in the campaign to fight malaria in African countries. Celebrities collected 3.5 million pounds, which were sent to charity.

But this project could become fatal for this singer. The girl became ill with malaria and survived barely, after her return from Tanzania. In 2011, Cole became the founder of a charitable foundation, whose goal was to help young needy people.

In 2004, the football player Ashley Cole appeared in the life of the star and young people legalized their relationship two years later. The celebrities signed a million contract with the edition OK! regarding the filming of their wedding. Ashley and Cheryl planned a small ceremony on the beach for the first time but they had a grand wedding.

However, a great wedding did not guarantee a happy marriage. In 2008, there was the information about a fleeting relationship of Ashley and Emma Walton, who decided to give an interview to the magazine The Sun for the sake of "minute of fame." Also, the model Brooke Healey told about the night with the football player in 2006. These revelations were a huge blow and a disappointment for Cheryl Cole. The girl gave up her work, took off her ring and went to her mother. However, the star couple made peace soon.

The family reunion was temporary because Ashley had too many "sins." In 2010, there were five more cases of betrayal. The singer left her unfaithful husband and asked the press not to interfere in her personal life.

In 2014, the star decided to marry the Cannes restaurateur Jean-Bernard Fernandez-Versini for the second time. But this marriage was short too and the young people broke up finally in 2016.

There were other unpleasant moments in Cheryl's life. So, in 2003, Cole quarrelled with the worker of the club The Drink (Guildford). The girl was accused of insults and even a fight. As a result, the court sentenced the celebrity to pay fine and public works.

In 2013, Cole surprised her fans with a tattoo at the bottom of the back because red roses looked very tempting. The star singer drew the attention of millions of fans, paying several thousand for a tattoo.

Nowadays, Cheryl is very famous: the girl is valued for her beauty, vocal abilities, strong character and active life position. There are more than 3 million subscribers on her Instagram. They follow every step of the star singer. Cheryl Cole has a net worth of $40 million.

Cheryl does not despair and believes that she will be happy in personal life, despite two failed marriages. At the end of 2015, the singer met Liam Payne, the soloist of the musical group One Direction. Young people had relationships, although Cole is ten years older than her chosen one.

Liam and Cheryl decided to start a family and have children recently. In November 2016, the performer came to the charity concert "Fayre Of St James" in a tight dress, which allowed the audience to make sure that the star is pregnant. Fans could notice Cole`s rounded belly on the photo from the event. On March 22, 2017, Cheryl gave birth to Payne's son.

According to the latest news, the couple is going to legalize the relationship and plans a wedding. However, she dreams of a small wedding, surrounded by close people, Liam wants to organize a grand wedding.

The star continues to pay attention to charity. In 2015, Cole opened a help center for young people, who try to find a job, as well as to overcome alcohol and drug addiction. In 2016, Cheryl received a special award at the next evening of the "Global Gift Gala" for supporting needy people.