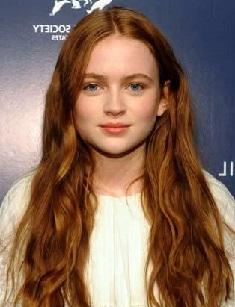 Sadie Sink is a 17-year-old famous American actress, majorly known for playing Max in the hit Netflix series Stranger Things. Interestingly, the family Sink grew up in had no inclinations to the world of acting – she came to prominence by herself, without the help of relatives.

In the list of the movies and TV shows she took part in, there are lots of decent projects. But how such a young girl managed to gain worldwide recognition? Read the answer below!

Sadie Sink’s birthday is April 16, 2002 - she was born in Brenham, Texas, to a sportsperson father and a homemaker mother. Her father served as a coach of local football teams in the US. Besides Sadie, there were three more children in the family - she had three brothers.

The girl began her acting career as a child. When she was a little kid, she liked watching TV shows. One of her favorite movies was High School Musical. The Disney movie influenced her personality hugely. It made her develop a lifelong crush on actor Zac Efron and also inspired her for becoming an actress.

She passed her childhood in her motherland, a little town with a keen interest in sports. Except for doing sports, she joined a local community theater to pursue her dream of acting in front of a large audience. In several of her early stage productions, she appeared on stage with her real-life brother – they gave her confidence in her talent.

In 2012, Sadie Sink took part in an audition for a Broadway show named Annie and got through it successfully. She was just ten years old then, and the experience proved to be highly rewarding for her.

Several months later, Sadie’s family moved to New Jersey. The big city gave her more opportunities - she started training in dance and vocals, in order to perform better at musicals and Broadway shows.

She became busy after stepping into her teenage years. While studying at a high school, she also devoted time to theater. At one point in time, she was doing eight shows a week.

As a 13-year-old girl, Sadie Sink had already started auditioning for several TV and movie roles. Her Broadway performances also helped her bag some early roles. She made her screen debut in 2013, with the small role of Lana in an episode of the series The Americans, titled Mutually Assured Destruction.

Even though her character was a secondary one, Sadie showed her talent and abilities. As a result, the series was named one of the most critically and commercially acclaimed series of the year.

Later she was invited to star in the series Blue Bloods. She acted as Daisy Carpenter in one of its episodes, Insult to Injury. The picture happened to be successful. It was filmed mostly in the suburbs of New York, closer to Sadie’s house in New Jersey.

So, Sadie Sink tried to combine her acting career and studying but didn’t manage to do it – her academic successes were low. Her mother did not allow her to compromise on her academics, and this made Sadie go through a tough time.

2015 was marked by the first breakthrough role of Sadie Sink’s career. She was invited to act in the series American Odyssey. She acted as a daughter of the leading couple. Her character, Suzanne Ballard, appeared in 11 episodes of the series.

The picture was firstly shown on screen in 2015 and ran for a season. Despite earning some positive feedback, it mostly got average reviews. NBC decided to cancel the series due to its increasing budget. However, Sadie’s role in the series laid the foundation for her next series, which turned out to be a life-altering role for her.

The next year, fans could see her playing Kimberley in the biographical drama Chuck, which was based on the life of boxer Chuck Wepner.

In 2017, the actress starred in a biographical drama movie named The Glass Castle, which was based on the memoir of Jeannette Walls. Sadie acted as young Lori Walls there.

In 2018, she gave her voice to a documentary movie titled Dominion. She is also set to appear as Haley in the movie Eli, which is slated for a 2019 release.

Sadie Sink was a big fan of Stranger Things when she was invited to the audition for a role in the series, in September 2016, and succeeded there. Sadie had to undergo a slight physical transformation for her role. She acted as a tomboy and the crush of two of the leading boys in the series. The series brought its directors a huge international success and helped Sadie get international fame.

Netflix has announced that the series would have another season and that Sadie would probably appear there, too. Sadie and her colleagues Wyatt Oleff, Noah Schnapp, and Dacre Montgomery have been nominated for the Screen Actors Guild Award for Outstanding Performance by an Ensemble in a Drama Series and the MTV Movie & TV Award for the Best On-Screen Team.

Sadie is named one of the most beautiful girls from show-business – she has a perfect natural beauty which remains even when the girl is without makeup.

Sadie Sink became a vegetarian after she met actor Woody Harrelson on the sets of her movie The Glass Castle. She got on well with Woody on the set and was greatly influenced by his environment-friendly lifestyle.

Sadie had once claimed to be a big fan of actor Emma Stone and had expressed her desire to work with her.

Sadie Sink is often compared to Millie Bobby Brown by her style and appearance and their fans often argue in social media who is better.

In her career, Sadie has partnered with Nike, Pull and Bear, TopShop and other companies, has been featured in their commercials.