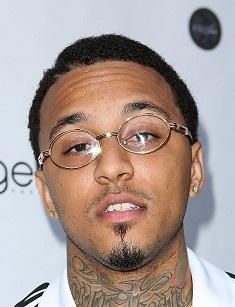 Kirko Bangz is a popular American rapper who started his career at a young age, has released several albums and has made many collaborations with other famous rappers.

Kirko Bangz, born Kirk Jerel Randle, spent his childhood in East Houston, Texas. He was left without father and was raised by his mother. She had to work a lot to provide her son with everything needed.

Kirko tried to help his mother and earned money working in different jobs. During his work at the restaurant, he earned the title of best worker of the month. For him the family and friends were always in the first place.

The pain of his mother's struggles was a big inspiration for him to write music. When Kirko was fifteen years old, he started to write his first rap songs, but he didn't show it to anybody.

He graduated from North Shore High School in Houston and got an education at Prairie View A&M University. At school he had a good academic performance because his mother wanted his son to get a good education for his future life. Kirk managed to finish his studies and to start the music career when he got acquainted with the colleague who helped him to record his first song.

Kirko Bangz began his career in 2009 when he issued his first work: the album Procrastination Kills. The rapper took the stage name from the singer Kurt Cobain's name, as he was his big fan.

His first official single ? came out in 2011 and suddenly became one of the top hits.

In 2011, the artist recorded the song Do You Remember featuring the rapper Drake. It was included in the mixtape Progression.

The singer wrote his second single titled Drank In My Cup in September, 2011. The track skyrocketed in the charts and became one of the top songs. Kirko was praised for his talent, and other famous hip-hop artists made remixes on this song.

On September 4, 2012, Kirko announced about coming out of the new mixtape called Procrastination Kills 4, and the third single from his debut album Keep It Trill. He also received positive feedback after the release of the song On My Own. In spring 2013, the title of his debut album was out; it was called Bigger Than Me.

On August 12, 2013, his next mixtape, Progression 3 was released, that featured some popular rappers, including Nipsey Hussle, Z-Ro, Paul Wall, Slim Thug, and others.

In 2014, Kirko signed a contract with Atlantic Records, and it was a very successful year of his career, as he presented his next debut album. On January 28, 2014, he released the album's first single called Hoe which was a big hit. Bangz made joint tracks with several famous rappers.

In 2014, Kirko took on a Drake instrumental on the song Love Rihanna. In the lyrics of this song he expressed his love for the music’s leading ladies. His brand new mixtape, Progression 4 included hit songs Rain Down, featuring August Alsina and the track For The Summer.

In December, 2014, the artist shared his next mixtape: the Progression V: Young Texas Playa. The album was commercially successful and scored a good rating.

On July 21, 2015, the singer signed a new contract with 300 Entertainment. However, the album Bigger Than Me went unreleased. The rapper spoke out later that Warner Music Group owned some of his unreleased tracks.

On August 31, 2015, Kirko put out his first EP titled Fallin' Up Mix with new single Worry Bout It featuring Fetty Wap. In the early of 2015, Bangz issued the single In Her Lane along with the artist Ty Dolla $ign.

In 2016, Kirko came up with his second EP, titled Playa Made and the release of a new mixtape titled Back Flossin'.

In November 2017, the singer announced an upcoming remix of his single recorded with Tory Lanez titled Know What's Up.

In 2018, he made a collaboration with Chris Brown producing the song Date Night (Same Time). He also recorded the track Work Sumn along with Tory Lanez & Jacquees.

In early 2019, he was back with a new single Like Whoa which gained good critics.

At present, the rapper is single, but he had several partners. In 2010, Hazel Montana, an American dancer, was his girlfriend. However, they broke up in 2014.

In 2014, the rapper started dating American model, Rayne Guerra. But their alliance did not last long enough. The couple ended their bond in 2015.

Kirko is a good basketball player and plays with his friends from time to time.

On his Instagram account, the singer has over 600,000 followers. He posts photos from his everyday life. Kirko travels a lot, during his career he was able to visit many places.

The fans of the rapper collected his quotes about life, in which he expressed his opinion on such topics as relationships, career and his attitude to fame.

Currently, Kirko is known to live in Houston where he was born.

The net worth of the singer is estimated at $1,5 million.