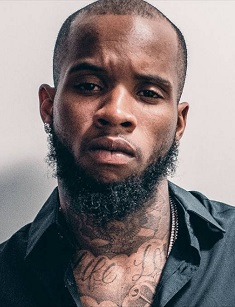 Tory Lanez (original name is Daystar Peterson) is a rapper, singer, songwriter and record producer from Canada. He came to prominence after releasing a top mixtape «Conflicts of My Soul: The 416 Story» featuring Roscoe Dash and Kirko Bangz in August 2013. Nowadays his albums and songs get to the tops of world charts. Lanez has collaborated with such famous stars as 6ix9ine, Rebel, Bhad Bhabie and many others. It means it's high time for us to know more about his way to success!

Tory's birthplace is Brampton, Ontario, Canada – he was born there on July 7, 1992, to the family of a Bajan father, Sonstar, and Curaçaoan mother, Luella. When Lanez was born, the family lived in Montreal. Later they moved to Miami, Florida.

As a kid, the musician went through his mother's death. His dad worked as an ordained minister and missionary, and they had to change places of living constantly. At last, they settled down in Atlanta, Georgia. There Tory's dad found a new woman and remarried.

Lanez became interested in rap music from childhood. In Atlanta, he met a good friend Hakeem who worked as a janitor. He made up Tory's nickname as a comment on Daystar's thrill-seeking tendencies, that sometimes saw him mucking around in the street, not looking for traffic and playing in the lanes.

In 2006 Lanez moved to Jamaica, Queens, New York with his cousin Dahir Abib – his father sent the boy there because of bad behavior. However, his grandmother, which he was sent to denied taking care of him. So, young musician had to survive himself at the age of 15. In an interview, Tory said he ended up moving downtown with three men which he didn’t know. He came into the house, and he didn’t realize how things worked. From like fifteen to eighteen, Lanez was fighting them. It was every man for himself.

That’s what made him a man, having to fend for himself and being in a situation where there is no dad, no grandma, and no mom to help you. From the other side, it changed the person that Tory is today, made him strong and wise. As a 16-year-old teenager, Lanez dropped out of a school and started performing at the concerts with his own lyrics.

Interestingly, Tory becomes angry when someone calls Toronto «the 6.» Get the lingo straight. It might have once been cool to call the Canadian city by its well-known nickname, but Tory made his opinions clear about the cliche in a now-deleted Tweet. Don’t go calling Toronto ‘the 6’ around him

2009 was marked by Tory's debut mixtape called «T. L 2 T. O.» While living in South Florida, Lanez worked on some of his music videos he later published on a personal channel. Having posted a video of him freestyling over Lloyd Banks' «Beamer, Benz, or Bentley,» Lanez grabbed Sean Kingston's attention. They decided to meet during Justin Bieber's tour. When the day came, Sean made Tory perform at the concert.

In 2010 the musician released the mixtapes named «Just Landed», «One Verse One Hearse», «Playing for Keeps and Mr.1 Verse Killah». The next year, he signed a contract with Kingston's Time is Money Entertainment. Besides, he created new mixtapes «Mr.Peterson», «Chixtape», and «Swavey». Several months later Tory left the label for the sake of becoming an independent musician. In 2012-2014 the most popular Tory's mixtapes were released – «Sincerely Tory», «Conflicts of My Soul: The 416 Story» and «Chixtape II».

In April 2014, the star published a video of behind the scenes of the «These Things Happen Tour» with G-Eazy and Rockie Fresh. On June 2, 2014, the musician released a song «Teyana» in honor of a singer Teyana Taylor. In her turn, she published a response called «Dreams of Fuckin' an R&B such.» On June 6, Tory pleased fans by a new song «The Godfather» where he told about the inclinations to start a series «Fargo Fridays.» The same month, the musician released the singles «I'll Be There,» «Talk On Road» and «Balenciagas.»

Having published several songs of the series, Tory released the song «The Mission» and started a tour «Lost Cause Tour.» On October 1, the musician released a mixtape «Lost Cause» (initially, it was planned to be released on September 29). It included the songs for such singers as Akon («Been getting' Money» with Jeezy), Casey Veggies («Actin' Up»), August Alsina («My Niggas» with Meek Mill), T.I. and Travis Scott. In February the musician announced his upcoming joint EP with the WeDidIt Records producers.

On July 15, 2015, Lanez released the first song from his debut album «Say It.» That time he also signed a contract with Benny Blanco 's Mad Love Records and Interscope Records. On September 15, a new song «B. L. O. W.» was released. On December 25, 2015, Lanez added «Chixtape III» and «The New Toronto» to the list of his mixtapes.

On January 18, 2016, the second album's single was released – it was called «LA Confidential.» Tory Lanez was invited to perform with «Say It» on Jimmy Kimmel Live! - the show held on January 28. A month later, Tory released a remix of MadeinTYO's «Uber Everywhere.» On March 4, the musician published a song «Tim Duncan» – it was a part of his series. The next week was marked by Lanez's new single «Real Addresses.»

In April, Tory Lanez and ASAP Ferg announced a future tour named «The Level Up Tour.» As a promotion of their tour, they released the song «Line Up The Flex.» Besides, the musician was invited to star at Summer Jam and Pemberton Music Festival in the summer of 2016. Interestingly, when Lanez was offered to take part in a photo gallery to the 2016 XXL Freshmen cover, he denied cause he felt he was in a higher league musically than the other artists being considered. On May 6, two new songs «For Real» and «Unforgettiful» were published as parts of the Fargo Friday series. On July 29, the musician released the official second single «Luv» on iTunes.

Also, the singer revealed the name of his future album (which would be released on August 19, 2016) - «I Told You.» On July 5, the world could hear Tory's two remixes for Drake's «Controlla» and DJ Khaled's «I Got the Keys.» On July 20, a tour for album's promotion was announced by the musician. Half a year later, on March 2, 2018, Tory released the second studio album «Memories Don't Die.» The same year he also released the album «Love Me Now?» – on October 26, 2018. Date of release of his new Latin project «El Agua» was announced to be on May, 2019.

Lanez’s net worth is evaluated at $2 million.

Speaking about his own music style while an interview, Lanez noted he called it Swavey. Swavey is a two-adjective word. A lot of people use it as an attribute, but the real definition of swavey is a genre of music. The genre of music is the genre of fusing more than one together.

For the last six years, rappers Tory and Drake have been intertwined in a very strange rivalry.

Their story dates back to February 2010, when a video surfaced on YouTube titled: Drake's Lil Brother Tory Lanez Freestyle In The Room. The video features a young Lanez, who sounds eerily similar to JAY-Z. Tory doesn’t look anything like Drake, doesn’t mention Drake in the rap, there’s nothing about the video that connects them as brothers except for the subject line.

The YouTube account belongs to YHHNNify. If you go to HHN247’s official YouTube page, however, the video is nowhere to be found. YHHNNify has only a handful of videos uploaded to the account, and only a few have done numbers; Tory's video is the third most popular with over 89K views. Tory’s connection with Drake didn't stop there.

When he was 17, Tory released «Play For Keeps», a mixtape that he believed was so undeniable that he dared Drake to listen with $10k at stake if he wasn’t impressed. A polygraph test would determine the authenticity of Drake’s honesty. The year was 2010; Drake was buzzing off «So Far Gone» with «Thank Me Later» just months away. He was not yet a superstar but a blinding light of potential.

Interestingly, Tory didn’t ask for a deal; he didn’t ask for money; he was prepared to pay Drake simply for his opinion. We don’t know how much worth was in a Drake co-sign back then, but we think on a deeper level what Tory wanted was approval, acceptance, and recognition. Drake never gave it to him, at least not in public. Probably, that’s when Tory named his rival, and it happened to be the biggest rap artist coming from Toronto.

Six years have gone by since the original challenge, and yet, Tory is still trying to bait Drake. Tory doesn’t need a co-sign. He doesn’t need acceptance, nor recognition, from Drake, but he continues to taunt him publicly. For example, the video of him in Philly—immature, childish, but also a blatant shot at the Toronto God (on The Breakfast Club Tory refused to comment on the video and Drake). The BlackBerry shot that Tory sent during his Sway In The Morning freestyle could only have one target. Tory teaming up with Joe Budden for the single «Flex» is nothing but a personification of "the enemy of my enemy is my friend."

Drake calling out all the «Fake Controllas» on stage is, without a doubt, a shot in Tyga and Tory's direction.’ There’s something deeper that drives Tory, something beyond a challenge or rivalry. Listen to «Loners Blvd» from Tory’s I Told You album. Listen to the beat, the flow, the content—does it sound eerily familiar? Almost like a complete replication of Drake’s «Look What You’ve Done»/«Too Much»?

The elegant piano production, the sample that plays in the background, and the sentimental autobiographical storytelling using Drake’s exact flow. Tory’s Aunt Suzanne seems to contrast Drake’s uncle that let him drive his Lexus. It’s also rather amusing that on this record Tory mentions performing at Warehouse in Houston where he was booed while Bun B watched.

The same Warehouse that Drake mentions in «Too Much,» when he reminisces back in 2009, being nervous if Bun B would show up if anyone would show up. Nathan once wrote about how Tory was coming for Drake’s spot by making Drake music, like a grand scheme to «do Drake better than Drake,» but there’s a line where passion starts to look obsessive.

On March 26, 2016, during a concert in Midland, Texas, violent scuffles between security forces and concertgoers occurred. Lanez then proceeded to tell the crowd to «fuck shit up,» which incited a full-on riot and forced police to shut down the show. Multiple people were arrested. The venue and concert promoters are considering legal actions against Lanez.