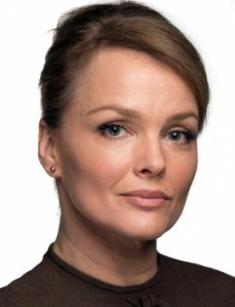 Dina Meyer is an American actress who is often compared to Rosamund Pike. She debuted on television in 1993 and earned the audience’s love for the roles of Dizzy Flores in Starship Troopers (the artist appeared naked in some episodes), Jane in Johnny Mnemonic, Kara in Dragonheart, and Detective Allison Kerry in Saw.

The future star was born on December 22, 1968, in Queens, New York. Her father owned a car repair shop, and her mother kept the house and brought up the children, Dina and two sons.

The girl loved to dance from early childhood. As soon as she turned nine, the parents took her to a dance class; these skills proved to be useful later, when she auditioned for roles.

Meyer attended an art school and then entered Long Island University to study business; further on, she enrolled at the Sorbonne in Paris and spent there a couple of months.

In 1995, the actress played one of the main characters in the fantastic action Johnny Mnemonic with Keanu Reeves. In 1996, she co-starred with Dennis Quaid in the adventure fantasy Dragonheart.

She artist did not ignore television and appeared in three episodes of iconic Friends; she personified Joey’s (Matt LeBlanc) girlfriend. The audience could also see her in the comedy series Ally McBeal, Barry Sonnenfeld’s Secret Agent Man, Six Feet Under, and the fantastic series The Outer Limits.

In 2001, the artist received the lead part in the Canadian thriller Deadly Little Secrets and cooperated with Sylvester Stallone in the 2002 action D-Tox.

Meyer’s most famous roles pertain to Saw and its sequels. Overall, she has participated in many horrors: Unspeakable, The Storyteller, Crazy Eights, Decoys 2: Alien Seduction, and Piranha 3D. Other popular works include the fantastic action Star Trek: Nemesis, the detective Crimes of Passion, the romantic comedy His and Her Christmas, and the thriller The Lost.

The action AmeriGeddon was premiered in 2016; it starred Dina Meyer, Marshall R. Teague, and AnnaLynne McCord. It is a story about the future where the USA is on the edge of a catastrophe and total collapse. Terrorists have destroyed the country’s electrical power system and took control of important assets. A special unit guided by a young officer challenges the terrorists; nobody knows where it is going to lead.

The same year, the audience saw the actress in the thriller The Unwilling. Five relatives gather together in the main character Harris’s (David Lipper) house to read their hateful father’s last will. They receive a delivery: an old antique box full of the items that the deceased had given to the relatives. Soon, a chain of mysterious deaths makes Harris understand that everybody will be buried in the house unless they solve the hellish box’s enigma.

There is no information about the actress’s personal life: she avoids questions about her husband and kids. To keep the audience interested, she shares hot photos in social networks; she looks athletic and young.

In February 2017, Dina appeared in the horror The Evil Within about a young man Dennis (Frederick Koehler) who had had a mental disorder since his childhood. The parents used to take care of their son, but they died tragically. Dennis’s elder brother, John (Sean Patrick Flanery), started looking after his sibling. However, the life with a sick person implies particular limits for the healthy one; John is not ready to spend all the time to Dennis.

The same year, the artist worked on Girlfriend Killer and Snatched.

2018 was marked with the premiere of Unbelievable!!!!! It is a story about four astronauts who go to the Moon to see what has happened to their NASA colleagues who have stopped going for a contact. The team finds the bodies of the creatures that killed the previous expedition and also died.

The four astronauts go back and find out that every human being has been transformed into another life form. The Martians have conquered Earth and try to eliminate the remnants of humanity. The astronauts attack the occupants and discover how to get rid of the alien threat.

Despite her busy schedule, the woman does not forget about her fans: she regularly posts videos and photos from vacation and daily life on Instagram.