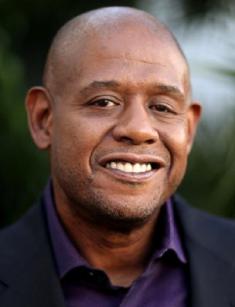 Forest Whitaker is an American actor and director famous for the role of the Ugandan President, Idi Amin, in the drama The Last King of Scotland; he won the Academy Award for this work as well as the Golden Globe, BAFTA, and Cannes Film Festival Award. The audience remembers the artist for the movies Bird, Black Nativity, Catch 44, Diary of a Hitman, and so on.

Forest Steven Whitaker III was born in Longview, Texas. When the boy turned four, the family moved to Los Angeles. The father, Forest Steven Whitaker Jr., worked as an insurance agent. The mother, Laura Francis, entered a university when she had small children and became a teacher. Forest had an elder sister Deborah and two younger brothers, Kenn and Damon.

When Whitaker was a school student, he attended a vocal studio and participated in children’s musicals. He was also interested in sports, especially football and martial arts. Later, Forest got a black belt in kenpō.

Thanks to his football achievements, the young man gained a scholarship and entered California State Polytechnic University. Still, sports did not become significant in his life: Forest had a severe back injury and had to leave the team and the university.

Under those circumstances, the young man came to his second passion, music, and enrolled at the University of Southern California. He could have become an opera singer, but theater appeared in Whitaker’s life at that moment. The student transferred to the drama school. After graduation, he went to Great Britain and continued his education at the Drama Studio London.

It was football that brought the young talent to cinematography: Forest Whitaker personified a football player Charles Jefferson in the youth comedy Fast Times at Ridgemont High (1982), the prototype of many popular projects, such as American Pie. Besides, the artist appeared in Oliver Stone’s Platoon and the comedy Good Morning, Vietnam starring Robin Williams.

The first years of the actor’s career were marked with series: North and South, American Masters, Amazing Stories. In the second part of the 1990s, he appeared in Species, Light It Up, Smoke. In Phenomenon and Battlefield Earth, Whitaker had the chance to collaborate with John Travolta.

The role of the saxophonist Charlie Parker in Clint Eastwood’s drama Bird turned out to be a breakthrough. To get into the character, the artist locked himself in an empty garret and learned how to play the musical instrument.

The movie was a tremendous success at the Cannes Film Festival. Soon, Whitaker was showered with new offers.

The actor played the lead role in the thriller Diary of a Hitman, the crime movie A Rage in Harlem, the shocking sexual melodrama The Crying Game, and the crime action movie Ghost Dog: The Way of the Samurai. Speaking of Ghost Dog, many critics marked that only Whitaker could play a murderer with humanity and warmth.

Sometimes, Forest Whitaker is compared to Martin Lawrence, the star of the comedy action movie Blue Streak. However, despite their external resemblance, the colleagues’ talents are diverse: Whitaker prefers drama roles to comedies.

The beginning of the 21st century was marked with the action movie The Fourth Angel and the detective Phone Booth; besides, the actor got the role of the narrator in the series The Twilight Zone. The collection of movie novellas American Gun was also successful; it showed the advantages and disadvantages of the easy gun distribution.

2006 brought the peak of the actor’s career: together with Kim Basinger and Danny DeVito, he appeared in the drama Even Money and the popular medical series ER. What is more, Whitaker gained the role of the President of Uganda in the movie The Last King of Scotland. This project gave the actor BAFTA, the Golden Globe, and the Academy Awards.

The next year, Denzel Washington invited Whitaker to his movie The Great Debaters about the problems of black people in the United States during the Great Depression.

2008 was successful. Forest gained the lead role in the crime thriller Street Kings: Captain Jack Wander who covered the city mafia for years. His colleague, the detective Ludlow (Keanu Reeves), finds out this secret and murders his boss. The movies Freelancers and Pawn that showed the criminal world again were also appreciated by the audience.

Later on, Forest appeared in the romantic comedy Our Family Wedding, the crime action movie Catch 44, the musical Black Nativity, and the crime thriller Zulu.

2013 was marked with the lead part in the biopic The Butler. It is the story of Cecil Gaines who served in the White House for all his life and saw the whole American history: the oppressed class turned into the equal group of the civil society, and one of the black people became the president. Oprah Winfrey personified Cecil’s wife.

All in all, it was a remarkable year for the artist: the movies Out of the Furnace, Vipaka, and The Last Stand came out. Each time, Whitaker created various images and extended the limits of his stage types. Soon, the sports movie Southpaw, the musical series Empire, and the drama Two Men in Town were released.

There were many positive reviews on the fantastic action movie Rogue One: A Star Wars Story and the sci-fi project Arrival. In 2016, the actor appeared in the historical drama Roots about the fight of enslaved black people for their freedom.

Forest Whitaker has also tried himself as a director. He started creating movies in the early 1990s and presented several projects; the romantic melodrama Hope Floats and the youth comedy First Daughter are considered to be the most successful ones. The man has also been recognized as a producer: the movie Door to Door was the laureate of the Emmy Award.

In his youth, the artist used to date his colleague Raye Dowell who played secondary characters in the 1980s. Several years later, when they broke up, Whitaker met the woman of his life. The young people met at the movie set of the biographical TV series Intimate Portrait; Forest played himself, and his future wife, Keisha Nash, debuted as an actress.

Four months later, Keisha became Forest’s wife and stopped her career after the military drama Proud. Two children were born in this family: the daughters Sonnet and True. The son Sergio Hyatt and the daughter Autumn from the previous relationship were also brought up by the couple. In 2018, Forest and Keisha separated.

The actor is known for his healthy lifestyle, vegetarianism, and love of sports. He likes yoga and continues to be involved in martial arts. Bruce Lee himself taught him; in his turn, Whitaker taught the actors Denzel Washington and Brandon Lee how to look effectively in front of cameras.

Many fans wonder what is wrong with the actor’s eye. It is the left eyelid droop, the inborn defect that prevents the eyelid from opening fully; as a result, the field of vision is reduced. Forest Whitaker’s left eye is used seldom; his condition is deteriorating, and the artist is considering surgery. Agents try to persuade him not to do that: they are afraid the man would lose his peculiar charm and mystery. Apart from that, Forest has no health issues and continues to star in many projects.

In 2017, the thriller The Forgiven came out; it is the story set in South Africa during Nelson Mandela’s governance.

Today, the actor is actively working on new movies. The adventure action movie Black Panther, the fantastic comedy Sorry to Bother You, and the drama Burden are the artist’s recent works. 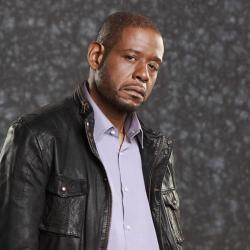