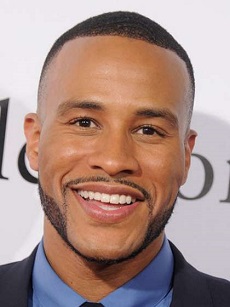 DeVon Franklin is an award-winning outstanding Film & TV producer, best-selling author, in-demand preacher and spiritual success coach. Various sources call him one of "Most Influential Christians Under 40," "Top 10 Producers to Watch," "Top 100 Influential African-Americans in America." What is the secret of such a huge success? Let’s know!

DeVon Franklin was born on April 13, 1978, in Oakland, California, the United States to the family of Donald Ray Franklin and Paulette Franklin. He has two brothers Donald Ray and David Brandon.

Franklin's parents ended up parting ways, and the children started living with their grandparents. Several days later, his dad died because of a heart attack – he was only 36 years old. In his future admissions, DeVon said his mother, grandmother, and aunts helped him get through this horrible tragedy.

After his father's death, DeVon decided to focus on studies and different activities. So, he became interested in theatre, movies, and television. Being a teenager, DeVon Franklin studied different movies and TV shows, trying to understand how stories and scenes were put together in the hope of understanding how to move and inspire people through entertainment, the way The Cosby Show and The Color Purple had inspired him. That time he also started helping out at his uncle's church.

Speaking about DeVon Franklin's education, he studied at the University of Southern California from which he graduated in 2000.

DeVon started his career being a student – he worked for Will Smith and James Lassiter at Overbrook Entertainment. Later, he was hired as a junior executive by Tracey Edmonds' company Edmonds Entertainment.

In 2003 Franklin started working on a creative executive position at Metro-Goldwyn-Mayer in Hollywood's studio system. In his book entitled Produced by Faith Franklin shared he liked his position very much and felt passion for it. He contributed to such projects as John Travolta's 2005 crime-comedy Be Cool.

However, his career at MGM was not long. In 2005, Sony Pictures Entertainment bought out MGM. Shortly after, he was offered a position of a Director of Development at Sony's Columbia Pictures.

Serving there, Franklin produced such hit movies as The Pursuit of Happyness, Hancock and Seven Pounds. He collaborated with his former boss and mentor from Overbrook Entertainment, Will Smith, to make the pictures.

In an interview, Franklin said the picture The Pursuit of Happyness was his favorite one cause it touched people's hearts and made them think of really important things of life – family, friendship, love.

Moreover, he took part in a production of The Pink Panther 2, the faith-based film Not Easily Broken, The Ugly Truth, Whitney Houston's Sparkle, The Karate Kid and Jumping the Broom. That time Franklin was named one of the youngest and most influential executives.

In 2012 Franklin got the title of Senior Vice President of Production – it was a great success.

He adapted the New York Times Bestseller Heaven is for Real into a feature-length film. He read the book in one sitting, was impressed by the plot and the message. The story especially touched him because he lost his dad as a baby – and the story told about losing loved ones. The movie's production cost $12 million. The picture became one of the highest-grossing faith-based movies of all time.

Also, as a Vice President, Devon Franklin reimagined the classic story Annie. So, he developed the script, ruled the production and the promotion of this picture.

The same year, Franklin worked on the hit film Miracles from Heaven, based on the book Miracles from Heaven by Christy Beam. Among its actors, there are Jennifer Garner, Queen Latifah, Kylie Rogers, Martin Henderson, John Carroll Lynch, and Eugenio Derbez. Movie's plot is about Beam's daughter who had a rare, incurable disease but became cured after a freak accident. The picture got mixed reviews but brought its directors $73 million. Besides, the movie was nominated for Favorite Dramatic Movie in the People's Choice Awards, Best Actress in the Teen Choice Awards, and won the award for Best Movie for Drama in the Teen Choice Awards Choice.

DeVon Franklin also produced the animated film The Star – the story about a donkey and his friends-adventurers. One more Franklin's work is Breakthrough, for 20th Century Fox.

Besides producing movies, Franklin is a preacher – he started doing it at the age of 15. He often appears on The Dr. Oz Show where he performs with a speech about faith, relationships, life expectations and spiritual wellness.

DeVon Franklin’s net worth is evaluated at $12 million.

In his life, Franklin has tried out writing. He has written the following books:

The work tells readers how faith, life, and work all interact and are parallel. It is also about how to build a career without compromising your faith. The main idea of the book is, you don’t have to compromise your faith to follow your career dreams. The author teaches us to discover The Big Idea for your life, improve your career to the next level, recognize the signs by God.

The work was created alongside Franklin's wife, Meagan Good. There the two tell their story about waiting until marriage. It was released in February 2016 and soon became a New York Times bestseller in several categories. The book describes the most important moments from their relationship and advice on how waiting can transform relationships, talks about finding true love through celibacy, as well as the benefits of delayed gratification in all walks of life (professional, personal, spiritual etc). The couple use their own personal story of waiting as an example.

The story tells the secrets how to succeed in life, career, relationship, etc.

DeVon Franklin has a wife – Meagan Good. They started dating in 2011, when he was at Columbia Pictures, and tied the knot on June 16, 2012, at the Triunfo Creek Winery in Malibu. The couple lives in L.A. now. Together, the two appeared on Black Love, a documentary which premiered on OWN on August 29, 2017. The spouses like hanging out with Kirk Franklin and his wife Tammy.

On Valentine's Day in 216, the couple spoke at an event that took place at One Church Los Angeles to promote their new book. One woman criticized Meagan for her clothing which she found vulgar. The latter was brought to tears, and Franklin defended his loved one.