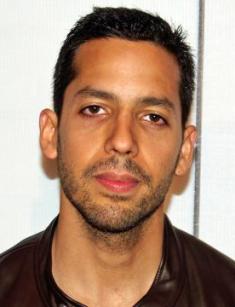 Blaine was twenty-three years old when Street Magic first aired on ABC. The magician turned the camera around on the people watching instead of the performer, to make the audience watch the audience. Viewers were amazed at the sincere reaction of the audience in the studio. After the premiere of Street Magic, the New York Times stated that Blaine "has taken a craft that's been around for hundreds of years and done something unique and fresh with it," and The New Yorker declared that "Blaine saved the magic."

David Blaine White was born in Brooklyn, New York, on April 4, 1973. The illusionist is of Asian, European, and American descent. David's mother is of Jewish ancestry and emigrated from the Soviet Union to the United States, where she worked as a teacher. Blaine's father William Perez is a military man, a veteran of the Vietnam War, and a native of Puerto Rico.

When the boy was ten years old, his mother married John Bukalo, and the family moved to New Jersey. David went to school with his half-brother there.

David has said in an interview that in childhood, his mother often showed him card tricks. The boy was delighted with this "magic" and soon began to study the art of mystification on his own. At the age of five, David showed tricks to passers-by on the street and received money for this. According to Blaine, he significantly contributed to the family budget even then.

It is not known whether David Blaine graduated from high school or not.

At the age of 12, David Blaine decided to connect his life with magic tricks and began to travel around the country entertaining passers-by. At the same time, the young magician had the first foreign tour, when the boy went to Haiti, where he showed his best card trick. The boy suggested that a passerby pick a random card from a deck of cards, put the deck in a special bag, and then throw it on the glass, where the hidden card invariably appeared.

For a few years, David improved his skills and learned new tricks. Then he presented a new show in Las Vegas. There, Blaine surprised the audience with reading minds and bringing dead birds back to life. After the premiere, fans of the illusionist came to the hotel, where the magician and his mother stayed. According to the mother, the floor of the hotel was covered with bouquets with messages from enthusiastic admirers of her son's talent. After such a resounding success, casino owners helped the young magician open his theater.

On May 19, 1997, the illusionist's show David Blaine: Street Magic premiered on television, in which the illusionist showed amazing tricks, and the audience was invariably amazed.

In the 1990s, Blaine developed a unique trick for that time, which made him famous all over the world. Even recognized wizard David Copperfield admitted that Blaine was challenging the devil. According to people, a stunt titled "Buried Alive" was a feat that even the famous Harry Houdini did not dare to accomplish.

In 1999, people around the world bated their breath when David Blaine was entombed in a plastic box underneath a 3-ton water-filled tank for seven days. Throughout the week, the magician did not eat, drank only two to three US tablespoons (30 to 44 milliliters) of water a day, and used only a hand buzzer to communicate with the outside world. 75,000 viewers watched the appearance of the magician from the container seven days later.

A year later, people saw an even more amazing trick of the desperate magician. Blaine's stunts continued to defy the boundaries of human endurance, each one becoming more death-defying than the last. For a stunt called Frozen in Time, Blaine stayed in a large block of ice located in Times Square.

When he was removed with a chainsaw after almost 64 hours, The New York Times reported, "The magician who emerged from the increasingly unstable ice box seemed a shadow of the confident, robust, shirtless fellow who entered two days before." However, the stunt was a rating bonanza for ABC. David then upped the ante even further with "Vertigo," standing atop a 100-foot tall pillar in Bryant Park for 36 hours without a safety net, then leaping into a stack of cardboard boxes on live television.

When Blaine was sealed inside a box above the River Thames without food for 44 days, the stunt attracted the attention of the whole world. The New England Journal of Medicine published a paper that documented his fast, which resulted in the loss of 25% of his body weight.

For "Drowned Alive," Blaine spent one week submerged in a sphere-shaped aquarium at Lincoln Center. Then his name became the most widely searched on Google, and the scientists from Yale University conducted a study to determine the human physiological reaction to prolonged submersion.

Blaine, meanwhile, continued to break a Guinness record for breath-holding on The Oprah Winfrey Show, where the illusionist held his breath for 17 minutes.

In 2013, the documentary David Blaine: Real or Magic showing his unique abilities was released. The film is still popular, especially with people trying to solve the secrets of the magician.

Nevertheless, there are descriptions of David's popular tricks on the Internet, which describe in detail their technique and necessary equipment. It reveals the tricks of the illusionist, but he does not fall short of his merits, performing stunts that push the limits of the human body.

The magician has worked with every American president, including Barack Obama, Bill Clinton, and George W. Bush, as well as international leaders and prominent figures such as Henry Kissinger, Michael Bloomberg, Stephen Hawking, Muhammad Ali, and others.

The magician prefers not to tell the details of his personal life. Reporters only know that David Blaine has liked the American model and actress, Josie Maran. However, the fact that Josie is married with two daughters raises questions about the credibility of the information.

Nowadays, David is not married and has no girlfriend. Moreover, there are no compromising photos of Blaine with women on the Internet.

Blaine's latest trick was called Electrified: One Million Volts Always On. For 72 hours he stood on the pillar surrounded by seven Tesla coils producing an electric discharge

In January 2017, an accident occurred on David's TV show Beyond Magic. The illusionist showed a trick where the magician planned to catch a bullet in a small metal cup in his mouth. But during the performance, Blaine was injured and urgently hospitalized.

In October 2017, media reported that David Blaine was accused of raping. Model Natasha Prince went to the police and said that she met David at a club in London in 2004, after which the young illusionist invited the woman to a private party, where he offered a cocktail. After drinking the cocktail, Natasha and David went to the bedroom. According to her, they wanted to talk, but the woman suddenly felt ill.

When Prince was almost unconscious, David Blaine raped her. Natasha filed a police report against David 12 years later in 2016. According to the model, she could not do it earlier due to a guilt trip because she liked David. The illusionist denied the allegations of Natasha Prince but withheld comments. Now the investigation is underway.

David Blaine has a net worth of $12 million.