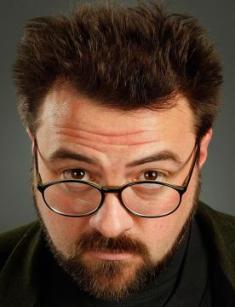 American actor Kevin Smith became famous after the release of the film Clerks, which he also produced and directed. Fortune smiled upon the man who had dreamed of an acting career since childhood, and thus, could achieve the cinema stardom.

Kevin Patrick Smith was born on August 2, 1970, in Red Bank, New Jersey. Although Kevin was not the only child in the family, the future actor was never left to his own devices. The parents kept a wary eye of the three children’s activities, preventing them from sloping around. From a young age, Kevin was fascinated by the beautiful world of cinema.

In school, he was the cameraman of the basketball team. His relatives and friends, and even the teaching and coaching staff admired his videotapes. After graduating from a high school, Smith went to Canada. In Vancouver, the active young man entered the film school. However, he did not become interested in studies. The man watched movies day and night. Having seen numerous films for four months, Smith particularly liked the low-budget film Slacker directed by Richard Linklater.

Later, the screenwriter admitted that he planned to make his debut film of the same genre. After the expulsion, the young man returned to his hometown, where he got a job at a local hypermarket. It was the position of a salesman that inspired Kevin to write the screenplay for Clerks. Smith understood that the movie needed a budget. To keep costs as low as possible, Kevin invited amateur actors and his friends. The action took place in a supermarket where he worked during the day, so the scriptwriter did not have to rent a room.

Clerks debuted at the Sundance Film Festival. Miramax, with which Smith has repeatedly collaborated, bought the film for $ 250,000 exceeding the cost by more than ten times. The movie, which pleased viewers and critics, was a box office success, grossing $3 million worldwide. The comedy Mallrats was released in 1995.

The film about the life of entirely different friends featured Smith, Shannen Doherty, Jason Lee, Joey Lauren Adams, and Ben Affleck. Despite the outstanding cast and a reasonable budget, viewers did not appreciate the film, and it was a box office flop. The latest film of the trilogy, Chasing Amy, was released in 1996. The movie, which tells the story of a man who fell in love with a bisexual, won the Golden Globe Award in 1998.

In 1999, Kevin’s filmography included the film Dogma, which touched on the religious theme. The story centers on two fallen angels, Loki (Ben Affleck) and Bartleby (Matt Damon), eternally banished from heaven, but they try to re-enter Heaven. They are prevented from returning by Metatron (Alan Rickman) – a seraph, and the voice of God, Rufus, (Chris Rock), the thirteenth apostle, the Muse (Salma Hayek), now working as a stripper, two foretold prophets, Jay (Jason Mewes) and Silent Bob (Kevin Smith), and also the last scion, a distant but direct blood relative of Jesus, a girl named Bethany (Linda Fiorentino).

Later, the screenwriter made a film entirely devoted to the two prominent characters. The movie Jay and Silent Bob Strike Back was released in 2001 and won the love of viewers around the world.

Kevin has tried not to tell about his relationship with women. Despite the actor’s efforts not to make his private life public, journalists have always managed to find the information regarding Smith’s girlfriends. So, during the filming of the comedy movie Chasing Amy (1996), the screenwriter dated actress Joey Lauren Adams, who played the title role.

The young people managed to hide their relationship for a couple of months. According to the film crew, Kevin and Joey never showed their feelings in public. On the set, they devoted themselves only to work. The lovers hid their relationship away from prying eyes. The couple broke up after the release of the film. One year later, Smith met his future wife, Jennifer Schwalbach, a reporter for USA Today. She interviewed him when the media spread the rumor that Kevin was the real scriptwriter of the film Good Will Hunting.

The young people liked each other and began to live together a month after they had met. Smith's friends believed that such a hasty decision would not lead to anything good. However, they were wrong. In April 1999, the filmmaker’s wife gave birth to a daughter, Harley Quinn. According to Kevin, he came up with the name for the heiress. The producer named the girl after the supervillain from the Batman comics.

It is worth mentioning that the family life did not put an end to Adams’s career in journalism. The screenwriter has never wanted his wife to be a homemaker. Moreover, the director offered his wife to star in his films, Jay and Silent Bob Strike Back (2001) and Jersey Girl (2004). After that, Jennifer’s acting career took off. The woman starred in 11 more films, and also tried her hand in producing and directing.

Kevin is one of the few filmmakers who finds time for both family and fans. Smith regularly communicates with fans on the Internet and also organizes his own festival Vulgarthon in Red Bank. In addition to his wife and daughter, actors Ben Affleck, Jason Mewes, Brian O'Halloran, Jason Lee, Chris Rock, and Matt Damon also attended this event. Moreover, in his hometown, the founder of View Askew Productions opened a comic book store called Jay and Silent Bob's Secret Stash, which continues to work, unlike the branch in Los Angeles, which was closed in January 2009.

In February 2017, on his official Facebook page, Smith posted a screenshot of a cover page of a script. He wrote that in the summer of the same year, he would start shooting the cult comedy film, telling about the adventures of two best friends, Jay and Bob. The new film Jay and Silent Bob Reboot will become a satire on the Hollywood film industry, which since the mid-2000s has been obsessed with creating remakes.

In 2018, Clerks III will also be released. It is noteworthy that the director promoted his project, starring Rosario Dawson, Jason Mewes, Brian O'Halloran, in the TV series The Big Bang Theory in April 2015, inviting the title character of the TV series, Penny (Kaley Cuoco), to play in the upcoming movie.

Nowadays, Kevin is immersed in work on the film Jay and Silent Bob Reboot. On Instagram, the eminent producer regularly posts photos of the film set and keeps fans informed on the events related to the movie. It is worth mentioning that social networks are not the only source of the latest information about the life of the director. The content related to the actor’s career is also often published on various Internet portals and in print media.

Kevin Smith has an estimated net worth of $25 million.