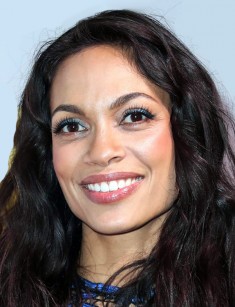 Rosario Dawson is an American actress, who has got 108 performed roles in her filmography. Men in Black II, Seven Pounds, Alexander and Trance are the most famous works of the actress. Rosario Isabel Dawson was born on the 9th of May, 1979 in New York in the family of the writer Isabel Celeste - the successor of Puerto Ricans and Afro-Cuban ancestry.

Rosario was born when her mother just turned 16 years. When Rosario’s biological father Patrick Harris found out that Isabel was pregnant, he left her and refused to accept their future child. A year later the woman got married to the Irish - Greg Dawson who adopted Rosario and became her father. In 1983 one more child was born in Rosario’s family: Isabel gave birth to her son who was called Clay. When the future actress turned five years, her family moved to the abandoned building on the Lower East Side of Manhattan.

Greg wanted his children to have the best life. He was engaged in the repairs and renovation of the apartment. He has extended electricity and plumber. The spouses divorced in 2001. The stepfather not only left the house to his ex-wife but stayed in good relations with his stepdaughter as well. During her school days, Dawson repeatedly took part in the episodes of the children's program Sesame Street. At the age of fifteen, the girl with bright appearance was noticed by the photographer Larry Clark and scriptwriter Harmony Korine. The colleagues have come to the conclusions that Rosario was ideal for the role in their future movie.

Dawson debuted in the picture Kids about unsuccessful teenagers who have nothing to do and use the drugs. The performer of the leading male role Justin Pierce committed suicide five years later, and two girls who had participated in the shootings - Chloë Sevigny and Rosario Dawson, became professional actresses. Three years later Rosario took part in the sports drama He Got Game directed by Spike Lee. In this movie, she worked on the film set together with Denzel Washington and Milla Jovovich.

The fantastic comedy Men in Black II has brought popularity to the actress. Except for her, Tommy Lee Jones, Will Smith, and Lara Flynn Boyle took part in this movie. In 2002 Dawson had a resounding failure in her career: together with Eddie Murphy, they performed in the most financially unsuccessful picture of all times – The Adventures of Pluto Nash. With the budget of $100 million in the world hire, the movie earned just $7 million.

In 2004 the actress enriched her filmography with the role in the peplum – Alexander of Macedon. In the picture directed by Oliver Stone, the actress embodied the character of the bride of the eminent commander Alexander of Macedon. The end of 2000-s has been successful for the actress: she took part in the thriller Eagle Eye with Shia LaBeouf and Billy Bob Thornton in the leading roles, in the drama Seven Pounds and voiced over the character of Artemis in the animated series Wonder Woman. In 2010 Dawson got the role of the goddess Persephone in the full-length fantasy Percy Jackson & the Olympians: The Lightning Thief.

In 2013 Rosario hypnotized James McAvoy in the thriller Trance directed by Danny Boyle. This picture tells a story about the auction employee who was involved in the criminal frauds and Rosario received the role of the psychotherapist called Elizabeth.

In 201 the actress enriched her filmography with the roles in the series Daredevil, Luke Cage, and Iron Fist. In April 2017 the thriller Unforgettable came out on the big screens in which the character of the actress Katherine Heigl decides to turn the life of the new wife (Rosario Dawson) of her ex-husband into the hell.

It’s known for sure that Dawson wasn't married. Since 2004 till 2006 the actress was in relations with the actor of the provocative series Sex and the City - Jason Lewis. The lovers didn’t hide their mutual sympathy and were always close to each other. In the photos which were published in printed editions at that time the artists appeared embracing each other. The news about the break-up of the Hollywood couple shocked the admirers of the celebrities. None of the European editions wrote about the reasons for their parting. Their admirers have assumed that they had separated because of different plans for the future life.

After that, the charming brunette was told to have love affairs with Aaron Stanford, with Nick Stahl, and even with Joshua Jackson. In 2012 the tabloids were full with the headings about new beloved of the actress. On the movie stage of the Trance, the director Danny Boyle and Rosario Dawson began to have a love affair. The couple didn't hide their feelings. By the words of the service personnel, the lovers didn't hesitate to express their emotions and passions. They kissed and embraced each other many times before the eyes of the film crew.

It’s worth noting that nobody believed that these relations would last for a long time. These people had a solid age difference and very different tempers that's why their relationships were destined to come to an end soon. As a result, their couple has existed less than a year as it was predicted by their fans. Passionate Rosario and romantic Boyle who have proved that the opposites attract haven't changed themselves for the sake of their future together. They have preferred their life without limitations and restrictions to the perspective of having a family.

Since then there was no information about the personal life of the actress for several years. In 2016 the press began to discuss Rosario's relationship with Eric Andre – an American actor, comedian and TV host known to the audience of the whole world due to the role of Dick in the series 2 Broke Girls. In February of 2017 Rosario and Eric officially announced that they had relations. Now they live together and bring up the girl adopted by Dawson in 2002.

In August 2017 the cross-over mini-series The Defenders will come out on the screen. The plot of the picture is based upon the series of the same-name Marvel comics. The leading character of the movie is Daredevil (Matt Murdock), Jessica Jones (Krysten Ritter), Luke Cage (Mike Colter) and Iron Fist (Danny Rand). In this series directed by Sarik Andreasyan Rosario received the role of the superheroes’ friend – the nurse Claire Temple.

Already at the end of 2016, there appeared the information in the press that Dawson would join The X-Men Spinoff project - The New Mutants in which she would receive the role of Dr. Cecilia Reyes. In July of 2017, the rumor about Rosario’s participation in this movie was refuted. According to the official data, the actress of the film I Am Legend - Alice Braga will perform the character of Reyes in this action movie about the superheroes. The shootings of The New Mutants will start at the end of August. The picture is expected to come out on the screens on the 12th of April, 2018.

Also in 2018, the spectators will be able to see Dawson in the comedy under the title Clerks III which tells about the everyday life of two friends Dante Hicks and Randal Graves who are losers. In this picture, the actress has tried an image of the girl called Becky with whom Dante has secretly fallen in love.

Despite the hard working schedule, the actress who is 170 cm tall and weighs 60 kilos remembers about her admirers. On her Instagram page, Rosario regularly publishes photos from the concerts and movie screenings and also clips from her vacations. The social network is not the only source which tells the fans about the news from Dawson's life. The materials connected with the creative career of the Hollywood star are often published on different web portals and in printed media.