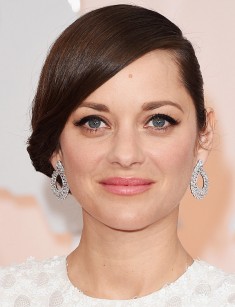 Marion Cotillard is a French actress, known to the public due to the role of Edith Piaf in the film "La Môme", as well as participation in the films "Taxi", "Inception" and "Macbeth." She is the first actress after Sophia Loren, who received Oscar, playing the role not in English.

Marion Cotillard was born in Paris to a creative family. Jean-Claude Cotillard, the father of the future celebrity, was an actor-mime and theater director who created the family troupe "Cotillard." Later Jean-Claude also taught acting at the High School of Dramatic Art, and later worked as a director of this university.

Her mother Niseema Theillaud is an actress of cinema and theater, together with her husband she teaches students, and also promotes beginner actors. Marion was the eldest child in the family. Two years after the birth of their daughter, twins Quentin and Guillaume were born. They also became creative people: Quentin became a sculptor, and Guillaume became a writer.

The girl felt confident in her family, but she had difficulties with her peers. At the age of 6, the theater has become her hobby, in which Marion spent a lot of free time attending rehearsals of her mother or father.

Soon after the birth of the boys, the family moved to Orleans, located in central France. There, the little Marion studied at the Victor Hugo Women's College, then at the Voltaire's Orléans Lycée. She also studied classical dances and vocals from private teachers. Marion graduated from the Moliere Paris school, where, in addition to general education program, she studied acting skills.

After receiving the diploma, Cotillard entered the Orleans High School of Dramatic Art, which was headed by her father. On the stage, the actress achieved great success, playing in many performances. For the play "Discontinued Deed", the actress received a prestigious theatre "Tony" award.

In the movie, Marion Cotillard debuted in 1994 as Matilda in the French melodrama "The Story of a Boy Who Wanted to Be Kissed." This film was the first in the creative biography of the actress.

The actress attracted attention of movie fans in 2 years, after starring in the fantastic comedy "La belle verte" in the role of Masha. But fame came to the actress in 1998, after the release of the comedy action movie by Luc Besson "Taxi". Marion plays Lily Bertino, a friend of the extravagant driver Daniel. Later the actress appeared in two sequels of this blockbuster "Taxi 2" and "Taxi 3".

The actress became even more popular among French lovers of cinematography after the musical comedy "Pretty things." In this film, the actress has two roles at once: Marion plays twin sisters Marie and Lucy, who apart from the appearance have nothing in common. For this film, the Frenchwoman used her vocal skills, since both characters are singing according to the script.

Cotillard received the worldwide fame in 2007, when the musical drama "La Belle Verte" was released, a biography of the legendary French singer Edith Piaf, whose role was played by Marion. The name of the film comes from the famous song La Vie En Rose, which became the main composition in the repertoire of the singer.

Marion Cotillard could dramatically and sensually show the life of Edith Piaf, receiving positive reviews of European and American film critics. For this work, the actress received "Oscar" at the 80th award ceremony.

Belgian film of 2014 "Deux jours, une nuit" repeated the success of this film. In this drama, Cotillard plays Sandra - the woman in difficult situation, whose colleagues vote for her dismissal in order to receive the annual bonus. The actress managed to realistically demonstrate the whole range of feelings of a person who fell into a difficult life situation. For the role of Sandra Marion was nominated for Oscar. The actress also received the main award of the European Film Academy.

But the actress was famous not only in French cinema. Cotillard played in many Hollywood movies. Critics and viewers name four of the most significant roles in American films.

In the fantastic thriller "Inception" Marion Cotillard got the unusual role of the dead wife of the main character, who after death continues to follow her husband in dream world. The partner of the actress was the legendary American actor Leonardo DiCaprio.

The French actress also appeared in the superhero action movie “The Dark Knight Rises” by Christopher Nolan, which appeared on the screens in 2012. In this film, a lot of Hollywood stars played. Marion got experience that was useful in future.

In the drama "The Immigrant" about America of 1920s, the actress is transformed into a Polish immigrant who came to the US in search of a better life and faced hatred toward foreigners.

In the tragedy "Macbeth" of 2015, which is a screen version of the play of William Shakespeare, Marion Cotillard took the role of Lady Macbeth, the wife of the insidious Scottish lord, who wanted to become a king. It is interesting that Natalie Portman also claimed for this role.

One of the last works of the actress in French cinema was the film "Mal de pierres." The film by Nicolas Garcia based on the novel of the same name by Milena Agus.

Also, Marion Cotillard tried herself in voicing. In the animated film "Le Petit Prince ", she voiced a rose, which was left by the main character on his planet.

In late 90's Marion Cotillard had relations with the French actor Julien Rassam. Later, she had romantic relationship with the actor Stefan Guerin-Tilly and the singer Mathieu Blanc-Francis, better known under the pseudonym Sinclair.

In 2003, on the set of the melodrama "Jeux d'enfants", the actress met the actor and film director Guillaume Canet. Marion and Guillaume not only played a couple in the film, but also moved romantic relationship into real life. Marion and Guillaume were seen from time to time, as Guillaume was at that moment married to German actress Diana Kruger.

After Canet divorced, Marion began to live with him in a civil marriage. In 2008, the couple announced an engagement, but the celebrities didn’t have a wedding. In May 2011, their first-born Marcel Canet was born.

The actress likes to collaborate with her favorite musicians. Marion starred in David Bowie's video “The Next Day”, Franz Ferdinand's “The Eyes of Mars”, “More than meets the eye” of the French singer Yodelice and “No Reason To Cry Out Your Eyes” of the Canadian rock musician Howksley Workman.

Marion Cotillard fights for the protection of the environment, represents several such as Greenpeace. As a part of these organizations, the actress took part in actions around the world.

In September 2016, the Daily Mail reported that Marion Cotillard and the American actor Brad Pitt have relations. Such reports in the British press about relations between two movie stars of the first magnitude appeared after the participation of the Frenchwoman in the thriller "Allies". Soon the actress herself stated that this information was not true, and called such rumors groundless.

The actress's pregnancy became the reason for rumors about the relations with Pitt. The French media counted that the actress's child was conceived at the pick of filming in the "Allies".

In spring of 2017, Marion struck the fans by publishing new pictures in Instagram. All the same, fans who dreamed of seeing photos of a naked actress, did not wait for such images from their idol. Cotillard posted some photos, where she poses in an unusual image. In the photo, the actress has big lips, the celebrity appears with long black hair, and also in an unbuttoned shirt.

Today Cotillard actively participates in the filming. In 2017, with the participation of a Frenchwoman, films "Forever Young" and "Les fantômes d'Ismaël" were presented. The film "Forever Young" was especially remembered by the audience, as Guillaume Canet, the civil husband of Marion Cotillard, was the director of this film.

According to the critics, the film "Forever Young" is a new level of the satire genre on celebrities. In this film, Canet and Cotillard played themselves on the screen. In addition, the creator of the film called other actors from France who also appeared in the cameo.

The picture tells about the crisis of middle age and the 42-year-old actor, who is destructively analyzing his ego. This is accompanied by amusing jokes about the entertainment industry, which the fans of French cinema liked. And at times, the playful and zealous game of a married couple could promote this local cinema to the world market. 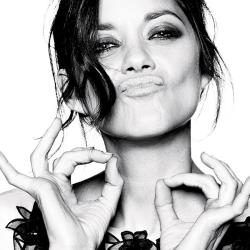