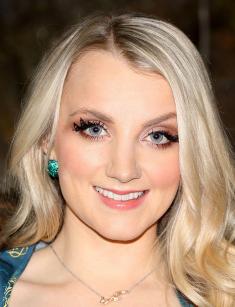 The role of Luna Lovegood in the Harry Potter fantasy gave birth to another Hollywood star, Evanna Lynch. The saga made the young woman one of the top actresses. Although fans are afraid Evanna may remain a one-role artist, Lynch does not seem much concerned about it: she participates in theater performances and new movies.

Evanna Patricia Lynch was born at the end of summer 1991 in a picturesque Irish village in County Louth, Ireland, famous for its agriculture and tourist attractions. The girl’s parents had nothing to do with art; the father worked as a teacher in a Catholic church for girls. Evanna has two sisters and a brother.

The would-be celebrity was an ordinary Irish girl and dreamed of fame and romances. She desperately wanted to be as perfect as TV models; the girl was diagnosed with anorexia at the age of eleven and hospitalized. However, bitter pills did not upset Evanna – she was going to miss a new Harry Potter book release.

Doctors allowed Lynch to go to a meeting with Joanne Rowling; she was the legend and authority for Evanna. The girl was excited to receive the long-awaited book with the author’s autograph. Inspired, she wrote a letter to Joanne and told her about her health issues and the dream to play in the screen adaptation of her favorite novel.

Rowling found some time to answer the letter and encouraged the little Harry Potter to pull herself together, defeat the disease, and go to the movie set. The writer’s support was decisive in Lynch’s life: two years later, in 2005, she fully recovered.

Evanna went to Cartown National School in Termonfeckin and continued her education in Our Lady's College in Drogheda where her father worked as a headmaster’s assistant. In 2008, the girl enrolled at the Centre for the Talented Youth of Ireland and studied drama and speculative fiction for two years. In September 2010, Lynch got accepted at the Institute of Education.

In February 2006, 14-year-old Evanna learned about the auditions for the role of Luna Lovegood and asked her father to accompany her in London. The girl had to compete 15 thousand actresses – and won. Rumors have it Rowling said:

Evanna expected to be given the role: she had a phone call from the studio; a manager asked to keep the shape and color of her eyebrows. Lynch’s elder sister concluded it meant success. The next week, the young artist received her part in the project.

In 2007, the audience saw the blonde character (Evanna had her hair dyed) and fell in love with her. She was the picture of Luna as Rowling and the project creators imagined her. Later, Lynch learned that the producers David Heyman and David Barron agreed to work with a non-professional who would be unpredictable and natural: it was necessary to be Luna, not play her. Evanna did her job splendidly.

Later, the artist confessed the weird girl was close to her: Luna was self-sufficient and did not seek recognition or approval of her actions. She behaved the way her heart told her; it was the true wisdom, and no eccentric features could spoil it. The actress collaborated with Daniel Radcliffe, Tom Felton, and Emma Watson; she became friends with Bonnie Wright who personified Ginny.

The actress was working on the Harry Potter saga until 2011 and appeared in four parts. Critics and fans called her one of the brightest figures. The woman not only worked in front of cameras but also designed the characters’ jewelry.

2012 brought the premiere of the adventure series Sinbad starring the British actor Elliot Knight; Lynch got the role of Alehna. The next year, fans saw their favorite as McKenzie Pryce in the American comedy GBF with Michael J. Willett and Natasha Lyonne. In 2015, the actress played eccentric and naughty Bridget Riordan in Danny and the Human Zoo.

Besides, the Harry Potter star appears on the theater stage. In spring 2013, she participated in the play about the illusionist Harry Houdini and played his wife and assistant.

Evanna has an Instagram page and regularly posts photos. She loves cats and publishes dozens of funny pictures with them. More than two million people follow her.

Fans try to understand what is going on in the artist’s personal life judging by her photos. The actress used to date her colleague Robbie Jarvis; both of them were vegetarians and collaborated on Harry Potter.

Nobody knows how long the couple had been dating. Fans learned about their romance in 2015; there were romantic pictures on the celebrity’s Instagram. Perhaps, the young people fell in love at the movie set. At the end of 2016, the actors announced they split up and remained friends. They continue to visit parties and social events together; however, they are no longer dating.

Now, Evanna Lynch is an energetic person and a famous social activist. In 2010, the young woman fundraised for people with multiple sclerosis; later on, she protected the rights of farm rabbits and stood for same-sex marriage legalization.

The actress does not eat meat and promotes vegetarianism. In 2018, before Christmas, she advertised vegan gifts for friends and families: plant-based products and snacks in the Harry Potter style. Besides, Evanna Lynch is a spokesperson for the products created by the international organization PETA.