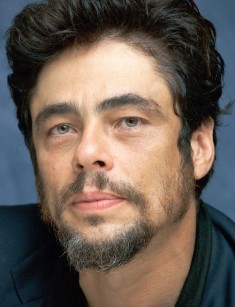 Benicio Del Toro is a Hollywood star, whose authority and talent are entirely out of the question. Each movie with the participation of the actor is a little cinematic masterpiece. His acting is an improbable mixture of expression, passion, male charisma and talent.

Benicio was born in February of 1967 in the capital of Puerto Rico. The future actor had Catalan and Basque roots.

In the family of the famous lawyer, Gustavo Adolfo who was well-known in San Juan there grew up two sons: younger Benicio and Gustavo who was two years older.

It’s noteworthy that the actor’s surname is one of the most widespread in the Spanish language. It is translated as a "Bull."

When Benicio Del Toro turned nine, his mother died of hepatitis. The brothers moved to their relatives to Pennsylvania. Benicio spent his youth in the town of Mercersburg. Here he finished the school. At first, the boy had problems with communication because of the language barrier. He managed to deal with the new language due to the sport and music. But the fact that Benicio has overcome the difficulties turned out to be useful for him: then he understood that he could cope with any problems.

As Del Toro didn’t have any particular hobbies, his father sent his younger son to study at the business school. Gustavo chose medicine, and at present, he works as a children's oncologist on Manhattan.

Benicio Del Toro has shown his fancy for the theatre during his studies at San Diego State University. He began to attend the evening acting school and understood that he liked this occupation more than others. That's why Benicio left the university after the first year of the studies and set off for New York. But he wasn’t successful in his studies at the Circle Square Theatre School. Later, Del Toro moved to Los Angeles.

Benicio Del Toro began his cinematic career in 1987. After he had attended some auditions, at last, he was successful. The beginning actor was entrusted with the episodes in the series Miami Vice and Private Eye.

Benicio Del Toro became recognizable two years later when he played the bodyguard in the sequel of "Bondiana" – in the movie Licence to Kill. Since that time Del Toro began to receive significant roles in Hollywood projects. He appeared in the first director's work of Sean Penn - The Indian Runner and in the high-rating pictures Money For Nothing, Fearless and China Moon.

Benicio received his first leading role in 1995 after which he became a star. It was the thriller The Usual Suspects which has brought to the actor fame and his first award – the prestigious Independent Spirit Awards. In a year Benicio Del Toro enriched his assets with one more honor for his role in the movie under the title Basquiat. Del Toro's fees were increasing quickly as well as the parts offered by Hollywood directors.

As it turned out in 2001, Del Toro’s previous success became the prologue to the extreme fame which fell upon the actor after the release of the movie Traffic. For the role which Benicio Del Toro had brilliantly performed in this picture, he received SAG Awards, Golden Globe Awards, BAFTA Awards and Berlin Golden Bear Awards. But what is the most important, the picture Traffic has brought Benicio his first Academic Awards.

At the same period, Del Toro refused the role of Frida Kahlo's husband in the movie Frida because it was demanded to put on the weight for the shootings.

Guardians of the Galaxy, 21 Grams, Sin City, Things We Lost in the Fire, Che, 7 Days in Havana, The Wolfman – the movie lovers of the world know well these titles of the films with the participation of Benicio Del Toro.

In the picture 7 Days in Havana, the actor appeared as a movie director.

In 2014 the actor took part in the debut work directed by Andrea Di Stefano under the title Escobar: Paradise Lost. The star of The Hunger Games - Josh Hutcherson performed together with Benicio Del Toro in this thriller.

The same year Del Toro embodied the character of Sauncho Smilax in the comedy-drama Inherent Vice. The picture received the nominations for the prestigious film awards.

Later Benicio has acted in the leading roles in the tapes – A Perfect Day and Sicario.

Benicio Del Toro has voiced over The Snake in the animated series The Little Prince.

At present, the star attracts close attention of the public. Millions of his admirers are looking forward to the new movies with the participation of the actor.

The role of the gloomy macho became characteristic of the actor not only in cinematography. The personal life of Benicio Del Toro consists of a couple of bright love affairs, but none of them has led to the marriage. The beautiful women who thought that they had managed to enchant and to "tame" the actor had to face disappointment each time.

Despite Benicio's confession that love was a drug for the actor he "uses" it, without losing control. Del Toro had a love affair with a beautiful woman and daughter of two celebrities - Chiara Mastroianni. Then he had relations with Alicia Silverstone and Valeria Golino. With the last woman, the actor almost decided to get married though it didn't happen.

The actress Kimberly Stewart moved further than other beauties: she gave birth to the charming daughter from Benicio called Delilah. But even this circumstance hasn't changed the star’s desire to remain an enviable bachelor.

Though the actor didn’t continue the relations with Stewart, he takes an active part in his daughter's life.

The actor doesn't have accounts in the social networks. At least, he doesn't say anything about it. But Benicio's admirers lead fan pages of their favorite actor on Instagram where they publish shots from the movies and pictures found on the web.

Since young years Del Toro admires Muhammad Ali, and he really respects the artists, Andy Warhol and Pablo Picasso. What about the actor, he is fond of painting and photography.

Moreover, since childhood, the actor enjoys playing basketball. And at present, he quite often plays basketball with his friends.

Besides, Benicio loves music. It helps the celebrity to be oriented to his role and to keep calm.

In January 2017 there was premiered the movie directed by Martin Scorsese under the title Silence. The director was thinking over this idea and was dreaming to realize this picture for thirty years. In 2011 he invited Daniel Day-Lewis, Gael García Bernal, and Benicio Del Toro to play the leading roles. But the movie production was prolonged so much that all the three actors refused to take part in the project.

The critics have warmly met the long-awaited movie, but it was a failure in the hire.

But in December of the same year, the actor performed the role of the burglar in the sequel to the cult saga Star Wars: The Last Jedi. The movie became the highest-grossing film of 2017.

The release of the fighter Soldado is set for June 2018. Another title of this picture is Sicario 2: Soldado. The film is the sequel of the movie Sicario of 2015. Benicio Del Toro will return to the role of Alejandro.

In May 2018 the actor will try himself in the role of the Marvel comics' character Taneleer Tivan in the fantastic movie Avengers: Infinity War. This character already appeared in the second part of Thor and the first of the Guardians of the Galaxy.

Infinity War is interesting because the admirers of the Universe will be able to see nearly all principal characters in one movie.

This time Avengers are going to unite forces with the Guardians of the Galaxy and Doctor Strange to fight against Thanos. The villain decided to find all the Infinity stones and to change reality at his own will with the help of them.

Except for the above-mentioned projects, at present Benicio Del Toro works on mini-series Escape at Dannemora and the pictures Incorporated, Agent: Century 21, Trap and Lunar Park. 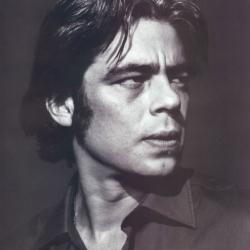