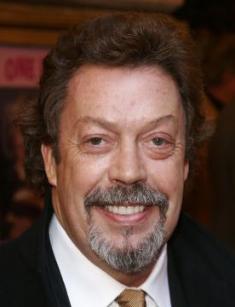 There is a category of actors known to a broad audience, but few of the viewers can remember the names of the movies in which this actor or actress was seen. This category includes Tim Curry. The British actor and singer was born on April 19, 1946. It happened in the town of Grappenhall, located in the Northern part of Cheshire (UK).

Timothy James Curry (that is his full name) was born in the family of a chaplain in the Royal Navy James Curry and his wife, Patricia, a school secretary. Tim became the second child in the family – before the couple had a daughter Judy. In primary and secondary school, the boy was not much different from his peers. However, in high school, Tim changed – the works of William Shakespeare conquered him.

His love for the work of the English poet and playwright led Curry first to Cambridge University, then to Birmingham, and then to the Royal Shakespeare Company (a member of which was also the future three-time Oscar winner, Daniel Day-Lewis). After receiving a diploma with honors, indicating the completion of English language courses and dramatic art, Tim became a full participant in the performances of the troupe.

Although Curry began as a theater actor, he became known for his work in film and television. His filmography includes about two hundred works. For the first time, Tim appeared on the screens during the broadcast of theatrical productions of the Royal Shakespeare Company on television, as part of the shows Armchair Theatre and Play for Today. His full debut took place in 1968, in the musical Hair at the West End, there Curry met a lot of his future colleagues.

The first role that made Tim famous was given to him only seven years later. It was a part in the film The Rocky Horror Picture Show directed by Jim Sharman (Shirley Thompson vs. the Aliens, Shock Treatment, Jesus Christ Superstar). In this movie, Curry played an extraordinary Dr. Frank-N-Furter, who sheltered in his mansion a couple of newlyweds. It is known that in the initial stages of work on the project, this role was to be performed by the vocalist of The Rolling Stones, Mick Jagger.

In the same year of 1975, the audience saw the film adaptation of the work of the famous English humorist Jerome K. Jerome, Three Men in a Boat. At the helm of the project was Stephen Frears ( Dangerous Liaisons, High Fidelity, The Queen), and Tim Curry played the role of the narrator in the film.

Three years later, the actor starred in Jerzy Skolimowski's (The Menacing Eye, Deep End, Four Nights with Anna) movie, The Shout, telling about a man who learned from the Australian aborigines how to kill with a scream. On this project, Curry worked together with Susannah York, John Hurt, and Alan Bates.

In 1980, Tim could be seen in the film Times Square, directed by Allan Moyle (Pump Up the Volume, Empire Records, New Waterford Girl). Times Square told the story of teenagers of the 80s and their problems, worries, and adventures.

In 1982, the viewers got to enjoy another, not the first and not the last film adaptation of Charles Dickens' Oliver Twist), directed by Clive Donner (The Caretaker, Nothing But the Best, Here We Go Round the Mulberry Bush, What's New Pussycat?). Three years later, Curry, along with Tom Cruise and Mia Sara starred in Ridley Scott's (Alien, Blade Runner, The Martian) in the movie Legend - Tim got the role of the Satan-horned Lord of Darkness.

In the same 1985, the film Clue came out, making Tim Curry known to the viewer as a usual suspect. The plot of the film is based on logical board game Cluedo, in the genre of the detective (the predecessor of the Mafia), invented by Anthony E. Pratt in the mid-fifties of the last century. Jonathan Lynn became the director of Clue (Nuns on the Run, My Cousin Vinny, The Fighting Temptations), and Tim Curry played the role of one of the suspects.

In 1988, Curry starred in the comedy movie Pass the Ammo directed by David Beaird (It Takes Two, The Party Animal, My Chauffeur), starring Bill Paxton and Linda Kozlowski.

However, the hit movie of 1990 with the participation of Curry was another movie – It. Tommy Lee Wallace's (Halloween III: Season of the Witch, Fright Night Part 2) television project was an adaptation of the book by Stephen King. Tim Curry got the role of universal evil, embodied in the form of the dancing clown, Pennywise. The children of those years will never forget the smile of the actor.

A fun fact: 20 years later, when people started talking about a new film adaptation of It, the producers again offered Tim the role of the main antagonist, but the actor turned it down. The next candidate was Will Poulter, but he was not able to play the role of Pennywise in this picture because the producers thought that Will was not tall enough for this character (this is interesting, considering that the height of Curry is 5 feet 74 inches, and Poulter's – 6 feet 16 inches). In the end, the role of Pennywise was played by Bill Skarsgård.

After the production of Tommy Lee Wallace, Curry engaged in voicing cartoon characters. In 1990, Tim worked on Peter Pan & the Pirates, TaleSpin, Tiny Toon Adventures and Captain Planet and the Planeteers. In 1991, the actor's voice could be heard in the cartoon The Pirates Of Dark Water: The Saga Begins, Dinosaurs, and Darkwing Duck. The next year, Tim did a voice-over acting in Batman and The Little Mermaid.

Also in 1992, Curry took part in the second part of the movie Home Alone, entitled Home Alone 2: Lost in New York, directed by Chris Columbus, performing the role of the concierge.

A year later, the film adaptation of The Three Musketeers written by Alexandre Dumas, was shot by Stephen Herek (Don't Tell Mom the Babysitter's Dead, 101 Dalmatians, Life or Something Like It). In this motion picture, Tim played Cardinal Richelieu. Also in 1994, Curry again starred in the same movie with Alec Baldwin, it was the Shadow directed by Russell Mulcahy (Highlander, Swimming Upstream, Mysterious Island).

That year could not have passed without working on a couple of cartoons, such as Hey Arnold!, Gargoyles, and Aladdin. Over the next two years, Tim Curry voiced the characters of The Mask: Animated Series, Freakazoid!, Casper the Friendly Ghost, Jumanji, and Batman Beyond.

In 1998, the actor returned to film to play the role of Gomez, the head of the Addams family, in the movie Addams Family Reunion created by Dave Payne (Just Can't Get Enough, Reeker, Under Oath, Alien Terminator).

In 2001, Curry starred in the parody film Scary Movie 2 directed by Keenen Ivory Wayans (Scary Movie, White Chicks), and in another part of the Tales from the Crypt (not to be confused with the television series under the same title, even though Curry starred in it too), titled Ritual.

In 2013, Tim Curry, together with Lance Henriksen starred in the movie directed by Balázs Hatvani, Gingerclown. As in It, Curry played the role of an antagonistic clown, who "is not who he seems."

Tim's single. He was never married. On the Internet, one can not even find a photo of Curry with a girlfriend. There are rumors about his alleged sexual preference. However, there is no evidence for or against these statements.

Other details of the actor's biography are also unknown – as a true Englishman, Curry does not advertise his personal life.

In the spring of 2013, Tim suffered a stroke. Since then, he moves only in a wheelchair.

Tim Curry's net worth is estimated at $14 million. At the end of 2017, the viewers enjoyed a new short movie with Curry's participation, Long Drive Home, produced by Michael J. Berwick.

Besides, the actor can be seen in the television movie The Rocky Horror Picture Show, which is a remake of the 1975's movie.