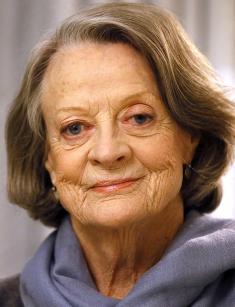 Margaret Natalie Smith is a famous English actress. In the late 1980s, the royal family appreciated the artist’s talent and gave her Dame Commander of the Order of the British Empire, the analog of the noble title “Sir” for women.

The actress has won seven BAFTA awards, two Academy Awards, and four Emmys. Smith is a favorite of the British, American, European, and post-Soviet audience that watched the adventure fantasy about Harry Potter and the family saga Downton Abbey.

Margaret was born in December 1934. She was the only daughter in the family and had elder brothers Ian and Alistair. The future star spent her early childhood in the suburban area of London, Ilford. The family belonged to the intelligentsia: the father, Nathaniel Smith, was a professor at Oxford University, the oldest educational institute in the country.

When the girl turned five, the parents moved to Oxford; the would-be actress attended a girls’ school. Young Maggie dreamed of theater from her childhood, yet the family turned against that idea when their daughter graduated from school: they did not want the 16-year-old woman to leave home.

Maggie gave in to the parents and entered Oxford University. However, she did not stop dreaming of acting and enrolled at the university drama school; soon, she performed on the student stage.

In 1952, Smith debuted as Viola in Twelfth Night by William Shakespeare; the plays Cinderella and The School for Scandal followed. The performances with Maggie were immensely popular among the audience; directors and managers were sure that the actress was the talisman that helped any show succeed.

In 1956, the British actress was invited to the Broadway play New Faces '56; in 1963, she was offered a role in Mary, Mary at the famous Old Vic theater in London. The young woman was the prime of the Royal National Theatre in the 1960s. She played Desdemona in Shakespeare’s Othello and collaborated with Laurence Olivier who played the Moor. In 1965, the play was adapted to the screen, and the actress received her first prizes.

In 1958, Maggie Smith debuted in cinematography and gained the lead role at once: she personified Bridget Howard in the crime drama Nowhere to Go. Four years later, the artist participated in the comedy Go to Blazes by Michael Truman. Since 1962, Smith has been starring in movies frequently; she works on two or three projects annually.

Five years later, the comedy melodrama The Prime of Miss Jean Brodie was released. The actress personified a private school teacher Jean Brodie. This role brought Smith BAFTA and The Academy Award. The work was challenging for her: legendary Vanessa Redgrave had played the same character before. However, both critics and ordinary people agreed that Maggie’s interpretation was equally good.

In the 1970s, Maggie Smith focused on the theater work and toured in the United States. She appeared in classic and modern plays, comedies and dramas; all of them were successful.

Although the actress did not appear on the screen often at that period, each time was priceless for the audience. In 1972, the woman appeared in the American comedy The Millionairess by William Slater based on Bernard Shaw’s work. The director’s decision to give the role of the eccentric millionairess Epifania to Maggie was right: the comedy was triumphant.

The actress received the second Academy Award for the secondary role in the comedy California Suite (1978) starring Jane Fonda and Michael Caine.

In the early 1980s, the action movie Clash of the Titans was released; Smith had another chance to collaborate with Laurence Olivier: they both played the main characters. The story is based on Greek myths; Margaret personified the nymph Thetis.

Four years later, Ivory invited Smith to his new project, the drama A Room with a View. Once again, the cast was full of stars: Helena Bonham Carter and Denholm Elliott.

It was a triumph: the movie makers and cast were showered in prizes. Maggie Smith who played Charlotte Bartlett was nominated for the Academy Award and received BAFTA and Golden Globe Award – Best Supporting Actress.

1999 was successful: the actress appeared in two movie masterpieces, the two-episode drama David Copperfield by Simon Curtis (the screen adaptation of Charles Dickens’s novel under the same title) and the drama comedy Tea with Mussolini. The latter project was created by Franco Zeffirelli. It was premiered in March in Italy; in July, the movie was shown at the Karlovy Vary International Film Festival. Smith got the role of a widow of a British ambassador; her fame increased, and she won BAFTA. Many critics talked about her as a master of grotesque.

The role of Professor brought the actress to the peak of her career. The new generation of viewers, teenagers, got acquainted with Smith and loved her. The first Harry Potter movie came out in 2001. Maggie Smith participated in all parts of the saga (2002-2011).

Among the recent works, the audience especially liked the series Downton Abbey premiered in fall 2010. This family saga shows the atmosphere of England in the early 20th century: the technical progress is made; cars and telephones become widespread; the First World War is taking place; the patriarchal worldview is replaced by the emancipation philosophy.

Maggie Smith played a widow, Violet Crawley, Dowager Countess of Grantham: a wide and perceptive old lady with a great sense of humor. The actress’s character is one of the audience’s favorites; charming Violet Crawley appeared in all six seasons. The project was a remarkable success and was included in the Guinness World Records as the most discussed series.

Young Maggie Smith was incredibly beautiful. Her height was 5.41 ft. (165 cm.), and her weight was 114.64 lbs. (52 kg.). The slim red-haired young woman with big gray eyes could not complain: many men admired her. Eventually, she chose her colleague, Robert Stephens.

They married in summer 1967 when their first child, Chris Larkin, was born. Two years later, the son Toby Stephens was born. However, the family life did not work out well; Maggie and Robert divorced in 1975.

The beauty did not spend much time alone. The same year, she married for the second time; the playwright Beverley Cross became her husband. The couple lived happily until 1998 when Cross passed away. The couple’s children followed in the footsteps of their parents and also became actors.

In 2007, when the sixth part of the Harry Potter saga was filmed, the woman felt sick; she was diagnosed with breast cancer. However, Margaret did not stop working and had a treatment course without interrupting the filming.

The actress Judi Dench is Maggie’s old friend; they got acquainted at The Old Vic theater and became joint at the hip. The artists starred in the movies Tea with Mussolini and A Room with a View together.

At the beginning of 2016, Daily Mirror reported that a full-length movie Downton Abbey would be released; the story would be set ten years later from the last episode. The same year, the actress won another Emmy Award for her work in the series.

In 2018, Smith participated in the documentary Nothing Like a Dame and voiced Lady Bluebury in the animated movie Sherlock Gnomes. 2019 will bring the long-awaited movie Downton Abbey; the artist will personify incomparable Violet Crawley, Dowager Countess of Grantham.