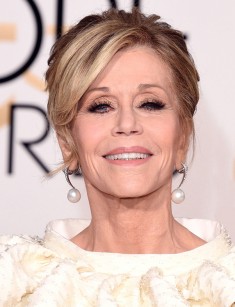 Inimitable Jane Fonda is the true icon of style. Despite her age, the actress continues to appear in movies and series, and her photos appear on covers of the most popular magazines. The media are excited to learn the details of Fonda’s personal life; the movies with the artist are always reviewed positively and give her numerous prestigious awards. Besides, the woman is fond of sports and inspired generations of young people to start her personal aerobic program. For this reason, Jane is sometimes called “the grandmother of aerobics”.

Jane Fonda was born into a rich American family belonging to a European royal dynasty. The future star was named in honor of Lady Jane Seymour, the third wife of King Henry VIII; she was a distant relative of Jane’s mother.

The family supported the girl’s desire to devote herself to art. Young Jane learned acting and started working as a theater actress and model.

Directors and casting managers did not recognize the woman’s talent: her bright appearance and almost ideal body stood out. Thus, it took some time to conquer the world of cinematography.

Although Jane’s family looked wealthy and prosperous, the relationship with the parents was tragic for Jane. The mother’s suicide shocked Fonda, and the father’s beauty standards led to disastrous consequences: as the actress confessed, she thought she would never be loved if she were not pretty until 35. The father instilled this though in his daughter by bringing new stepmothers to the house.

Jane did her best to meet the beauty requirements imposed on her: she viewed love as something that can only be achieved through appearance and body shapes. There is no wonder this stress manifested itself: as soon as the artist found early signs of aging, she had plastic surgery; from 40 to 50, Jane suffered from bulimia. Fortunately, the star managed to overcome the eating disorder and learned how to live a harmonious life with herself.

In the 1960s, Jane Fonda had her first significant movie works. Still, she was not always seen as a drama actress with great potential: sometimes, her roles were limited to “a very attractive girl.” The movie Joy House with Alain Delon may serve as the example.

Later, the actress appeared in the comedy Barefoot in the Park; Robert Redford became her stage partner. The movie tells the story of the newlyweds who have absolutely different characters. Still, love unites them. The role of Corie Bratter brought Jane Fonda a nomination for the BAFTA as Best Foreign Actress.

In the late 1960s, Jane started receiving the roles that discovered the depth of her talent. In 1969, the artist was nominated for the Academy Award, although she did not win the victory that time. In 1971, she gained the long-awaited prize: the movie Klute brought her the Academy Award for Best Actress.

For the next couple of years, Jane almost stopped working on movies and devoted herself to politics and revolutionary movements together with her second husband. In 1977, the movie Julia came out; the lead role brought the actress the Golden Globe Award. The next year, Fonda won the Academy Award for the second time in her career.

After the successful career in the early 1990s, Jane decided to leave Hollywood so that the audience remembered her young and beautiful. The star found herself in a new sphere: she created a complex of aerobic exercise to keep fit and released a book and videotapes with the author’s activities. Fitness centers named after Jane Fonda were being opened across the United States. According to Jane, she preserved her good shape thanks to continuous self-improvement and high-quality sleep.

In 2017, the popular Russian TV presenter Tina Kandelaki posted a photo on her Instagram where she demonstrated her excellent figure. She wrote: “Yours, Russian Jane Fonda.” Thus, the woman showed she was following the example of the famous American artist.

In the new century, the actress came back triumphantly: in 2005, she played the mother-in-law of Jennifer Lopez’s character in the comedy Monster-in-Law. New large projects followed. Besides, the actress played several episodic and lead roles in series.

The Netflix comedy series about the women’s friendship Grace and Frankie is one of the most notable projects of the recent days. Jane Fonda and Lily Tomlin play the main characters. Despite the eccentric beginning of the project, the audience welcomed the series warmly, and new seasons followed.

In Paolo Sorrentino’s drama Youth, the actress took one of the lead parts. The movie was premiered in may 2015 at the Cannes Film Festival. Jane was nominated for the Golden Raspberry for the role of Brenda Morel. Harvey Keitel and Michael Caine starred in this project as well.

The movie tells the story of two senior men, Fred and Mick, who are best friends. Fred is a famous composer and conductor known all over the world. Mick is an equally popular director. The men go for a vacation to a picturesque place near the Alps, remember their youth, and share their problems. They also watch their children’s lives indirectly. From their life experience, Mick and Fred discuss the behavior of the people around them.

The same year, Fonda played Teddy Stanton in the movie . As the story runs, a writer Jake Davis (Russell Crowe) loses a wife in a car accident and suffers from psychological problems. Jake has a little daughter Katie (Kylie Rogers); her aunt and uncle take care of her. Both Davis and his daughter are influenced by the separation. 25 years later, the writer’s adult daughter (Amanda Seyfried) works at the social service and fights nymphomania and the demons of the past.

In addition, Jane was a dubbing actress in the short-length movie Connected.

There have been numerous rumors about Jane Fonda’s private life. The woman has been married three times. In the mid-1960s, the European director Roger Vadim became her first husband; Jane starred in his movie Barbarella.

At the beginning of the 1970s, Jane left her husband to dive into a new romance with the political activist Tom Hayden. The couple spent 17 years together.

The heavyweight of cable television Ted Turner became the actress’s third husband; after he cheated on Fonda, she divorced him.

Jane gave birth to two children: the daughter Vanessa (named after the actress Vanessa Redgrave) was born in the first marriage, and the son Troy was born in the second. It was Jane who walked her daughter down the aisle on her wedding day.

From the first moments of her screen appearance, Jane Fonda became the icon of style and continued to be one. In recent decades, the artist is notable for her perky pixie haircut: the short, sharp strands of hair dyed in various colors and done in all directions look lively and showy.

Millions of aged women all over the globe copy Fonda’s haircut: it does not make them seem older than they are; on the contrary, it makes the overall image full of energy and adds the spirit of the rebellious 1980s.

As the actress confessed, she sometimes allows herself to smoke weed, even though she had been the proponent of a healthy lifestyle and avoiding junk food, caffeine, and smoking. Jane does not recognize diets and losing or gaining weight suddenly: she pays much attention to the balanced nutrition.

The political activist Jane Fonda, as well as other Hollywood stars, publicly criticizes the actions of the current American President. According to the actress, Donald Trump’s ambiguous and ill-conceived statements and actions may worsen the situation in the country. As a feminist, Fonda particularly criticizes Trump’s attitude toward women. She said she was so shocked to read one of his interviews that she felt like she had been hit by a track for several days.

As a philanthropist, Jane is a member of several social organizations. She and her friends organized a non-commercial foundation helping women succeed in the sphere of media. Since 1994, Fonda is a UN Goodwill Ambassador, and she is engaged in the charity work.

Jane shares her opinion about politics and information supporting social organizations via social networks. The actress prefers text instruments and actively posts on Twitter and Facebook.

In October 2017, the actress officially registered on Instagram; the woman shares personal and working photos and videos with millions of fans.

Fonda has her official website with a blog and fitness forum. Jane’s online shop is also there: people can buy disks with exercises.

In January 2018, the actress said she had health problems: she had a cancer tumor removed from her lip. Eight years earlier, Jane faced oncology: she had breast surgery.

In fall 2017, Jane Fonda played the main character in Ritesh Batra’s drama Our Souls at Night. This is a story of two senior widowed neighbors who begin to sleep together platonically to overcome their loneliness. Judy Greer, Matthias Schoenaerts, and Robert Redford became the actress’s stage partners.

In October, Fonda debuted as a model during the Paris Fashion Week.

In 2019, the fifth season of Grace and Frankie is scheduled. 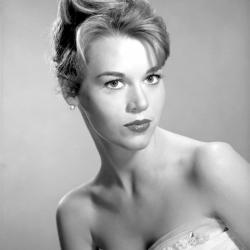