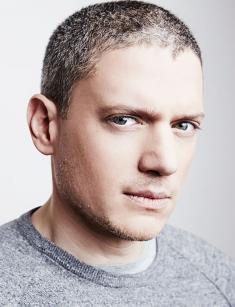 Wentworth Miller is an American actor and screenwriter who became famous for his role as Michael Scofield in the crime series Prison Break.

He was born on June 2, 1972, in the English town of Chipping Norton in the family of lawyer Wentworth E. Miller II, and his wife Roxann, who worked as a schoolteacher. Since both parents were Americans, Miller obtained dual nationality. By the way, the actor is of mixed ancestry. His father is of African and Indian descent, and the mother is of Russian, Syrian and French ancestry.

The family did not stay long in the UK. Wentworth's father only studied at the University of Oxford there. Soon the Millers moved to the United States and settled in Park Slope, Brooklyn.

In school, the young man paid a lot of attention to combating racial inequality because when classmates learned that there were African Americans in his family, they began to bully Wentworth.

For this reason, the parents advised their son not to hide his ancestry studying at Princeton University and to hang pictures of their relatives on the walls to avoid further explanations. But the man took it a step further. Miller published a racial discrimination cartoon. Since the author was fair-skinned, the story had an unexpected twist because Miller gained a bad reputation amongst teachers.

The situation aggravated because the young man spent a lot of time rehearsing and touring with the well-known a cappella group the Princeton Tigertones and missed many lectures. However, Wentworth could defend a graduation thesis "Jane Eyre" and "Wide Sargasso Sea" successfully and graduate with a bachelor's degree in English literature.

But after graduation, the man decided to become an actor. Miller moved to Los Angeles, got a job at the development department of Paramount Pictures, and started attending auditions.

The actor's career path was not easy. For four years, directors continually refused Wentworth Miller until he got a bit part in one episode of the mysterious film Buffy the Vampire Slayer. Then there was participation in the melodrama Time of Your Life and the medical series ER. In 2002, the actor was offered to play the leading role in the fantasy series Dinotopia, where he portrayed sensitive young David Scott. This series won the Emmy Award, but, paradoxically, it did not have an impact on Wentworth Miller’s career.

But the next movie The Human Stain could draw the attention of the public to the unusual actor. Miller had to prove to the director that he was of mixed ancestry, and he even brought a family photo album to the studio. The protagonist of this drama, Coleman Silk, has hidden for many years that he is of African American descent.

Anthony Hopkins played the adult version of the title character. The director’s choice roused the indignation of film critics, who expressed doubt that British Hopkins was suitable for the role of an African American. But these comments did not affect the success of the film.

Later, Wentworth appeared in the thriller Underworld. The film tells about the world of vampires and werewolves, about the war between two ancient clans. Kate Beckinsale and Michael Sheen portrayed the title characters. Wentworth Miller got the role of Dr. Adam. The project was soon followed by a bit part in the adventure action movie Stealth and the leading role in the short drama The Confession.

Wentworth Miller portrayed Ryan Hunter, a young millionaire, in the family television series Joan of Arcadia about a young American woman, Joan (Amber Tamblyn), who can communicate directly with God. Miller’s character can also talk to higher forces, but he uses the information for his own ends.

In 2005, Wentworth became a superstar. The turning point in his career was the crime drama Prison Break, in which he appeared as Michael Scofield breaking his elder brother, Lincoln Burrows (Dominic Purcell), out before his execution for a crime he did not commit. For this role, Miller received the Golden Globe nomination.

Later, the actor played together with Milla Jovovich in the horror film Resident Evil: Afterlife and with Karl Urban in the thriller The Loft. It should also be mentioned that Miller writes scripts for movies under the pen name Ted Foulke. For example, he wrote the story for the psychological thriller Stoker, featuring the stars such as Mia Wasikowska and Nicole Kidman.

In 2014, the actor agreed to play in the superhero TV series The Flash, where he got the role of Captain Cold, the leader of a team of villains, who opposed the title character, The Flash (Grant Gustin). The first season of the series was broadcast on The CW. It attracted the attention of viewers and received high ratings, so the project was renewed for another three seasons.

In 2016, Wentworth's filmography included the work in Legends of Tomorrow, the sequel to the superhero TV series The Flash, where the actor also portrayed Captain Cold. The film featured Miller's colleague on the TV series Prison Break, Dominic Purcell.

For a long time, Wentworth Miller’s private life was enveloped in mystery. The actor has repeatedly said that he was going to build a strong relationship and start a family. Only in August 2013, Miller decided to state that he was gay. The man hid his sexual orientation because he feared that it would be a bad influence on the career.

Wentworth had come out as gay before he declined an invitation to attend the Saint Petersburg International Film Festival. The American actor protested against discrimination of gay citizens in Russia and the adoption of the law which banned propaganda of nontraditional sexual relations.

According to Miller, as a teenager, he even attempted suicide because he must continuously dodge and lie. The actor still does not tell about his partners, but, according to the social media, Wentworth dated Canadian actor Luke MacFarlane, American colleague Kristoffer Cusick, and photographer Mark Liddell.

For the last two years, Wentworth Miller’s main project has been the series Prison Break again. In 2017, the continuation of the crime action movie premiered on Fox. The producers decided not to change the main cast. In the fifth season, Miller's hero, Michael Scofield, who survived an explosion, becomes a prisoner in Yemen. His girlfriend and brother help him escape. Despite the popularity of the previous seasons, viewers were not enthusiastic about the new series, and the ratings of the series declined.

But in 2018, Dominic Purcell has reported on Instagram that the TV channel does not intend to close the TV series Prison Break and is preparing a script for the sixth season. It is expected that Wentworth Miller, Dominic Purcell, Sarah Wayne Callies will play the leading roles again. Nowadays, the representatives of the TV company create a work schedule that would be convenient for all invited actors.