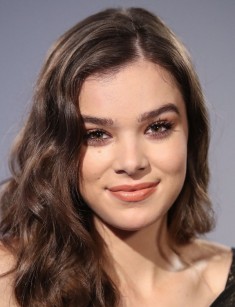 Hailee Steinfeld is an American celebrity who works in different spheres. The girl is known in the world of cinema, music, and fashion.

Hailee Steinfeld was born on December 11, 1996, in the southern part of California in the neighborhood of Tarzana (San Fernando Valley). She grew up in the family with her older brother Griffin. Mother Cheri was a professional interior designer, father Peter was a personal fitness trainer.

The girl has chosen show business on purpose. In the childhood, she was surrounded by people of creative occupation. Father’s brother Jack was an actor, her maternal grandfather Larry Domasin had an acting career too (he was a child actor). Her cousin, True O'Brien, who played in films and was involved in the modeling business, inspired the girl to try acting as well.

Hailee studied at the Ascension Lutheran School, Conejo Elementary, and Colina Middle School. She was home-schooled from 2008. In 2015, Hailee graduated from the school.

Hailee Steinfeld first appeared on the screens at the age of eight. She was invited to play in TV shows for teenagers and commercials. In 2010 the actress got a big part in the western True Grit, shot by the Coen brothers. The plot is based on Charles Portis’ novel. Hailee played together with Jeff Bridges and Matt Damon, who at that time were Oscar winners.

The premiere of the film took place on December 22 and it was the smash hit in America for more than a month. True Grit had huge box office grosses. In Europe, the movie opened annual Berlin International Film Festival.

In 2011, she was nominated for the Oscar for Best Supporting Actress, as well as for the BAFTA Award for Best Actress, and she won the Young Artist Award.

In 2013, Hailee Steinfeld got one more big part in the film Romeo & Juliet where she played the role of Juliet together with Douglas Booth. The role was originally intended for Lily Collins, but then Steinfeld was cast.

At the time of filming the actress was fifteen years old, and director Carlo Carly had to change the script to make it age-appropriate without a nude appearance. The same year, the film Ender's Game was released. Hailee’s partners were Harrison Ford and Asa Butterfield. In 2013, attractive young Hailee was invited to shoot for Harper's Bazaar magazine.

In 2014, the new film, written by Luc Besson, was released. In the film 3 Days to Kill Hailee played the role of Zooey, the daughter of the protagonist (Kevin Costner), who before his death decided to spend the remaining time with the child. Connie Nielsen played her mother. In addition to successful roles in several films, in 2015 Steinfeld starred in the music video for Taylor Swift’s single “Bad Blood.”

Hailee Steinfeld is not only a talented actress but also a singer. We can say that the start of her musical career was the film Pitch Perfect 2. The actress was offered to collaborate with the Republic Records after the release of the cover version for the song “Flashlight.”

In 2015, she released the song “Love Myself” and then the first album Haiz. A year later, Hailee and Joe Jonas’ DNCE band shot the music video for the song “Rock Bottom.” The girl also sang the song “Stitches” with Shawn Mendes. In 2017 she released the next hit song “Most Girls.”

Hailee talks about her private life willingly, although she tries not to mention all details. In 2017, the media suggested that she had a love affair with Justin Bieber because young people often appeared together. These rumors remained only rumors. The same year, Hailee officially stated that her boyfriend was Cameron Smoller. Fans rejoiced because Justin was free again. The relations among young people did not work out.

In the winter of 2018, journalists suggested that the actress had an affair with the former member of One Direction, Nylon Horan. Hailee and Nylon attended the Backstreet Boys concert in California. The photos from the concert spread on the Internet. The celebrities did not comment on the situation for a long time.

Hailee aroused the curiosity of subscribers on Twitter with a new photo in a T-shirt with the name of Nylon. The photo was taken during Horan’s concert behind the scenes. Some sources believe that the actress and singer have a relationship.

By the way, the stars did not comment on this photo. Fans can only guess how their friendship developed and turned into love. Fans are afraid because soon Hailee will have the concert tour with Charlie Puth.

The most anticipated premiere of 2018 was the spin-off of the Transformers. People expect the amazing film Bumblebee directed by Travis Knight. Hailee appeared in the film in the role of Charlie Watson. Although the movie is planned for the middle of the winter of 2018, the spin-off trailer can be seen right now. For example, people can see it on official fan groups on Instagram or on fan sites in Russia.

Peter Ramsey and Bob Persichetti’s premiere Spider-Man: Into the Spider-Verse will be in December 2018. A new version of the familiar spider will be an interesting event in the world of cinema. Hailee Steinfeld voiced one of the characters.