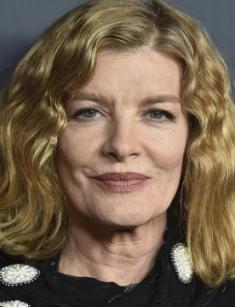 Rene Russo made it into the world of show business on her own. Fans of the actress know what difficulties she faced on the way to fame, and the strength of the actor’s character never fails to amaze them.

Rene Russo was born on February 17, 1954, in Burbank, California. The father of the future celebrity, Nino Russo, left the family when the child was two years old. The girl’s mother had to raise two children.

Rene studied at Burroughs High School. When the girl was ten years old, she was diagnosed with scoliosis, and for the next four years, Rene wore a corset. Due to the difficult situation in the family, Russo often felt lonely, and spinal problems completely undermined her self-confidence. However, when she got rid of the corset, it did not save the situation.

It turned out that Rene was taller than her peers, and they nicknamed her "Jolly Green Giant." Problems with classmates, guilt caused by the fact that the mother was forced to work two jobs to raise her daughters, made the girl leave school. She worked as a movie theater cashier and in an eyeglass factory.

In her youth, the girl was an ardent fan of The Rolling Stones and dreamed of becoming Mick Jagger's wife. One day she attended a concert of her beloved group, where John Crosby saw the beautiful lady. Impressed by the attractive brunette, he gave the girl a business card and asked to call to take some photos for colleagues in Los Angeles. And Rene Russo did it. It was the beginning of her modeling career.

The beautiful girl impressed not only Crosby, who became the agent of the future artist, but also the Ford Modeling Agency. Rene moved to New York City, where she began filming for the Revlon commercials. The girl was anxious, but the world-famous photographer, Richard Avedon, who took her photographs, brought Rene into the fold.

Rene Russo was at the peak of popularity. When the girl turned 19 years old, she posed for the cover of Vogue. The popularity ensured her financial independence. The girl bought a house for herself and her mother, paying the woman for the hardships they suffered in the past.

The girl did not go crazy for fame. She understood that the modeling career would not last a lifetime, and she should think about the future. While participating in the shooting of the pregnancy catalog, she realized that it was time to move on. After completing the work, Rene went to Crosby and asked to help her in the world of cinema. So, Rene Russo began an acting career.

She got the first leading role in the series Sable in the mid-80s. The TV show did not last long, but the young woman was noticed, and in 1989, she appeared in the movie Major League, in which she played the girlfriend of the title character. It was followed by the film Mr. Destiny with Jim Belushi and One Good Cop with Michael Keaton.

The actress made a breakthrough in 1992. Rene got a role in the comedy action movie Lethal Weapon 3 with Mel Gibson and Danny Glover. The appearance in the movie, featuring such stars, did not go unnoticed. Before Lethal Weapon 3, the woman had starred in the project Freejack, in which she met her childhood dream, Mick Jagger. However, the artists did not impress each other.

In the 90s, Rene Russo became the ideal of beauty; the Americans wanted to see such a strong woman who could stand up for herself on an equal footing with men and kept her chin up under any circumstances. The actress played a similar role in the movies In the Line of Fire with Clint Eastwood, Outbreak with Dustin Hoffman, Ransom, and Lethal Weapon 4 with Mel Gibson.

But the filmography of the actress extended beyond the roles of strong women. In 1995, fans saw Rene with Danny DeVito, and Gene Hackman in the comedy Get Shorty. It was followed by two leading roles in the romantic comedies Tin Cup and Buddy.

In 1995, the actress played the role of a passive unhappy woman in the movie Ransom, but this experience did not bring results. The heroine does not resemble the character of Russo. At the beginning of the 21st century, the actress starred in the cinematic flop The Adventures of Rocky and Bullwinkle. It was followed by two more unsuccessful projects, Big Trouble and Showtime.

In 2005, Rene appeared in the movie Two for the Money, in which she acted as a producer. Then she starred in the film Yours, Mine and Ours. Later, Russo did not appear in movies for six years. In 2009, the actress remembered her past as a model. She became the model for the advertising campaign of the shoe brand Brian Atwood. Many people mentioned that the photos of the chic artist were stunning.

In 2011, the movie Thor, based on the Marvel Comics characters, was released. Rene returned to the role of a strong woman, playing Frigga, Queen of Asgard, the wife of Odin, the mother of the protagonist. In 2013, the continuation of the film, Thor: The Dark World, was released, in which Rene Russo portrayed Frigga again.

For her role in the 2014 movie Nightcrawler, the actress won the Saturn Award for Best Supporting Actress and received the BAFTA Award nomination. In 2015, the comedy The Intern was released, starring Robert De Niro and Anne Hathaway. In the movie, the woman appeared as masseuse Fiona, who attracted the attention of De Niro’s hero.

The personal life of Rene Russo has become successful. She married Dan Gilroy in 1992. Russo's husband works as a screenwriter. The couple met on the set of the film Freejack. Russo wanted to turn down the role in the movie, but Gilroy was not going to rewrite the script. Having met, they changed their minds and eventually began work on the film.

In 1993, their daughter, Rose Gilroy, was born in the family.

Russo admitted in an interview that she was struggling with bipolar disorder.

As of 2017, Rene Russo was one of the highest-paid actresses in Hollywood.

Unlike most celebrities, Rene Russo does not have a page on Instagram. But since November 2017, the star has a fan page where fans post photos of their favorite actress.

Rene Russo has a net worth of $40 million.