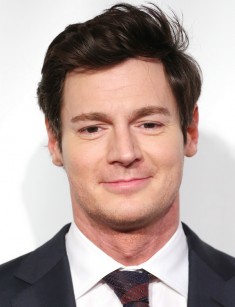 The American actor who is well-known due to his role of the president Abraham Lincoln in the movie "Abraham Lincoln: Vampire Hunter". He is married to the actress Kaya Scodelario.

Benjamin Walker was born on the 21st of June, 1982 in the town of Cartersville, U.S. Benjamin's father was a businessman and had a movie rental store, and his mother was a teacher of music. Benjamin was the second child in his family, and he has an elder brother.

The actor began to dream about the acting career already in his childhood that’s why Benjamin started to take part in the performances at school. When the future actor finished the secondary school, he went to Michigan where he entered the Arts Academy. Then Benjamin went to New York, where he was studying at the Juilliard School where he studied at acting courses till 2004.

Benjamin Walker received his first role in the film the same year that he completed the acting course. The actor performed the part of the leading character in his youth in the biographical drama "Kinsey". The movie tells the story of the professor Alfred Kinsey who made a significant contribution to the research of human sexuality and attracted public attention to many subjects which were considered to be tabooed earlier.

At the same time, Benjamin Walker participated in the comedy shows in Los Angeles and New York. In 2007 the actor took part in the play on the Broadway which was called "Inherit the Wind". Walker also took part in other theatrical projects on the stages of various theaters and at festivals. The actor inspired by Broadway projects even refused to take part in the shootings of the movie "X-Men: First Class" for the significant role in the musical.

In 2006 there was released a military-historical drama "Flags of Our Fathers" in which Walker performed the supporting role of Harlon Block. Clint Eastwood became the director of this movie. This film tells the battle between the Japanese and American soldiers for the island of Iwo Jima during the World War II.

In 2009 the actor appeared on the screen in the crime drama "The War Boys" as David, one of three friends since childhood. According to the plot, David left to study at the college. In a short time, he was intentionally expelled so that he could come back to his native town to his friends without whom he doesn't imagine his life. These three friends have an unusual entertainment - they catch illegal emigrants on the streets and turn them to the authorities.

In 2011 the actor got the supporting role of the clerk in the comedy "Wolfe with an E. ". The leading character of this picture is a musician from Los Angeles - Henry Wolfe. To see him the music journalist together with his friend — the science - fiction writer set-off to Hollywood. Their travel is full of the adventures and challenging situations.

In 2012 the actor performed the role of Abraham Lincoln, the 16th U.S. President and the liberator of American slaves. This movie is not biographical, but it's a fantasy action movie with the elements of horror. Tim Burton and Timur Bekmambetov shot the film "Abraham Lincoln: Vampire Hunter" by the mash-up novel of the same name written by the American writer and scriptwriter Seth Grahame-Smith.

According to the plot, the vampire kills the mother of little Abraham Lincoln. After that, the future U.S. president wants to revenge. The opponents of the character want to transform the U.S. into the vampire country. To avoid this, the hero starts the political career and becomes the U.S. president. With his new office, he gets the chance to unleash the full-scale war where vampires fight on the side of the Southerners.

In 2013 Walker presented the character of Kevin Connolly in the biographical movie "Muhammad Ali's Greatest Fight". This movie tells the story of the world famous heavyweight boxer. In the center of the plot is the trial against Muhammad Ali when the boxer refused to do military service and to participate in the Vietnamese war for religious reasons.

In 2015 there was released the adventure thriller "In the Heart of the Sea" based on real events. In this movie, Walker performed the role of George Pollard Jr., the captain of the whaling ship "Essex" attacked by the cachalot. The seamen who had survived were forced to spend three months between the sky and the sea trying to find help in vain. When they ran out of food, they had nothing to do but to become cannibals to survive.

In 2016 the romantic drama "The Choice" came out on the screen. In this movie, Benjamin Walker played the leading role together with Teresa Palmer. The picture tells the story of two neighbors who fell in love with each other at first glance. By that time both characters already had relations that's why it was difficult to choose this new love affair and plans.

In 2017 the actor played the character of Zeke Sikes in the detective drama "Shimmer Lake". The principal character is the sheriff of the small town. He is an ordinary and honest guy who catches criminals and stands for the justice protection during all his life. Once, the unknown gang robbed the local bank. The criminals acted with skill and didn’t leave any traces and marks. The sheriff desperately tries to track the robbers and collects the evidence bit by bit. The hero is ready for anything to get justice.

Mamie Gummer, the American actress, and Meryl Streep’s daughter became the first wife of the actor. Mamie herself is famous due to her significant role in the drama series "Emily Owens, M.D." which came out on the screen in 2012.

The actors got acquainted during their collaboration on the movie set of the comedy "Coach" where both of the actors received supporting roles. The spouses were together for two years, and in the spring of 2013, they divorced.

The actress presented the role of Teresa Agnes in the range of the movies of "Maze Runner". Also, she is famous due to her role of Carina Smyth Barbossa in the movie "Pirates of the Caribbean: Dead Men Tell No Tales" (2017).

In the winter of 2014 actors have engaged and in a year they celebrated their wedding. In 2016 Kaya gave birth to their son from Benjamin.

In 2018 the actor took part in two projects - the movies "The King's Daughter" and "Look Away". The leading character of the movie "King's Daughter" is the eighteen-year-old princess, the daughter of the King of France Louis XIV.

The distraught Sun King decides that he deserves eternal life. With such desire, he comes to the sorcerer who tells his majesty that he can make the elixir of eternal life if he finds the real mermaid. However, it turns out that hunting for the mermaids is not so easy. The guard of the siren and the rebellious daughter of Louis XIV are against King’s decision. In this movie, Benjamin Walker played the role of Yves De La Croix.

The drama comedy "Look Away" tells the story about the girl who has an unusual mental disorder. The heroine practically can't see and hear her mother who lives together with her. The eccentric local psychiatrist had to help the girl to cope with her problems. Though, instead of recovering, the heroine fell in love with him. In this movie, Benjamin Walker played the role of Farmer. 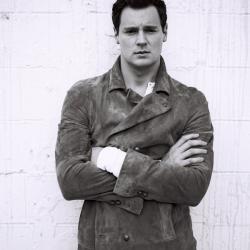